Below are the monthly updates from the most current February 2021 fuel price data (GasBuddy.com) and December 2020 electricity and natural gas price data (US Energy Information Administration).

Much of the legislation establishing the state’s climate change program elements has sidestepped the question of costs, to households, to employers, and to the cost of providing public services. In many cases, these issues were handed off to the rulemaking phase rather than explicitly considered in the legislative process. In others, cost concerns were dismissed through the traditional response that: (1) costs would be minor and therefore absorbable or (2) costs although high at the beginning would over time go down as the result of economies of scale.

In the case of electricity, an additional response focused on the fact that because of its climate, California historically had lower utility bills than almost all of the other states. In pursuing SB 100 (Chapter 312, Statutes of 2018) to shift the state to 100% zero emissions electricity by 2045, proponents in fact claimed that somewhat higher rates although likely were not significant, because “. . . There is a difference between rates and retail. When it comes to utility bills for residential customers, we are actually the fourth lowest in the United States . . .”

This contention from the beginning was misleading. Utility bills vary widely across the state, with Energy Commission data showing that average electricity use in the lower income interior regions is as much as 59% higher than in the milder climate, higher income coastal areas. Individual counties show even greater variations in average household use. And beyond this aspect of the issue, costs are rising for every other core cost of living. Any rise in utility bills adds to the growing shift in disposable incomes to spending on the core necessities and cost-driven reductions in effective incomes.

This contention has also turned out to be wrong. The relentless rise in electricity prices as a result of state policies saw California average bills soar to the 21st highest in 2020. The average annual bill in the latest preliminary data is only $4 below the average for the other states, and much higher in the interior regions. The state is now on track to transform what previously was one of the few cost advantages of living in the state into monthly bills that exceed the national average and are on their way to becoming some of the most costly in the nation.

The state’s policies have produced rapid price rises for other energy use as well. Comparing relative California prices in 2010—when the state’s Early Action Items under AB 32 for the climate change program began—to the latest month data, California’s policies have caused prices to soar in all areas, 41% higher than the average of the rest of the US for both residential electricity and for gasoline and ranging up to nearly three times as high for industrial costs. In many cases, these gaps have widened as prices have continued to climb in California while dropping compared to 2010 in the other states—reducing overall costs of living and increasing effective incomes in other parts of the country, and making businesses more competitive and able to produce jobs. For California, energy prices that were already high in 2010 have gotten higher, and even those uses that were an advantage for living in this state have gone in reverse.

These costs are slated to keep growing. Recent analysis by the Public Utilities Commission expects residential electricity rates charged by the three investor owned utilities (IOUs) to grow another 41% to 58% over the next 10 years. Overall household energy bills (electric, natural gas, gasoline) in the hotter regions of the state are estimated to grow by 55%. This report also cautions that “. . . in order to avoid large increases in energy bills, customers will need to adopt technologies that require large up-front investments.” In other words, households will have no choice but to pay for rising energy costs in only one of two ways: higher monthly bills or paying large upfront costs for modifications to their homes and energy using equipment. Lower income households unable to pay for these improvements will only have the first choice in the absence of new subsidies or cost shifting, which based on current practices would only cause rates to go higher still.

Another recent report from Next10—which previously has argued higher electricity prices have had a beneficial outcome by presumably making California companies more efficient as opposed to improving the numbers by causing more energy-intensive operations to move to other, lower energy cost states—acknowledges that California’s electricity rates are some of the highest in the country, and raises concerns over the ability of low and average income households to afford even the basic costs of energy. The report expects the disparate effect of high energy costs to grow worse over time as higher income households escape high rates by buying solar panels and other distributed energy options, exercising their option to “adopt technologies” as cited in the PUC report but leaving lower and average income households responsible for paying a larger share of the fixed costs embedded in the utility pricing rates. The report’s recommendations, however, focus mainly on shifting the billing for energy from utility rates to taxes, changing only how these growing costs are paid rather than attempting to bring them under control.

Energy rates matter because they have produced growing energy bills. Households pay these directly, with households paying a large share of total housing costs in their utility bills, as broken down by state, county, and legislative district in the Center’s Affordability Index, and as housing costs force more into commuting longer distances to find housing they can afford. Households also pay these costs indirectly as higher energy bills get incorporated into the rising prices for every other basic cost of living.

High energy costs can also have an effect on the state’s competitiveness for jobs, especially as firms move back office or ancillary operations to other states. A recent example comes from state government itself. The state Medi-Cal website was out of service for 3 days during the recent winter snowstorms, preventing enrollees from submitting claims and doctors from authorizing treatments. The disruption did not come from any internal issues, but was because the state’s primary data center was located in Texas due in part to the much lower energy costs to run it.

California is often touted as the leader in climate change policies. As indicated previously, the state certainly has been the leader in the cost of its particular approach to climate change, with its heavy emphasis on fees and a constantly expanding body of proscriptive regulations. The most recent data from US Energy Information Administration indicates the state ranks far lower based on the emission reductions achieved through its high regulation approach.

Considering the period since its current climate change program began in 2010 with the AB 32 early action items, California’s energy related emissions reductions rank below what 36 other states have been able to achieve. Overall, California energy related emissions were down 0.3% under its approach to climate change, compared to an average drop of 5.8% for the rest of the US. 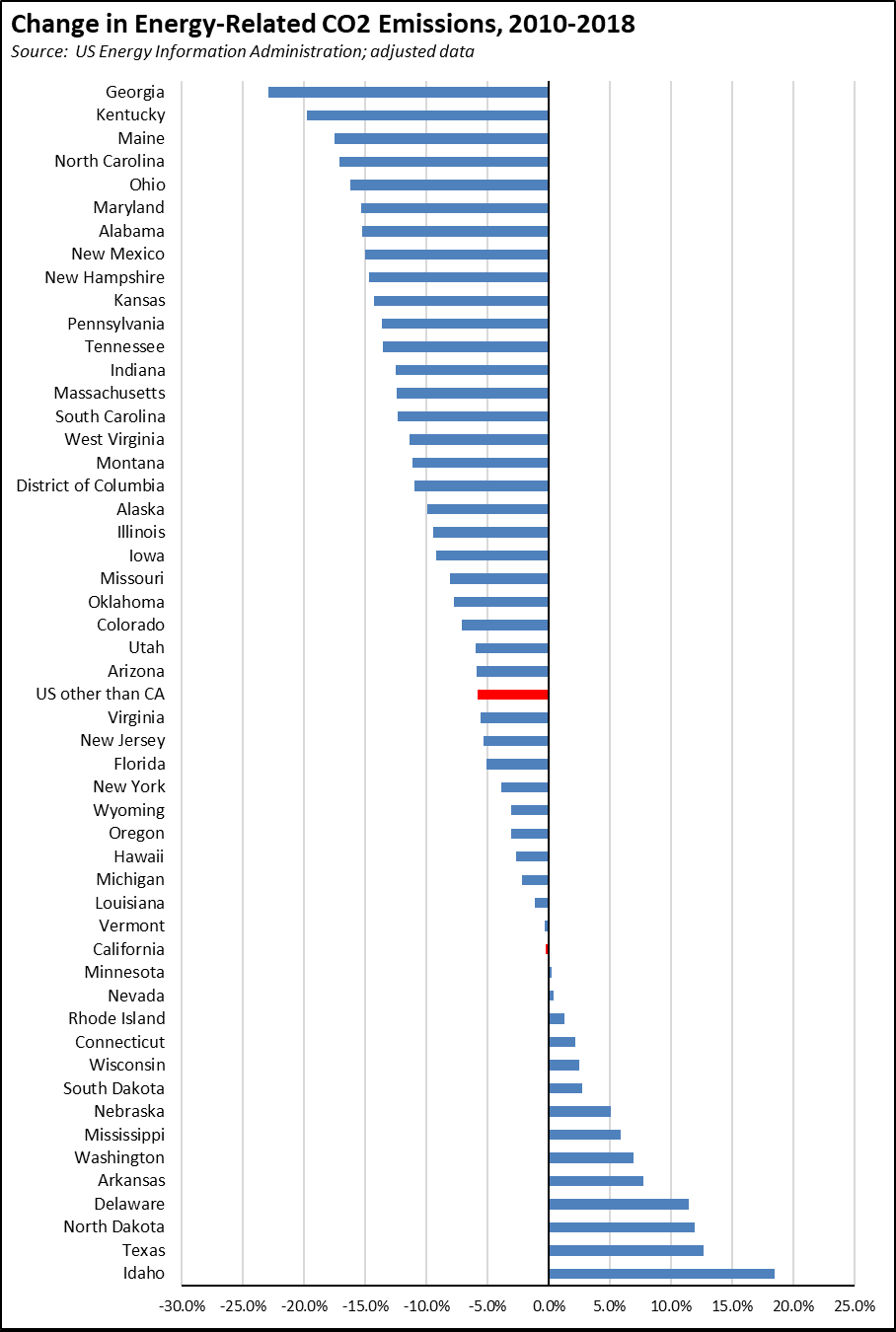 Although more variable, emission reductions in the other states have been deeper than in California. After the recession-induced declines at the beginning of this period, California instead saw emissions begin to rise again, largely because of increases coming from transportation. 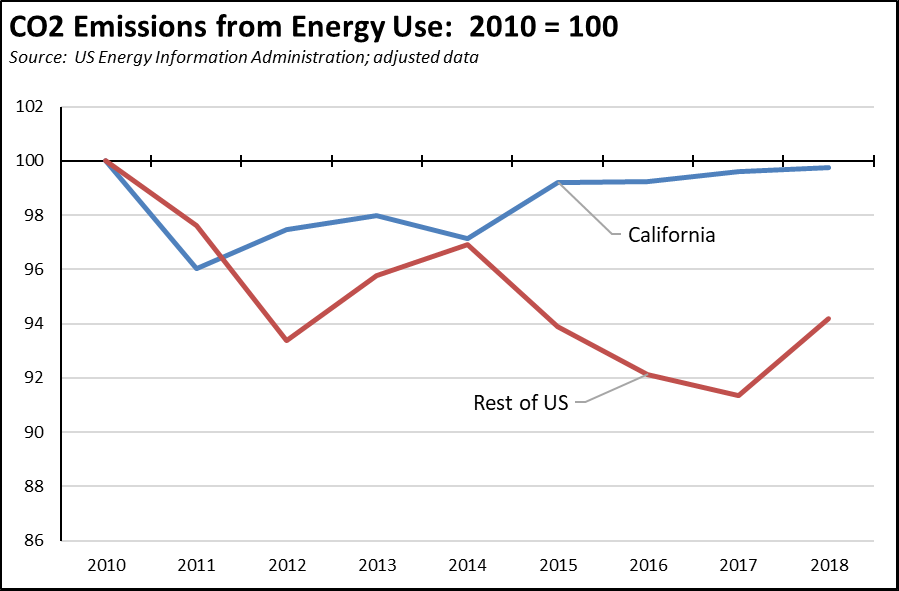 Looking over a broader period since 1990, emission reductions in the other states have been far deeper than in California. 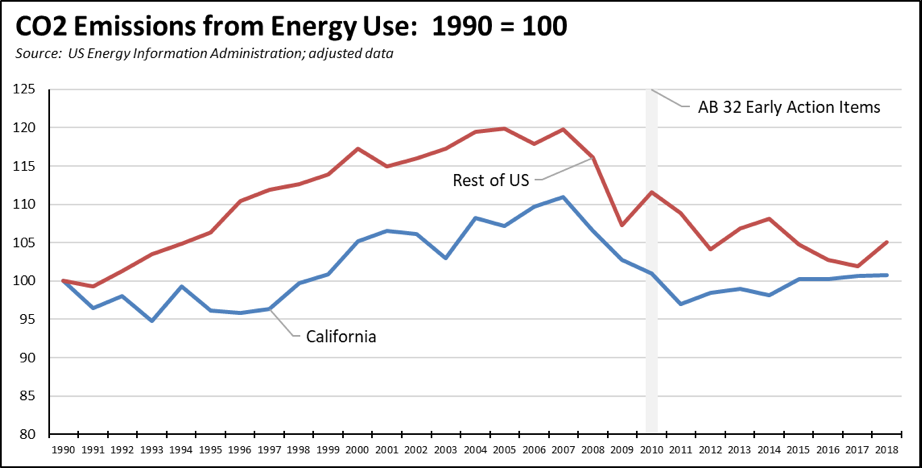 While the 2018 data shows an increase in emissions—larger for the other states—results for 2020 are likely to show another recession-induced drop for both California and the rest of the country, along with longer term sustained declines coming from higher levels of telecommuting. But while employers rapidly adapted their practices to enable telecommuting to achieve both the income and environmental results it has produced to date, state policies have yet to make any comparable changes, in particular to provide the flexibility required to sustain substantial emission reductions far beyond anything the state has yet to achieve through its transportation policies.

The State Auditor recently released a report criticizing the Air Resources Board for failing to measure the actual emission reductions achieved by its various climate change regulations and programs. Particularly since the federal government likely now will consider adopting some of California’s actions more broadly, a full consideration should first be made of the high costs coming from this state’s approach, the actual emissions that have been reduced, and the degree to which less costly approaches can achieve the same or even greater result.

California vs. US Fuel Price Gap at 40.9% Premium

$1.04
Price Per Gallon
Above US Average
(CA Average)

The February average price per gallon of regular gasoline in California rose 4 cents from January to $3.57. The California premium above the average for the US other than California ($2.53) eased a penny to $1.035, a 40.9% difference.

In February, California again had the highest gasoline price among the states and DC. Californians paid $1.30 a gallon more than consumers in Mississippi, the state with the lowest price.

The February average price per gallon of diesel in California eased 19 cents from January to $3.74. The California premium above the average for the US other than California ($2.77) remained at 97.1 cents, a 35.0% difference.

In February, California again had the 2nd highest diesel price among the states and DC, behind only Hawaii.

$1.10
Price Per Gallon
Above US Average
(Central Sierra Region)

California average Residential Price for the 12 months ended December 2020 was 20.51 cents/kWh, 61.6% higher than the US average of 12.69 cents/kWh for all states other than California. California’s residential prices remained the 6th highest in the nation.

$7.4b
Premium Above
US Average Price

For the 12 months ended December 2020, California’s higher electricity prices translated into Residential ratepayers paying $7.4 billion more than the average ratepayers elsewhere in the US using the same amount of energy.

California average Commercial Price for the 12 months ended December 2020 was 17.72 cents/kWh, 77.0% higher than the US average of 10.01 cents/kWh for all states other than California. California’s commercial prices remained the 3rd highest in the nation and the highest among the contiguous states. Only Alaska and Hawaii had higher commercial prices.

California average Industrial Price for the 12 months ended December 2020 was 14.42 cents/kWh, 131.1% higher than the US average of 6.24 cents/kWh for all states other than California. California’s industrial prices remained the 4th highest in the nation. Among the contiguous states, only Rhode Island had higher industrial prices.

For the 12 months ended December 2020, California’s higher electricity prices translated into Commercial & Industrial ratepayers paying $12.0 billion more than ratepayers elsewhere in the US using the same amount of energy.

Average prices ($ per thousand cubic feet) for the 12 months ended December 2020 and changes from the previous 12-month period for each end user: