Below are the monthly updates from the most current July 2022 fuel price data (GasBuddy.com) and May 2022 electricity and natural gas price data (US Energy Information Administration).

While prices in California remain far above the average for the rest of the US, proponents for the state’s current approach to energy regulation often maintain that prices don’t matter, energy bills do and energy costs overall should be lower in California due to its milder climate and continued expansion of public transit in yet another effort to reduce overall vehicle miles traveled. These justifications continue to be heard in the policy debates even though the soaring rise in prices has meant California went from the 9th lowest average household electricity bill in 2010 when the state’s current regulatory expansion began, to the 21st highest in the latest data from US Energy Information Administration Agency. They are considerably higher in the lower income interior regions of the state.

These justifications continue to be used even though data from US Department of Transportation on transit ridership (unlinked passenger trips) shows use of public transit was plunging in the state even prior to the pandemic—down 20% in the last quarter of 2019 compared to the peak in the 3rd quarter of 2008. Ridership then collapsed to 77% below the peak in 2019, and through the second half of 2022 still remains at only half of the 2008 level. Californians remain dependent on their vehicles, and California energy policies make use of those vehicles more costly than in any other state. 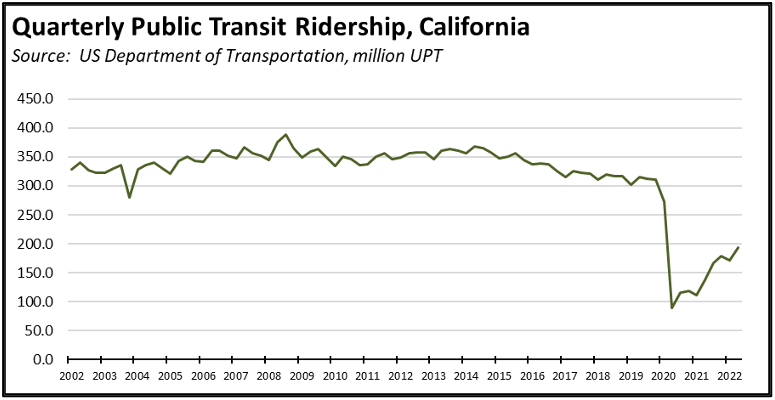 As recently stated by the Air Resources Board transportation member, Daniel Sperling, at the June 24, 2022 hearing on the Draft Scoping Plan:

“So I appreciate all of the enthusiasm for reducing VMT. Ain’t going to happen. It’s failed and it’s going to continue to fail, because of the land-use patterns we have, the car-centric transportation system we have, the sprawl we have. And I would point out that, you know, people that say, okay, let’s increase transit. Well, before the pandemic, transit had been decreasing their mode share. They were — it was — it was slowly decreasing for many, many years. And it was less than two percent — it got down to less than two percent of passenger miles were carried by transit, pre-pandemic. And now it’s gone considerably below that two percent. So, we’re probably at one and a half percent now. We could double it. It would make no difference.

“. . . not to trash transit, but we need to be realistic about what we can do. And right now, transit is going to fall off a cliff. It’s been declining. It’s been kept alive the last couple years because of massive additional federal subsidies that are going to disappear. We’re going to be lucky if we can keep transit. And I’ll call it legacy transit where it is.

“So, I just want to say from our point of view, from a climate perspective, that is not the solution –not legacy transit.”

Since the state’s climate change program began, even former Governor Jerry Brown acknowledged that the state’s efforts would have an effect on global emissions only if the state as a leader produced policies that would be adopted more broadly by other states and other nations. Even if California went to net zero and eliminated all its current emissions, projected growth in China alone would replace this amount let alone increases in India, Africa, and other developing regions of the world. California’s policies are capable of working only if they are embraced by other areas.

As reflected in the monthly results discussed in more detail below, California’s policies instead have produced soaring burdens on households and businesses because the legislation and regulations are being adopted without full consideration of the cumulative costs.

In the results from June, nonfarm jobs increased by only 19,900—the lowest monthly gain since last September—in California while 6 states posted larger numbers ranging from 21,200 in Pennsylvania to 82,500 in Texas. Taking these states as a sample, adoption of California’s energy policies would also mean adopting California’s energy costs. The effect is shown in the table above using: (1) the most recent 12-month results for electricity use and prices, (2) most recent July average regular gasoline cost and an average use of 581 gallons for one vehicle annually from US Department of Transportation, and (3) the additional cost that would come if local prices were as high as California’s.

The lowest impact would be on New York, but of the states shown, New York is the one that has gone the farthest in adopting California policies. Embracing California’s policies would be a much more costly and harder sell in the other states just considering the effects on these two energy components, let alone the effects on housing and other basic costs of living coming from the state’s policies as they now exist.

California vs. US Fuel Price Gap at 36.1% Premium

$1.51
Price Per Gallon
Above Other States’ Average
(CA Average)

The July average price per gallon of regular gasoline in California eased 53 cents from June to $5.83. The California premium above the average for the US other than California ($4.32) eased marginally to $1.51, a 34.9% difference.

In July, California had the highest gasoline price among the states and DC. Californians paid $1.89 a gallon more than consumers in South Carolina, the state with the lowest price.

$1.24
Price Per Gallon
Above US Average
(CA Average)

The July average price per gallon of diesel in California eased 35 cents from June to $6.62. The California premium above the average for the US other than California ($5.38) eased to 124.4 cents, a 23.1% difference.

In July, California had the highest diesel price among the states and DC.

$1.91
Price Per Gallon Above US Average (Los Angeles Region)

California average Residential Price for the 12 months ended May 2022 was 23.91 cents/kWh, 78.8% higher than the US average of 13.37 cents/kWh for all states other than California. California’s residential prices were again the highest among the contiguous states.

In 2010, California had the 9th lowest residential electricity bill in the nation. In the latest data, it had the 21st highest.

Residential bills, however, vary widely by region, with the estimated annual household usage in 2020 as much as 78% higher in the interior regions compared to the milder climate coastal areas, and substantially higher when comparing across counties.

$9.4b
Premium Above
US Average Price

For the 12 months ended May 2022, California’s higher electricity prices translated into Residential ratepayers paying $9.4 billion more than the average ratepayers elsewhere in the US using the same amount of energy.

California average Commercial Price for the 12 months ended May 2022 was 19.94 cents/kWh, 85.1% higher than the US average of 10.77 cents/kWh for all states other than California. California’s commercial prices were again the highest among the contiguous states.

California average Industrial Price for the 12 months ended May 2022 was 15.74 cents/kWh, 121.7% higher than the US average of 7.10 cents/kWh for all states other than California. California’s industrial prices were again the 3rd highest among the contiguous states.

$14.5b
Premium Above
US Average Price

Average prices ($ per thousand cubic feet, 12-month moving average) for the 12 months ended May 2022 and changes from the previous 12-month period for each end user. In May, California was again the 6th highest among the contiguous states for commercial rates and 5th highest for residential rates. Industrial rates, however, moved from 4th to 3rd highest.