Below are the monthly updates from the most current June 2021 fuel price data (GasBuddy.com) and April 2021 electricity and natural gas price data (US Energy Information Administration).

Continuing the trends indicated in prior reports, energy prices rose across all sources, keeping energy costs for households and the state’s employers at or near the top for the nation. While the state’s policies remain focused on equitable recovery, state actions as reflected in the regulations driving up these basic costs of living undermine the ability of many households, especially lower income but increasingly middle income as well to move ahead economically. Wage and income gains for many continue to be outmatched by the rise in daily costs.

Equity is not a new concern. One of the underlying tenets of the New Deal during the Great Depression was to recover but also expand prosperity to those parts of the nation that had been left behind, and central to this effort was rural electrification and other energy-based economic development efforts such as the Tennessee Valley Authority. The concept of affordable and reliable energy was considered a predicate to economic progress. California through state actions now appears to be reversing course on these goals, targeting energy policies to the higher income coastal areas that can afford these costs and putting many in the lower income regions further inland increasingly at risk to energy cost-driven poverty.

The rise in electricity costs has been so steep that a recent UC Berkeley study reported that in parts of California, the cost per mile of driving an electric vehicle is now more expensive that a reasonably fuel-efficient gasoline vehicle. The outcomes of the energy policies not only undermine the state’s fundamental economic goals; they are also beginning to work at cross purposes to themselves.

California vs. US Fuel Price Gap at 41.9% Premium

$1.26
Price Per Gallon
Above US Average
(CA Average)

The June average price per gallon of regular gasoline in California rose 10 cents from May to $4.26. The California premium above the average for the US other than California ($3.00) rose to $1.26, a 41.9% difference.

In June, California again had the highest gasoline price among the states and DC. Californians paid $1.53 a gallon more than consumers in Mississippi, the state with the lowest price.

Effective July 1, 2021, the state motor fuel tax increased $0.006 per gallon, keeping California’s fuel taxes the highest among the states. The increase accounts only for the fuel tax portion. In addition, sales and use tax is applied against the full per gallon cost—the cost of fuel plus the cost of the taxes—charging a tax on a tax along with other taxes and fees.

The June average price per gallon of diesel in California rose 6 cents from May to $4.21. The California premium above the average for the US other than California ($3.16) was $1.05, a 33.4% difference.

In June, California had the 2nd highest diesel price among the states and DC, behind only Hawaii.

Effective July 1, 2021, the state diesel fuel tax increased $0.004 per gallon, keeping California’s diesel taxes the highest among the states. As with gasoline, the fuel tax is charged along with other taxes and fees including sales and use tax.

$1.35
Price Per Gallon
Above US Average
(Central Sierra Region)

California average Residential Price for the 12 months ended April 2021 was 21.03 cents/kWh, 65.2% higher than the US average of 12.73 cents/kWh for all states other than California. California’s residential prices remained the 6th highest in the nation.

For the 12 months ended April 2021, the average annual Residential electricity bill in California was $1459, or 46.8% higher ($465) than the comparable bill in 2010 (the year the AB 32 implementation began with the Early Action items). In this same period, the average US (less CA) electricity bill for all the other states grew only 5.9% ($80). The average bill in California rose to the 19th highest in the nation. Since 2010, the cost of electricity to California households has far outpaced the other states, with these costs dropping in 10 states and unchanged in another over the 11-year period. 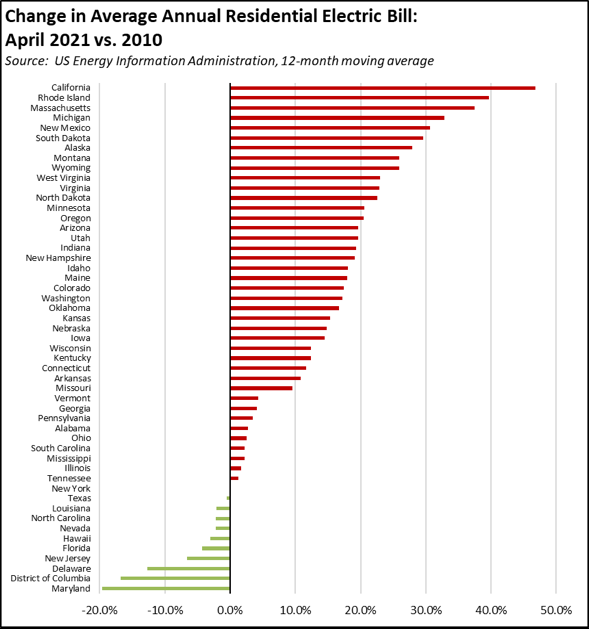 $8.0b
Premium Above
US Average Price

For the 12 months ended April 2021, California’s higher electricity prices translated into Residential ratepayers paying $8.0 billion more than the average ratepayers elsewhere in the US using the same amount of energy.

California average Commercial Price for the 12 months ended April 2021 was 18.36 cents/kWh, 79.6% higher than the US average of 10.22 cents/kWh for all states other than California. California’s commercial prices were the 3rd highest in the nation and the highest among the contiguous states.

California average Industrial Price for the 12 months ended April 2021 was 14.78 cents/kWh, 128.4% higher than the US average of 6.47 cents/kWh for all states other than California. California’s industrial prices were the 4th highest in the nation. Among the contiguous states, only Rhode Island was higher.

$12.2b
Premium Above
US Average Price

Average prices ($ per thousand cubic feet) for the 12 months ended April 2021 and changes from the previous 12-month period for each end user: