Below are the monthly updates from the most current September 2020 fuel price data (GasBuddy.com) and July 2020 electricity and natural gas price data (US Energy Information Agency). The information incorporates EIA revisions to the natural gas data beginning with January 2017. To view additional data and analysis related to the California economy visit our website at www.centerforjobs.org/ca.

The most recent data again shows a sustained rise in California energy costs compared to the rest of the nation, with the state passing two key mileposts. Residential electricity prices rose to the 6th highest in the nation, and industrial prices to the 4th highest. Commercial prices remained at the 3rd highest.

As detailed in last month’s report, California’s energy policies now cost the state’s households and employers more than $44 billion a year compared to the average prices paid by the rest of the US. And this amount is far larger when compared to the ability of the state to provide reliable and less costly energy in the past. These growing cost gaps are generally the outcome of the state’s climate change regulations, but they are not the price of addressing the challenges of climate change. They are the result of the way the state has chosen to do so, relying on a constantly expanding range of regulations regardless of the cost to Californians and to California jobs.

The state has achieved climate change emission reductions through its regulatory approach, but at a pace that differs little from the rest of the nation and that in some cases even lags what other states have been able to achieve at far lower cost.

In the most recent data from the US Energy Information Administration, California ranked only 12th in the share of in-state electricity generation coming from non-CO2 sources. That year was an improvement from 14th in 2018, but passing Tennessee and Iowa in the rankings was made possible only by a nearly 6 percentage point increase in the share coming from conventional hydroelectric generation—the result of favorable weather not the state’s regulations. In-state wind and solar generation in fact declined marginally as a share of the total, illustrating again the degree to which the state’s progress relies on investment decisions made in the past primarily from reliability and cost considerations rather than the politically-driven choice of technology since the state’s climate change actions began in 2010.

At 42.1 TWh, California’s in-state generation from wind and solar remained a distant second behind Texas at 88.0 TWh. As a share of total generation, California at only 8th highest ranked somewhat ahead of Texas at 13th, but this direct comparison does not take into account Texas’ major role as a regional refinery center and the component of its in-state energy use that applies to end uses in the surrounding states. In terms of energy use, California is in the opposite situation of being a “taker” rather than a “giver.”

The continued rise in energy prices especially industrial and commercial also means in some instances, progress in the state’s regulatory approach is not so much from reducing emissions as exporting them as an increasing share of energy intensive processes become uneconomic in the state. On a broader scale, the degree of this trend can be illustrated by the overall shift of energy-intensive production from developed to emerging economies, as shown in the following chart taken from JP Morgan’s Tenth Annual Energy Paper (June 2020): 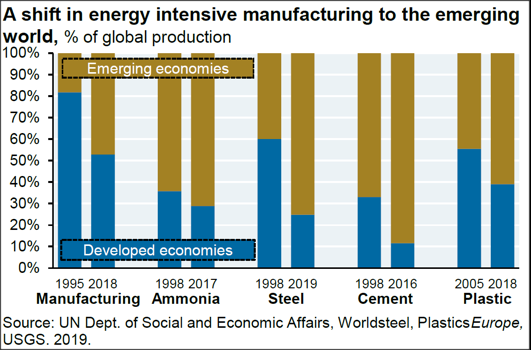 In these cases, emissions are not reduced. The products and services are still used in the state, and related emissions in fact may rise as production is done from energy generated from coal and as emissions are generated from additionally required shipping. By overlooking the basic reliability and cost considerations related to the climate change program specifics, California’s efforts in these instances work at cross purposes as the in-state disincentives grow.

The growing energy cost burdens have contributed heavily to the rapidly rising costs of living in the state in recent years. In the current economic crisis conditions, they now represent an additional barrier in this state created by the state as employers face decisions on when and how and more critically whether and where to reopen. For households with fewer relocation options available especially the lower wage workers hit hardest by this crisis, the state’s current regulatory path means the struggle to regain income instability is not just to return to a previous norm, but a recovery path where the basic costs of living keep rising every month.

California vs. US Fuel Price Gap at 52.9% Premium

The September average price per gallon of regular gasoline in California rose 1 cent from August to $3.23. The California premium above the average for the US other than California ($2.11) rose to $1.12, a 52.9% difference.

In September, California had the 2nd highest gasoline price among the states and DC, behind only Hawaii. Californians paid $1.38 a gallon more than consumers in Mississippi, the state with the lowest price.

$1.02
Price Per Gallon
Above US Average
(CA Average)

The September average price per gallon of diesel in California eased 1 cent from August to $3.36. The California premium above the average for the US other than California ($2.34) rose to $1.02, a 43.6% difference.

In September, California had the 2nd highest diesel price among the states and DC, behind only Hawaii.

$1.26
Price per Gallon
Above US Average
(Central Sierra Region)

California average Residential Price for the 12 months ended July 2020 was 19.64 cents/kWh, 55.5% higher than the US average of 12.63 cents/kWh for all states other than California. California’s residential prices rose to the 6th highest in the nation.

$6.3b
Premium Above
US Average Price

For the 12 months ended July 2020, California’s higher electricity prices translated into Residential ratepayers paying $6.3 billion more than the average ratepayers elsewhere in the US using the same amount of energy.

California average Commercial Price for the 12 months ended July 2020 was 17.30 cents/kWh, 72.5% higher than the US average of 10.03 cents/kWh for all states other than California. California’s commercial prices remained the 3rd highest in the nation.

California average Industrial Price for the 12 months ended July 2020 was 14.06 cents/kWh, 121.8% higher than the US average of 6.34 cents/kWh for all states other than California. California’s industrial prices rose to the 4th highest in the nation.

For the 12 months ended July 2020, California’s higher electricity prices translated into Commercial & Industrial ratepayers paying $11.6 billion more than ratepayers elsewhere in the US using the same amount of energy.

Average prices ($ per thousand cubic feet) for the 12 months ended July 2020 and changes from the previous 12-month period for each end user: