The Labor Force data for April 2016 (seasonally adjusted; California preliminary) is shown below, along with the change from the prior month:

The related not seasonally adjusted numbers (California preliminary), with the change from April 2015:

Total US employment saw a seasonally adjusted drop of 316,000, while the number of unemployed decreased by 46,000. The US unemployment rate held at 5.0%.

Between April 2015 and April 2016, Bureau of Labor Statistics (BLS) data shows the total number of employed in California increased by 355,079 (seasonally adjusted), or 14.2% of the total net employment gains in this period for the US. Measured by percentage change in employment over the year, California was 24th highest. Adjusted for population, California ranked 25th. While California remains the leading state when measured by total change in employment, the recent data revisions continue to show a marked drop when ranked by percentage change or change relative to population.

California’s participation rate (seasonally adjusted) remained unchanged from March 2016 at 62.0%. The comparable US rate dropped 0.2% to 62.8%.

EDD reported that between March and April 2016, seasonally adjusted nonfarm payroll jobs increased by 32,400. The March job gains were revised upwards to 5,200 from the preliminary estimate of 4,200.

Looking at the not seasonally adjusted numbers, hiring saw increases in all but 3 industries. The change in total payroll jobs from March 2016 saw the largest increases in Farm (56,000) as seasonal hiring increased, Accommodation & Food Services (17,800), and Construction (16,500). Declines were in Information (-500), Healthcare & Social Services (-1,900), and its sub-industry Individual & Family Services (-5,000).

By total number of new jobs, California had the highest increase in seasonally adjusted nonfarm jobs among the states from April 2014 to April 2015, at 450,200 or 16.7% of the US net increase. By percentage growth in jobs, California was 10th highest, and by population adjusted jobs growth, 12th highest.

8 Counties in Double-Digit Unemployment, 19 are 5% or Less 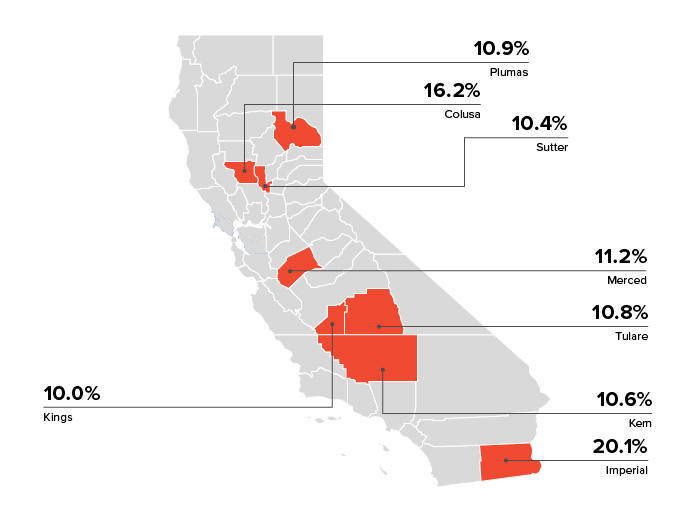 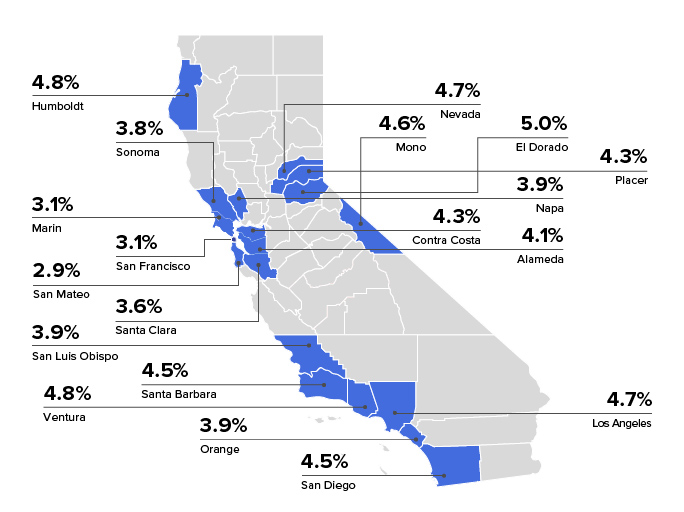 Unemployment rates (all data is not seasonally adjusted) continue to vary widely across the state, ranging from 3.8% in the Bay Area to more than double at 9.8% in the Central Valley.

As measured by the consumer price index (CPI-U, all urban consumers, not seasonally adjusted), the cost of living has been rising faster in California over the past year than in the US as whole. The chart below compares the two rates, measured as the running 12 month percentage change. 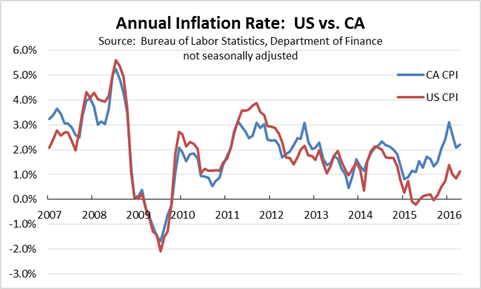 The higher costs in California have been led by fuel & utilities, apparel, medical care, recreation, shelter (rent and homeowners’ rent equivalent), and food & beverages. Changes below the US average have been experienced in other goods & services, transportation, and education & communications.

The California CPI is not directly measured by the US Bureau of Labor Statistics. Instead, it is a composite measure formed by combining the data for Los Angeles-Riverside-Orange County and San Francisco-Oakland-San Jose MSAs using a formula developed by California Department of Industrial Relations.

The Data Tool now has the 2015 Q3 updates for employment and wages by industry for the state, counties, and regions.