The Labor Force data for April 2017 (seasonally adjusted; California preliminary) is shown below, along with the change from the prior month:

The related not seasonally adjusted numbers (California preliminary), with the change from April 2016:

California Employment Development Department’s (EDD) latest release shows on a seasonally adjusted basis, total employment rose 27,800 from March, while the number of unemployed dropped by 20,200. The labor force grew by only 7,600.

California’s seasonally adjusted unemployment rate continued easing to 4.8%. California tied with West Virginia for the 14th highest unemployment rate among the states. The unadjusted rate dropped from 5.4% in April 2016 to 4.5%.

Total US employment saw a seasonally adjusted increase of 156,000 from March, while the number of unemployed dropped by 146,000. The national unemployment rate continued easing 0.1 point to 4.4%. The national labor force numbers also remained essentially level with a gain of only 12,000.

California’s participation rate (seasonally adjusted) remained unchanged in April at 62.1%, while the US rate notched down 0.1 point to 62.9%. The California participation rate still remains near the previous lows from 1976, and well below the average pre-recession level of 65.6% in 2007.

Compared to November 2016, growing business and consumer confidence has seen the national labor force grow by 757,000 and the participation rate by 0.3 percentage point as workers have been drawn back into the labor force. In California, the labor force has remained essentially unchanged (net decline of 13,700), while the rate has dropped 0.2 points.

Between April 2016 and April 2017, Bureau of Labor Statistics (BLS) data shows the total number of employed in California increased by 272,600 (seasonally adjusted), or 12.8% of the total net employment gains in this period for the US. California remained in 2nd place behind Florida (which has a civilian working age population only 55% as large as California’s) at 390,000, with Texas in a close third at 266,500. Measured by percentage change in employment over the year, California dropped to 30th highest. Adjusted for population, California dropped to 30th as well.

EDD reported that between March and April 2017, seasonally adjusted nonfarm wage and salary jobs dropped 16,300 in April. March’s gains were revised up to 22,800 from the previously reported gain of 19,300.

Looking at the not seasonally adjusted numbers, hiring saw increases in all but four industries over the year. The change in total payroll jobs from April 2016 saw the largest increases in Government (51,400) as tax and fee revenues have continued to expand, Construction (31,800), and Food Services (34,400). Declines were in Manufacturing (-10,000), Information (-5,100), and Administrative, Support & Waste Services (-2,300).

In the recent May Budget Revision, the Governor again pointed to the increasing share of lower wage jobs as one of the prime causes of slowing state revenues growth: “The level of wages has been revised downward, and cash receipts have been significantly below forecast.” The following chart illustrates this trend, according to the industry wage classification used previously in other Center analyses of this issue. In the chart below, Private sector jobs are shown in the dark green bands, while Government is shown in the lighter. As indicated, over one-third of jobs growth over the past 12 months has been in the low-wage industries. 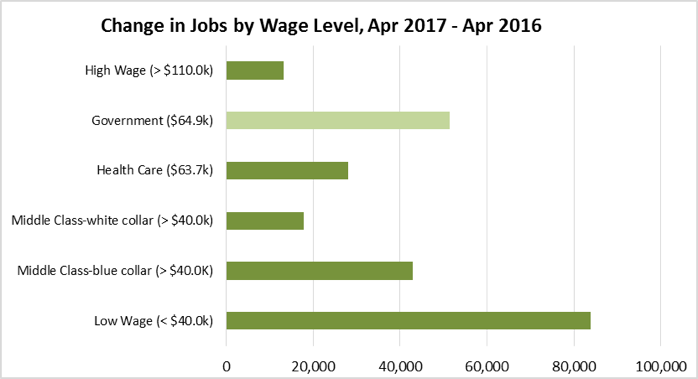 Jobs, wage, and establishment data from Quarterly Census of Employment & Wages (QCEW) has been updated and available through the Employment Data Tool. The most recent data covers 2016:Q2. The update also includes revisions to the earlier year data for the Legislative Districts.

Changes in jobs by wage level for the year 2015:Q2 to 2016:Q2 are summarized in the charts below for Congressional, Senate, and Assembly Districts. The wage categories are similar to those presented above for the state, but some differences exist due to the current availability of data at the legislative district level. The main difference is that Health Care and the lower wage Social Assistance jobs are reported together in the data. Compared to the state data above, the charts below therefore undercount the extent to which “lower wage” jobs affect the mix in each district

As with prior QCEW updates at the district level, the data continues to show sharp disparities among the districts:

Moreover, job gains in these 12 districts were led by the higher wage industries.  The other 161 districts with considerably lower job growth generally saw their numbers dependent to a greater extent on lower wage job growth.

Combining these results with the continuing Two-Tier developments discussed in the next section again reinforces the conclusion that current state policies affecting the state’s business climate primarily generate growth in a few areas of the state rather than providing more widespread job and wage growth across California. 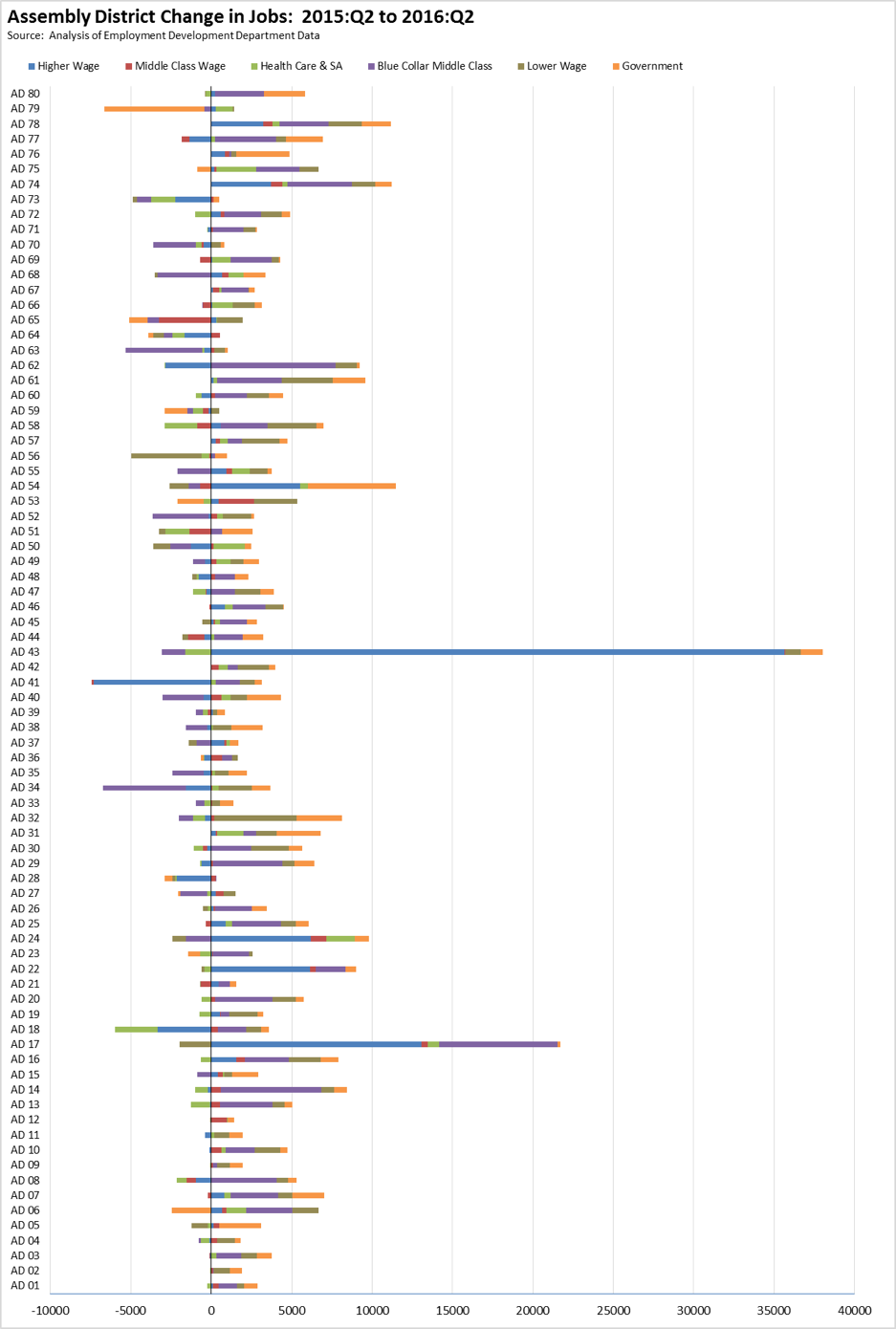 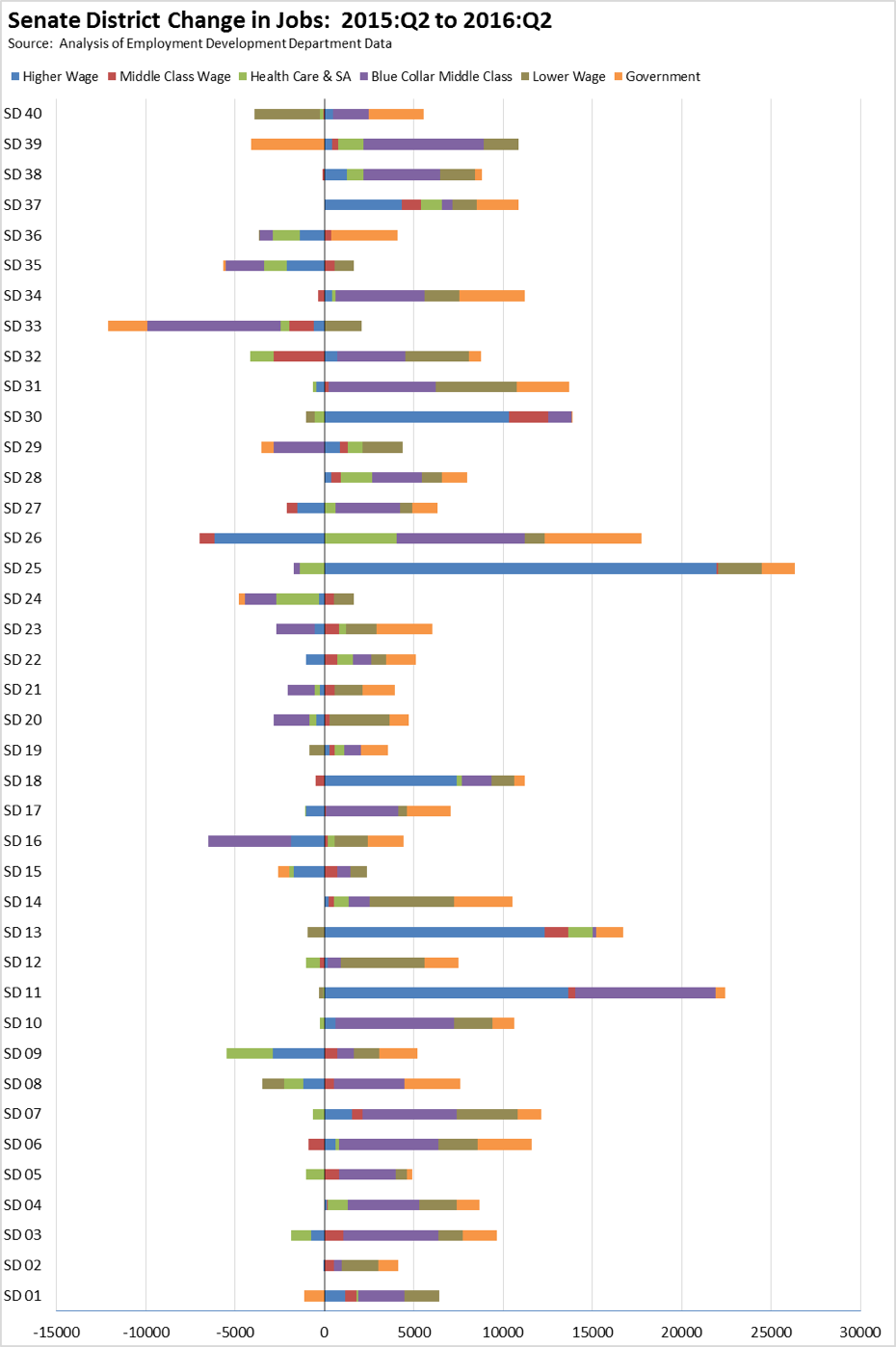 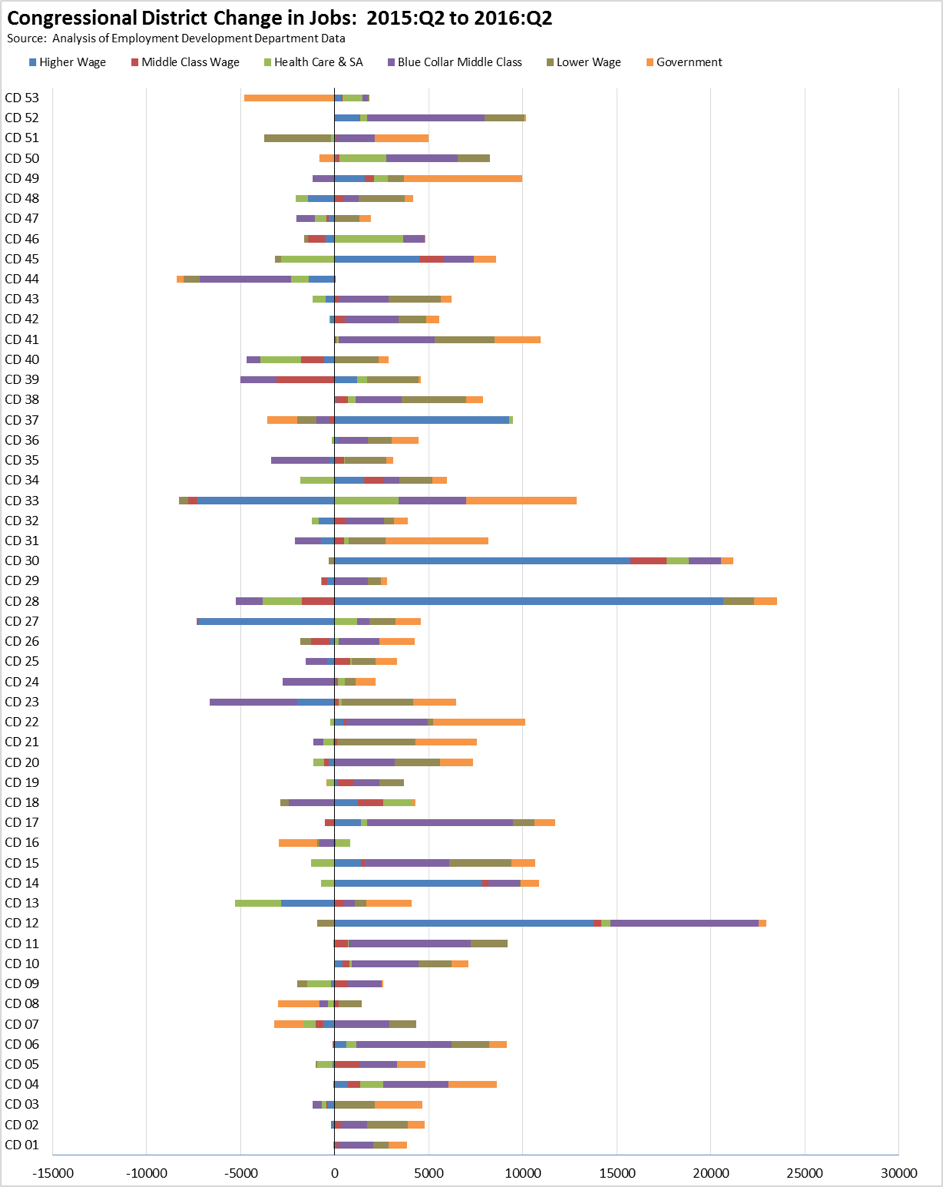 Unemployment rates (all data is not seasonally adjusted) continue to vary widely across the state, ranging from 3.2% in the Bay Area to nearly three times as large at 8.8% in the Central Valley.

Containing just under 20% of the state’s population, the Bay Area was responsible for 42.1% of the net growth in employment since the pre-recession peak in 2007. Los Angeles Region provided the next largest share at 21.2%, but spread over 29.3% of the population. Inland Empire is the only other region where employment growth has exceeded population. 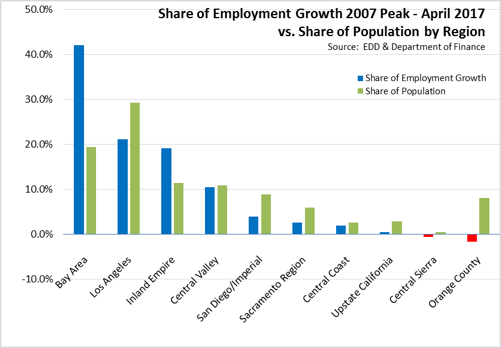