The Labor Force data for August 2016 (seasonally adjusted; California preliminary) is shown below, along with the change from the prior month:

The related not seasonally adjusted numbers (California preliminary), with the change from August 2015:

California Employment Development Department’s (EDD) latest release shows on a seasonally adjusted basis, total employment grew by 57,300 from July, while the number of unemployed grew by 12,000.  California’s seasonally adjusted unemployment rate remained steady from the prior month at 5.5%.  California tied with Illinois and Wyoming for the 13th highest unemployment rate among the states.  The unadjusted rate remained unchanged from August 2015 at 6.1%.

Total US employment saw a seasonally adjusted increase of 97,000 from July, while the number of unemployed increased by 79,000.  The national unemployment rate remained level at 4.9%.

California’s participation rate (seasonally adjusted) rose 0.1 point to 62.2% in August.  The comparable US rate remained level at 62.8%.  While the participation rate has been showing its first improvement in a year, the overall rate still remains near the previous lows from 1976, and well below the average pre-recession level of 65.6% in 2007.

Between August 2015 and August 2016, Bureau of Labor Statistics (BLS) data shows the total number of employed in California increased by 354,472 (seasonally adjusted), or 13.8% of the total net employment gains in this period for the US.  Measured by percentage change in employment over the year, California was 18th highest.  Adjusted for population, California ranked 19th.

EDD reported that between July and August 2016, seasonally adjusted nonfarm payroll jobs increased by 63,100.  July’s gains were revised downwards by nearly half to 18,600 from the previously reported gain of 36,400.

Looking at the not seasonally adjusted numbers, hiring saw increases in all but 2 industries.  The change in total payroll jobs from August 2015 saw the largest increases in Health Care & Social Services (61,800), Professional, Scientific & Professional Services (56,200), and Government (43,400).  Declines were in Manufacturing (-10,700) and Mining & Logging (-3,300).

By total number of new jobs, California had the highest increase in seasonally adjusted nonfarm jobs among the states from August 2015 to August 2016, at 378,000 or 15.4% of the US net increase.  By percentage growth in jobs, California was 12th highest, and by population adjusted jobs growth, 17th highest.

Unemployment rates (all data is not seasonally adjusted) continue to vary widely across the state, ranging from 4.2% in the Bay Area to more than double at 8.9% in the Central Valley. 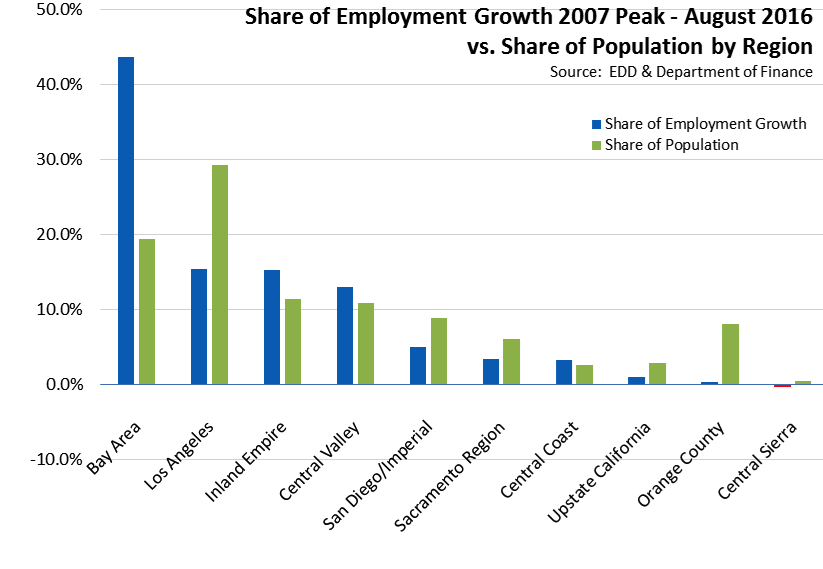 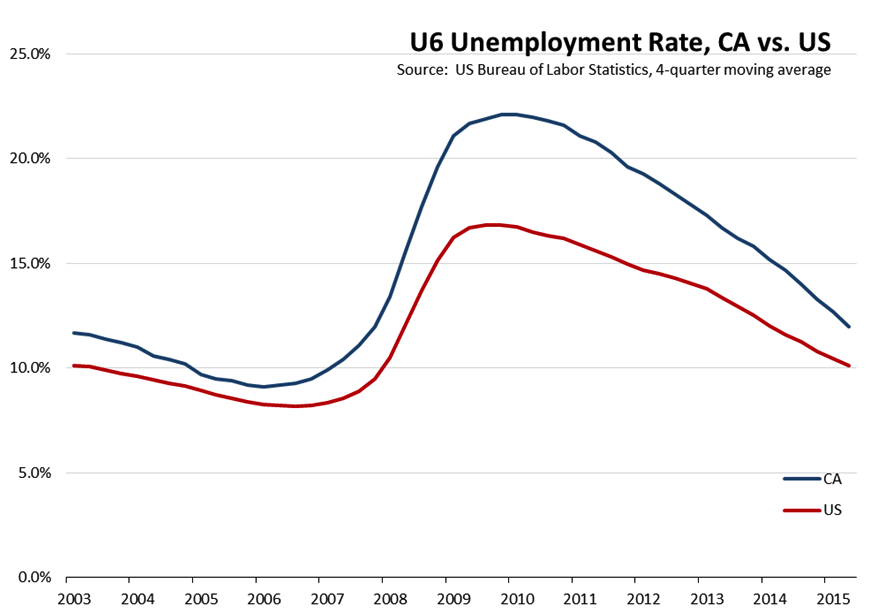 Within California, Animal and Products Production experienced a relatively larger decline of 20.5% in value (drop of $3.1 billion).  Crop Production was off 13.3%, but with a larger dollar decline of $5.3 billion.  The contribution of other Farm-Related Income remained essentially level, with an increase of 0.9%.

The chart below compares the real value ($2009) of farm production for the US and California, calculated as the change from 1990.  The chart shows that California has managed to outpace growth for the US as a whole in most years, including the most recent drought years and the extended drought in the early 1990s.  This growth has come as California agriculture has shifted to higher-value, often permanent crops such as grapes, nuts, and fruits and increased total farm-gate income through value-added innovations.  These shifts, however, have made the industry more dependent on reliability in many production inputs, in particular water, labor, and access to markets.

The sharp drop in 2015 reflects the accumulation of a number of factors, including continued drought, increasing costs of alternative water supplies, softness in traditional export markets, and increasing cost of energy including fuels, electricity, and natural gas.  Recent state decisions such as those related to water and labor wage regulations come against this backdrop of a steep shift in the direction of the industry’s growth. 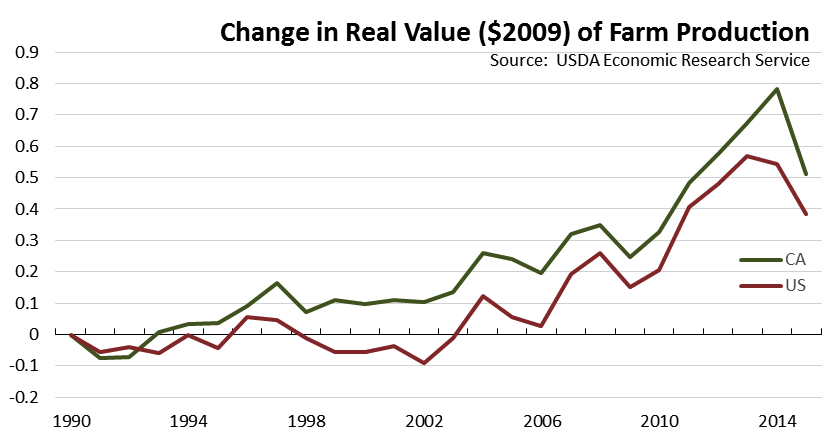