EDD reported total employment (seasonally adjusted; August preliminary) was up 5,400 from the revised July numbers, while the number of unemployed dropped by 13,200.  Unemployment rate was unchanged 4.1%.  The unadjusted rate was down 0.1 point from the year earlier to 4.2%.  California had the 12th highest unemployment rate among the states. 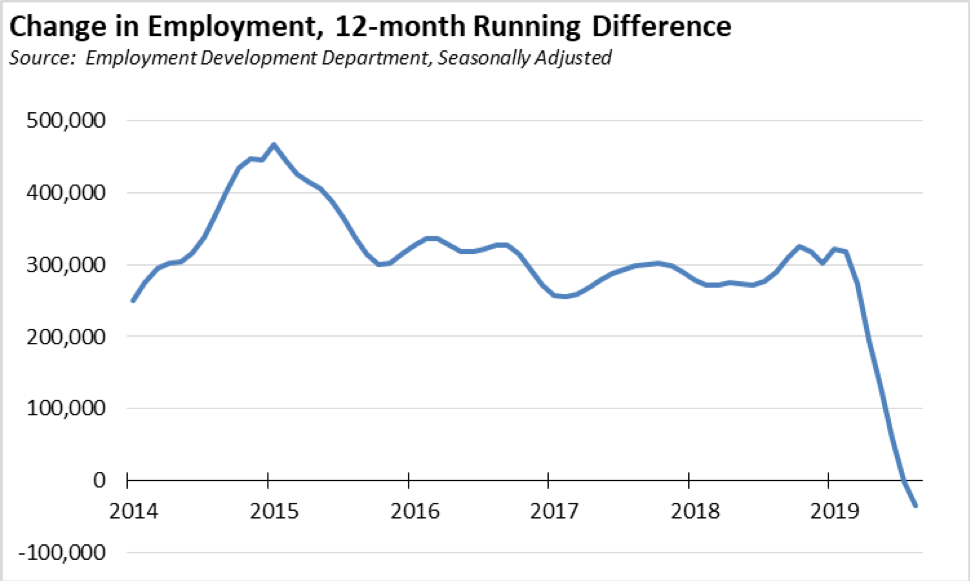 However, August was the second month in a row showing a year-over-year drop in employment.  Viewed on this basis, after holding steady around a gain of about 300,000 since the second half of 2015, employment growth has been steadily declining since October 2018 and essentially stalled with a loss of 100 in July.  In August, the employment level was 34,500 below the previous mark in August 2018.  These numbers are based on the seasonally adjusted data, but the unadjusted data also shows a similar pattern as well.

While California continues to create jobs, the employment numbers illustrate starkly the increasing difficulty of filling them.  Unlike conditions elsewhere in the US, workers in California are not being drawn back into the workforce, and remain on the sidelines of the continuing recovery at a higher rate.

Nationally, total US employment saw a seasonally adjusted gain of 590,000 for the month, with the number of unemployed dipping 19,000 as the national labor force continued to expand.  The unemployment rate remained stable at 3.7%.

The continuing stall out in labor force growth has significant implications for the California economy. The increasing difficulty of finding qualified workers, and in some cases any workers, puts California businesses at a competitive disadvantage to other states where the expansion continues to draw workers into the labor force. At the same time, this situation produces caseload demands on state and local welfare and other social assistance budgets well above where they should be given the current circumstances of the recovery. 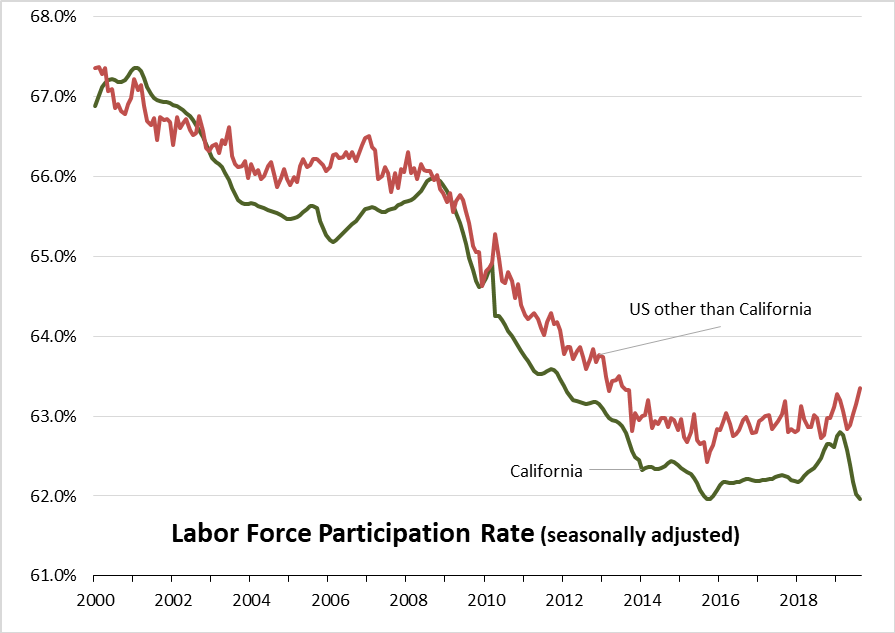 As indicated above, California’s employment shrank 34,500 when measured year-over-year.  By this measure, California plummeted to 50th place among the states, ahead of only New York which showed a loss of 61,100.  Texas led with an additional 216,400 persons employed over this period, and Florida in second place with a gain of 148,400.

Based on percentage growth, California had a 0.2% contraction in employment, below the average for the rest of the US which showed a gain of 1.1%.  Ranked among the states, California’s growth rate dropped to 46th place, while Tennessee again led at 3.4%.

Adjusting for population size, California came in at 14th among the states, with a 12-month jobs growth rate of 1.8%, still ahead of the 1.3% average for the rest of the nation.

In the unadjusted numbers that allow a more detailed look at industry shifts, hiring saw increases in all but 2 industries over the year.

Declines were in Retail Trade ($36.7k) as this portion of the economy continues to go through a structural shift in response to growing wage pressures from government mandates at the same time it is under competitive challenges from nontraditional sources, and Wholesale Trade ($78.3k).

Jobs growth within the traditional middle class wage—especially blue collar industries such as Manufacturing, Mining & Logging, and Utilities—continues to lag.  After stronger gains during the recovery, both Wholesale and Retail Trade have continued to show weakness, reflecting competitive pressures from nontraditional channels at the same time these industries have been weakened by state policies resulting in rising operating costs.  Utilities continues to show weakness as the state’s energy policies result in the replacement of in-state generation with facilities having lower labor needs and with sources in other states.  Finance & Insurance also remains in the negative column as companies have moved back office and other operations out of the state. 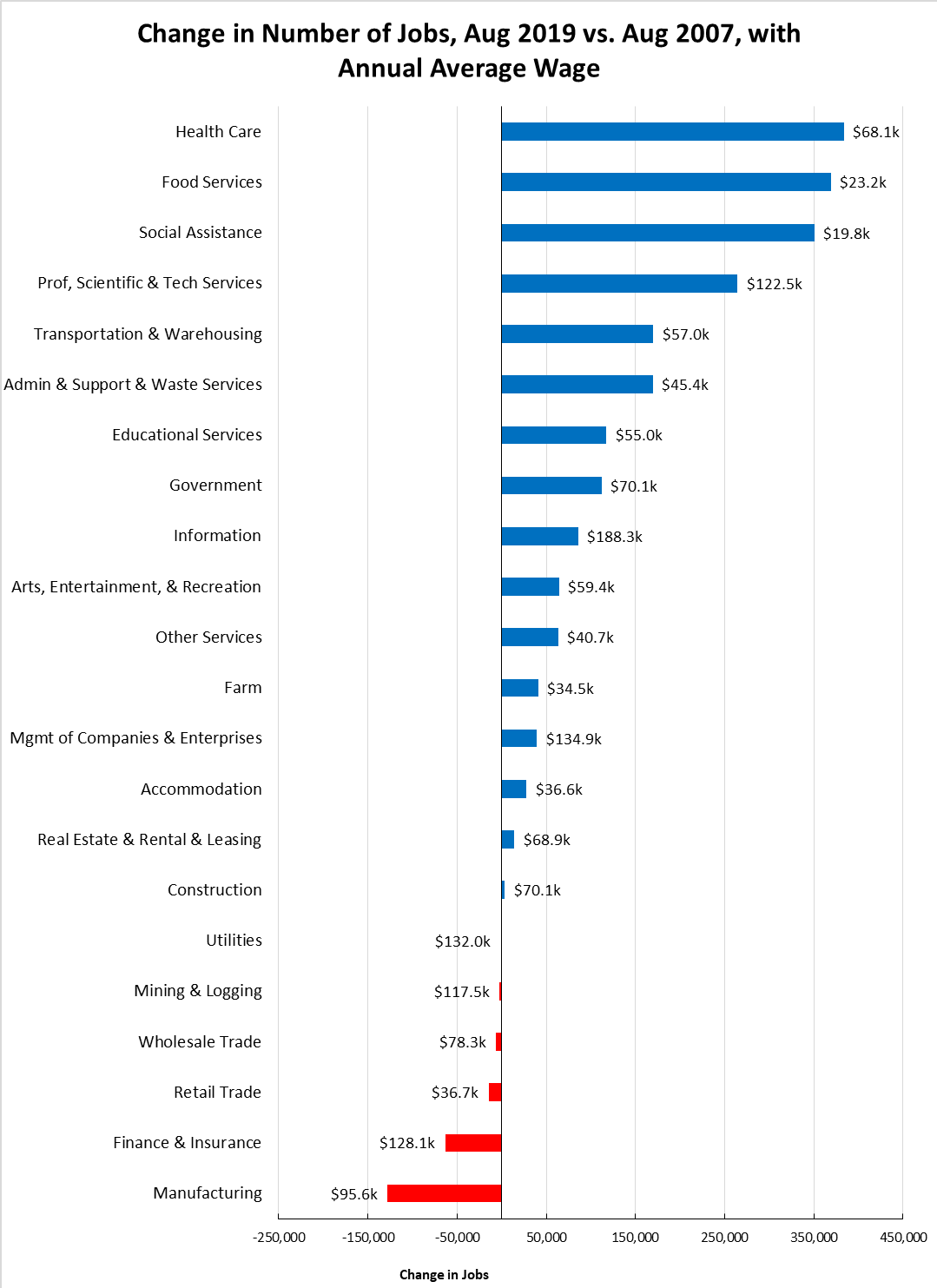 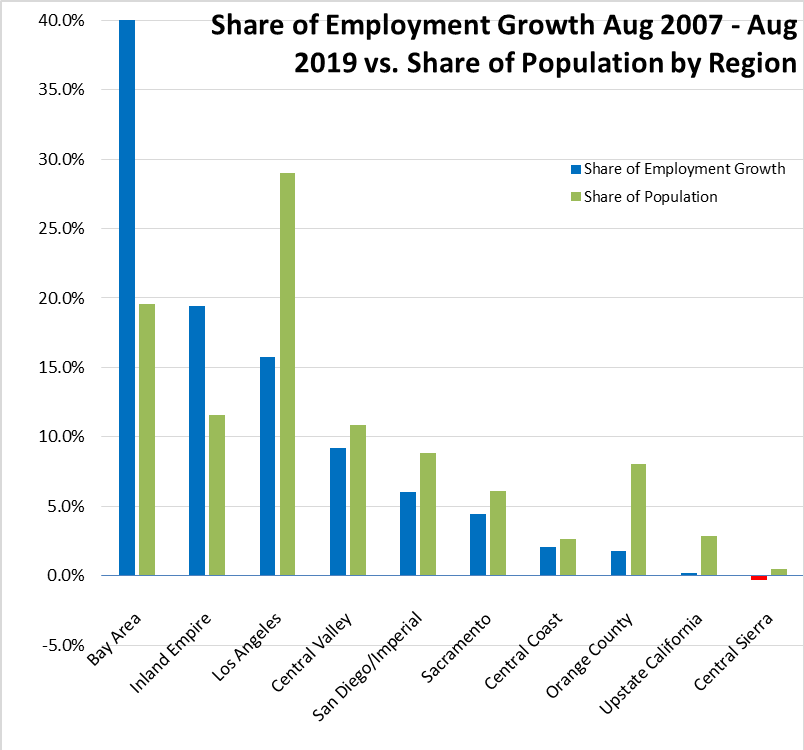 Chart of the Month: Jobs & Wage Growth by Region

The employment growth by region shown above and in these monthly reports describes the individual side of the economy—where more people are finding work and doing this by showing the data in net growth terms.  Where the greatest employment growth has occurred by comparing current levels to those in 2007 before the Great Recession.

The recent release of the revised 2018 Quarterly Census of Employment & Earnings allows the flip side of this equation to be shown—which regions have been creating the most jobs to employ them and at what wage levels. 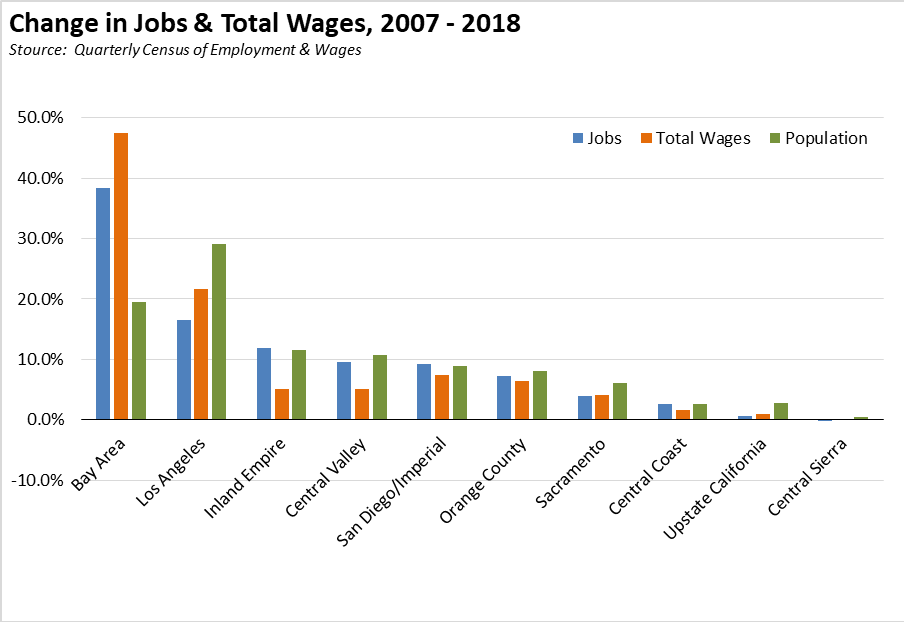 Not surprisingly, the data shows similar results—workers go to where the jobs are.

The distribution of wage growth was even more skewed.  The Bay Area accounted for 47.5%, nearly half, of the growth in total wages and salaries paid, reflecting the jobs growth in this region primarily coming from the much higher pay tech industries.  Los Angeles did better on this score, bringing in 21.6% of total wage and salary growth, reflecting the number of new jobs in some higher pay industries.  Sacramento also did somewhat better, reflecting increasing pay for government workers.