The August change in jobs by wage level showed the greatest change in the middle wage industries due to the heavy concentration coming from local government education. The lower-wage jobs recovery was substantially more shallow as the result of labor shortages combined with increasing concerns over the Delta variant. The higher-wage industries continued to experience the most consistent recovery rate.

In the chart, higher-wage jobs are those industries with average annual wages above $100,000; medium wage is $50,000 to $100,000; and lower wage is below $50,000. Job data is drawn from the industry classifications, unadjusted job numbers, and wage levels generally used in the regular report section below on Nonfarm Jobs. 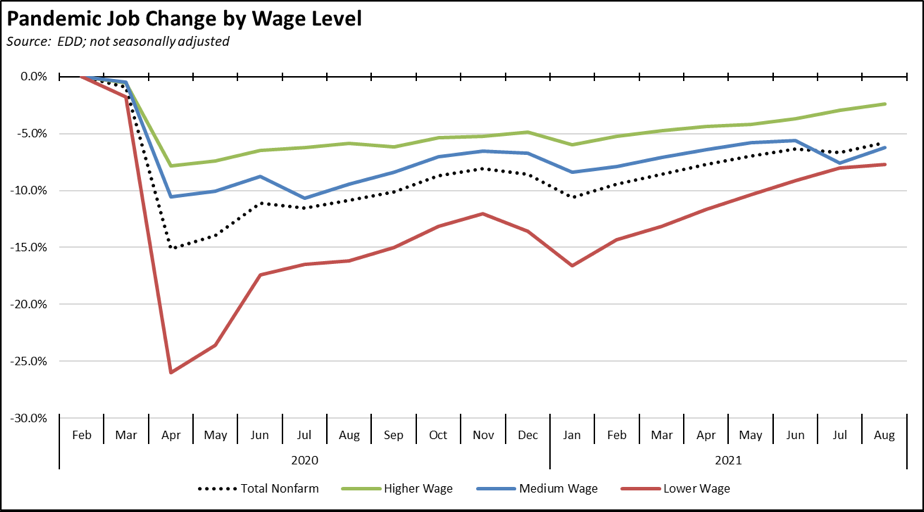 While both the jobs and employment numbers have been better in recent months, they are not yet at levels that would see quick recovery in the state economy. Continuing the rates experienced over the past 3 months would return nonfarm jobs to pre-Covid trend levels in mid-2023. The lagging recovery rate for employment would take an additional year.

In both charts, the pre-Covid trend is taken from the average monthly growth rate between January 2019 and February 2020. The Current Trend lines are calculated using the numbers from the last 3 months. 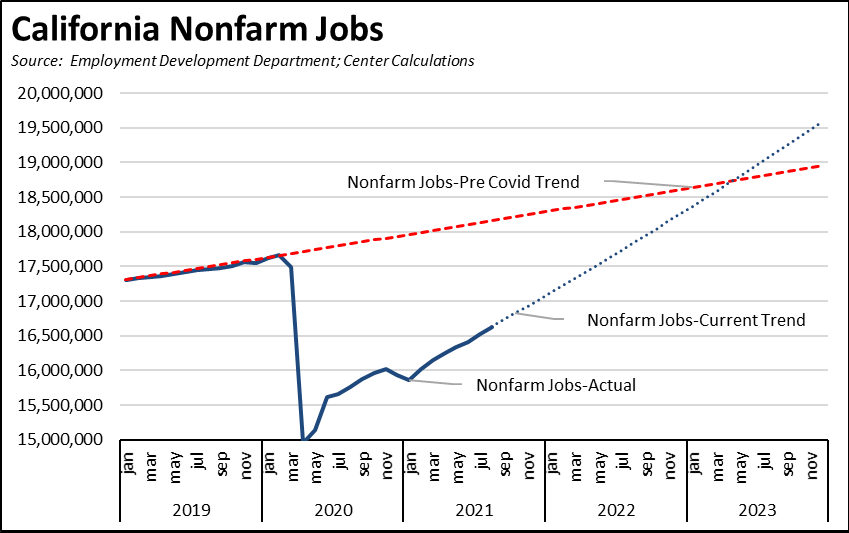 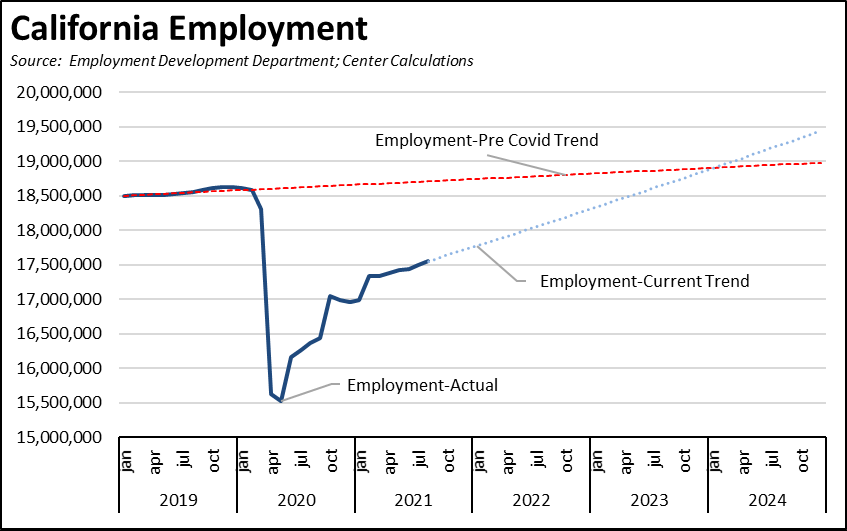 EDD reported that employment (seasonally adjusted; August preliminary) was up 57,500 from the revised July numbers, while the number of unemployed was largely unchanged with a drop of only 2,200. The unadjusted numbers show a loss of 57,300 after a more solid gain of 178,400 in July.

The reported unemployment rate improved 0.1 point to 7.5% due to a 0.3% expansion in the labor force, compared to 4.3% in February 2020 prior to the pandemic. California’s seasonally adjusted unemployment rate was the 2nd highest among the states, exceeding only Nevada.

The national results again were somewhat stronger, with total US employment rising by 509,000, and the number of unemployed dropping by 318,000. The reported unemployment rate improved 0.2 point to 5.2%, compared to 3.5% in February 2020.

The labor force participation rate edged up 0.1 point to 61.0%, while the US number was unchanged at 61.7%. The California rate remains well below the pre-pandemic level of 62.5%, which in turn was down substantially from prior years. Accounting for workers leaving the workforce since February 2020, there were 1.9 million out of work in August.

Nonfarm wage and salary jobs were up 104,300 (seasonally adjusted) in August, while gains in July were revised 1,300 lower. Of the total, 58% was due to government hires, mostly coming from seasonal factors related to schools but also with non-education hires rising due to historically high public revenues. Nonfarm jobs nationally were up 235,000.

Compared to the February 2020 numbers (seasonally adjusted) just prior to the pandemic, nonfarm wage and salary jobs in California were 1.029 million short of recovery, or 19.3% of the national shortfall. California tied with New Mexico and Rhode Island for the 10th lowest rate of jobs recovery.

In the seasonally adjusted numbers, two states—Utah and Idaho—continue to exceed the pre-pandemic levels, moving from recovery to growth.

Using the unadjusted numbers that allow a more detailed look at industry shifts, 5 industries showed job levels at or exceeding the pre-pandemic February 2020 levels. The strongest lags in recovery continue to those lower-wage industries that were hardest hit by the state-ordered closures: Arts, Entertainment & Recreation, Accommodation, Other Services, and Food Services. The relative levels of Government and Educational Services continue to be affected by seasonal factors as schools began reopening in August. 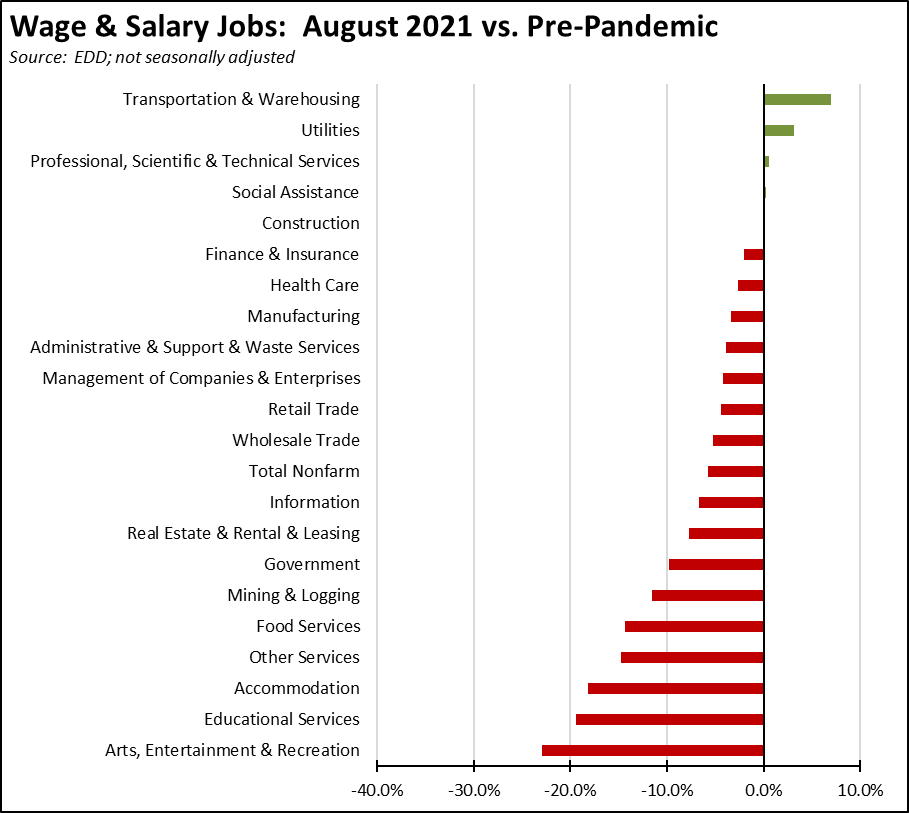 Comparing August employment to pre-pandemic February 2020, Los Angeles Region lagged behind the rest of the state in employment recovery, showing a loss of 8.9% and containing 43% of the total employment shortfall in the state compared to 29% of the total population. 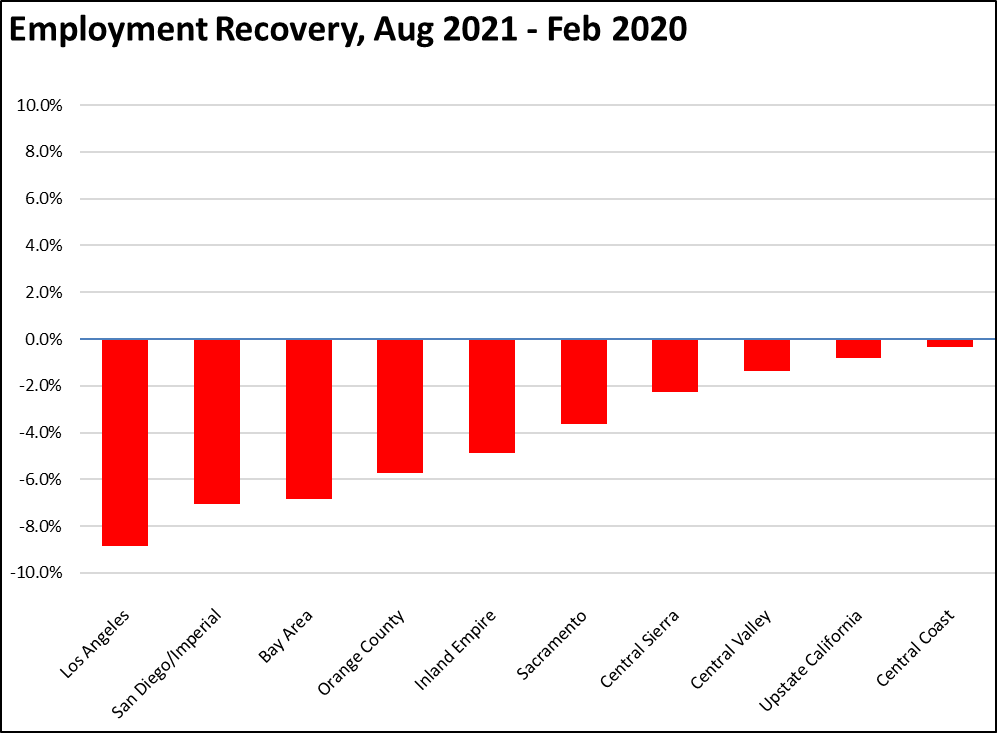 The highest and lowest estimated unemployment rates in August are shown below.

Unemployment rates (not seasonally adjusted) compared to pre-pandemic February 2020 continue to show Los Angeles Region with the worst outcome in the state.

California had 11 of the MSAs among the 25 regions with the worst unemployment rates in July.