The Center for Jobs and the Economy has released our initial analysis of the September Employment Report from the California Employment Development Department. For additional information and data about the California economy visit www.centerforjobs.org/ca.

The September numbers show continued weakening in the state’s recovery progress, with the nonfarm job numbers essentially at a stall and the employment numbers posting a contraction for the second month in a row. The national numbers in contrast posted employment levels above the pre-COVID peak in February 2020 for the first time, while continuing a 3-months long jobs expansion beyond that benchmark. Compared to the February 2020 pre-pandemic peaks, California was still 0.1% short of the recovery mark for nonfarm wage and salary jobs and backslid to 1.0% short for employment. 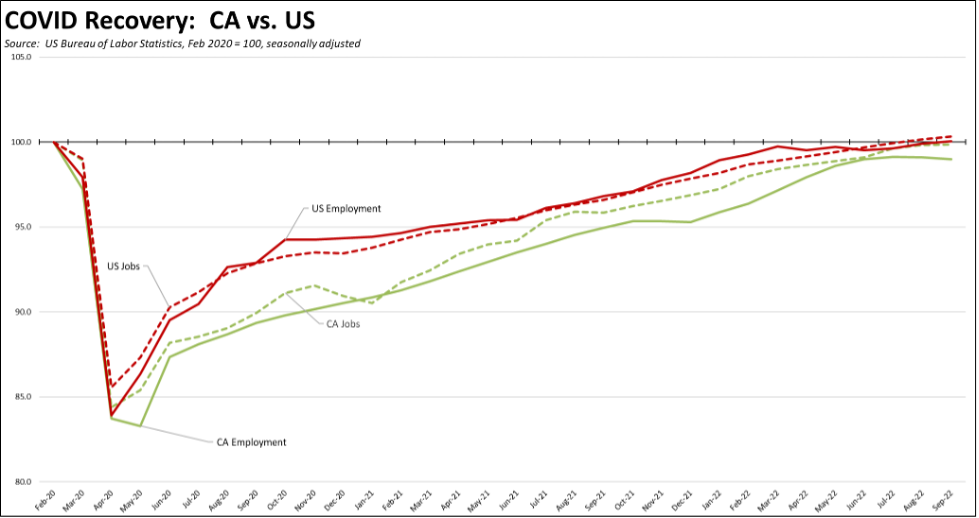 California nonfarm gains were only 6,500, the 14th highest among the states and the lowest monthly gain since the loss posted in September 2021. Nationally, job gains were led by Florida (48,800), Texas (40,000), and North Carolina (17,400). Over the prior 12 months, California (712,600) remained in 2nd place behind Texas (721,800). California’s gains, however, constitute jobs recovery from the series of state-ordered shutdowns. Texas and 22 other states instead are now growing beyond their pre-COVID peaks. 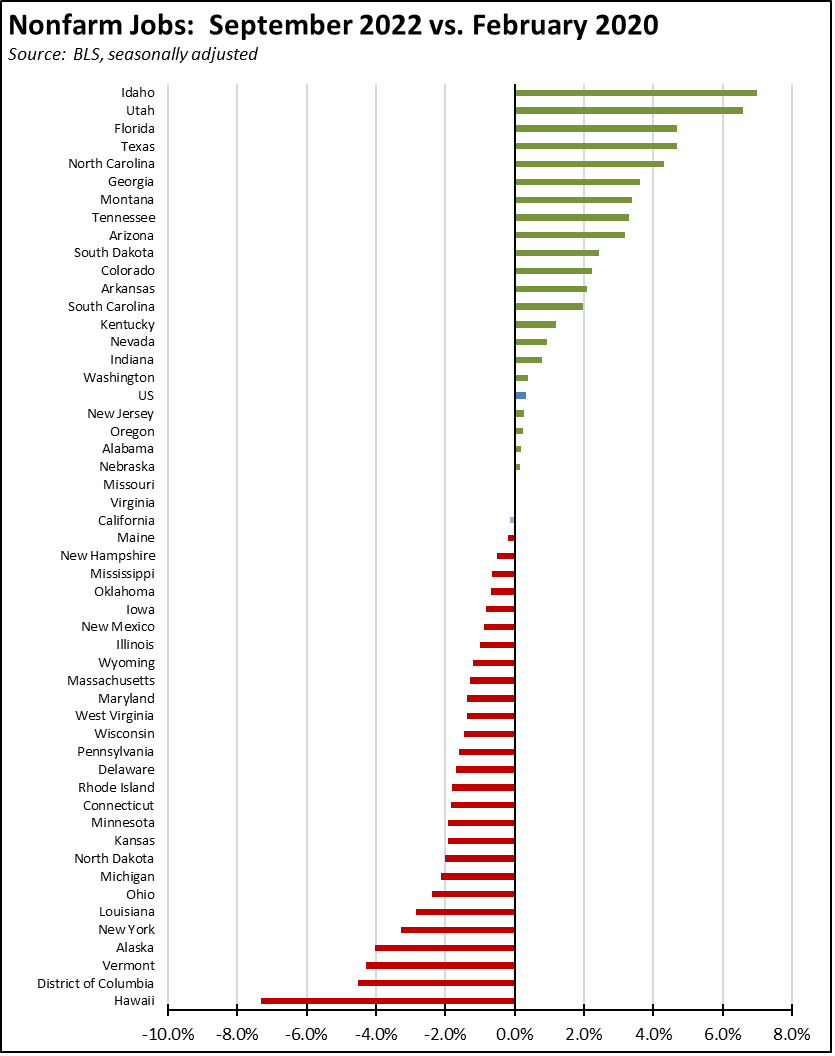 In the employment numbers, California edged down to 35th highest among the states when measured by a return to the pre-pandemic employment peak, while 28 states again had more people working than before the pandemic and providing the workforce essential to expanding jobs. The state’s unemployment rate improved to 3.9%, the 15th highest among the states and DC. Overall, 36 states including California had unemployment rates at or below the February 2020 level. 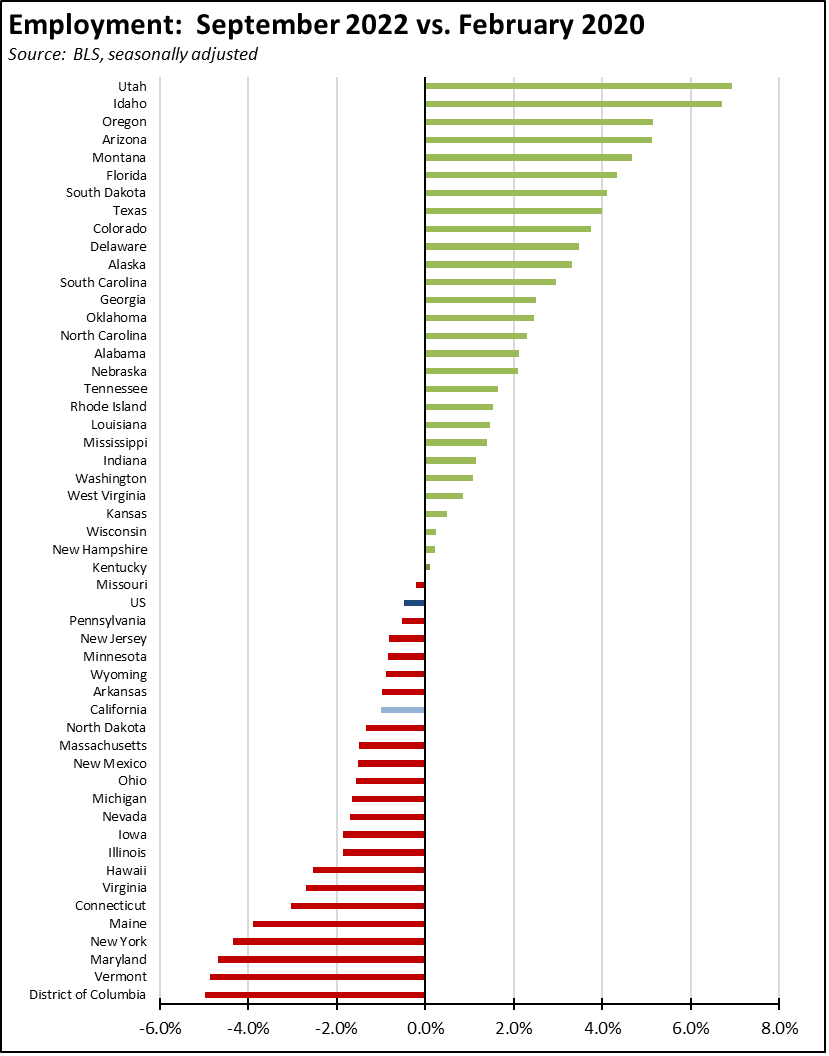 The general economic slowing shown over the past few months in large part reflects the policy choices in the state, emphasizing the expansion of benefits over steps to accelerate jobs recovery capable of moving into jobs expansion. This focus is reflected in the recent budget decisions under SB 951 to increase the 1.1% SDI payroll tax to cover all wages, and the continued failure to manage the state’s growing unemployment insurance debt, a decision that will increase the cost of employing workers both due to rising federal tax rates and continuation of the state rates at their highest possible levels. Rather than accelerating jobs, California continues to impose measures making jobs creation more costly.

But while decisions such as these continue to hinder jobs growth and the expansion of the labor force required to support it, threats of a new recession appear to be growing even before the state manages to fully recover from the last one. The likely effects are already beginning to be seen in the state’s monthly revenue numbers. In the latest results from the Department of Finance for the first quarter of the fiscal year, general fund cash receipts fell $4.8 billion (11.1%) short of the Budget Act projections. Combined with the $2.2 billion shortfall for the 2021-22 fiscal year, the total shortfall in revenues now stands at $7.0 billion. This shortfall is more significant than in other budget years, however, as the Budget Act frontloaded expenditures in the current 5-year planning horizon, anticipating that accumulated reserves would be sufficient to avoid deficits in the latter portion. The looming shortfall undermines this assumption.

The first quarter generally is a somewhat lower revenue period—projected to produce 19% of total revenues in the current fiscal year. The primary source of the shortage, however, has been personal income tax (PIT) receipts. Overall, PIT is off 16.1% from projections in the first quarter, with withholding (the wage and salary component) off 10.2%. Estimated payments—the primary conduit for the critical capital gains that determine whether the budget will be in surplus or deficit—are off by 41.0%, a much higher shortfall reflecting the stock market’s performance and the near-collapse of IPOs in the Bay Area tech industry. The high-income taxpayer component—Mental Health Services Act 1% tax on incomes over $1 million—is off 16.3%, reflecting both the sharp decrease in capital gains as well as likely the continued movement of at least some of these taxpayers out of the state.

The other primary economic indicator—sales and use taxes—is off by only 3.3%, but this result likely is more a temporary outcome reflecting consumer spending that has been maintained by the high level of household savings generated from the pandemic-period assistance payments. The “economic stress” indicators—alcohol and tobacco taxes—instead are showing modest gains.

The number of initial claims (4-week moving average) have been rising in California along with the rest of the US, although in both cases still falling below the pre-pandemic 2019 average. For the past 4 weeks ending with the week of October 15, California initial claims again were 21% of the national total, while insured unemployment (a proxy for continuing claims) in the 4 weeks through the week of October 8 edged up to 24% of the total. 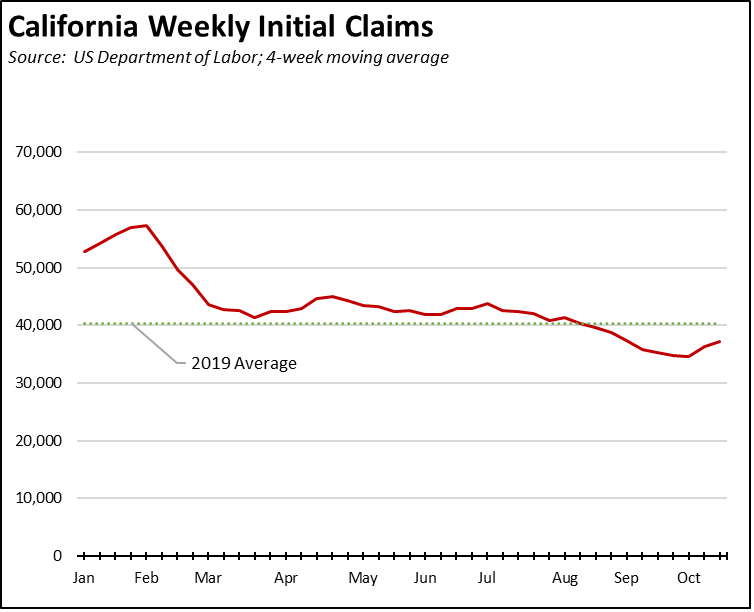 Even with the prospects of another economic downturn rising, California’s primary fund to assist unemployed workers remains fully unprepared. While most other states have paid off their federal debt and restored the health of their state funds, California remains one of the few remaining states relying on debt to support its unemployment insurance program rather than using its federal pandemic recovery funds—as explicitly authorized in the appropriations—for this purpose. 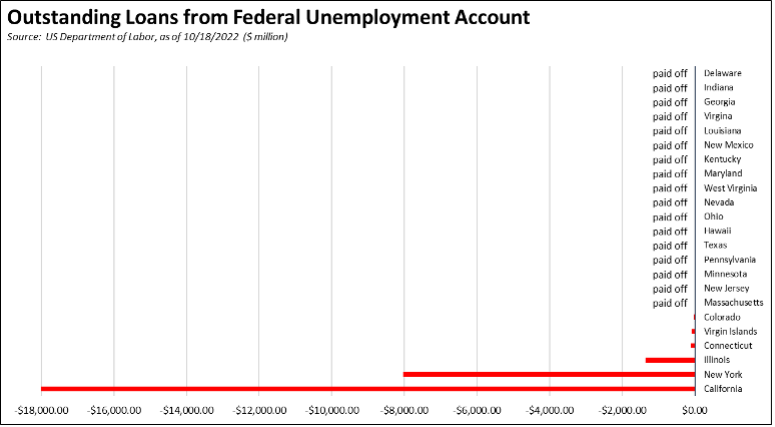 Management issues also remain as evidenced by the level of fraud able to take place in California during the pandemic. The most recent estimates of fraud nationally by the US Department of Labor Inspector General pegs the total at $43.6 billion through April 2022. The most recent estimate for California alone was $20 billion earlier this year but previously ranged from $11 billion to $31 billion. The result is that California was responsible for about half of the fraud that diverted these resources during the pandemic.

California’s reported unemployment rate (seasonally adjusted) in September dropped 0.2 point to 3.9%, the lowest rate in the current data series. This improvement, however, came substantially as the result of a sharp drop in the labor force. While statistically an improvement, the 3.9% outcome instead reflects the continuing shortage of workers holding back the state’s recovery and subsequent potential for growth.

The reported national numbers show the US unemployment rate (seasonally adjusted) also dropped 0.2 point to 3.5% as the labor force was largely unchanged with a drop of 57,000. Employment was up by 204,000, and unemployment down by 261,000.

Nonfarm wage and salary jobs were up only 6,500, the lowest month since the loss posted in September 2021.

Nonfarm jobs nationally were up 235,000, posting the third month in a row above of the pre-pandemic peak in February 2020.

The September numbers kept California at regaining 99% of the nonfarm jobs shuttered in the state shutdowns, while the US as a whole was 2% above. The seasonally adjusted numbers for California showed gains in 9 industries and losses in the other 9, with the increases led by Educational Services (8,200), Accommodation & Food Services (7,900), and Health Care & Social Assistance (6,800). Losses were led by Government (-16,100), Retail Trade (-4,200), and Management of Companies & Enterprises (-1,400).

California unfilled job openings at the end of August dropped 106,000 (8.4%) to 1.163 million as hiring plans were revised likely due to a combination of the changing economic conditions and continuing labor shortages. Nationally, job openings were down somewhat more, showing a drop of 10.0% to 10.1 million. Substantial potential remains for further jobs and economic growth, but the numbers are beginning to recede from their highs at the beginning of the year.

The number of counties with an unemployment rate at 10% or more remained at 1. The unadjusted rates ranged from 1.9% in San Mateo to 16.0% in Imperial.