Unemployment Rate Up Slightly to 5.8%; Total Employment Little Changed at -9,800

The Labor Force data for December 2015 (seasonally adjusted; California preliminary) is shown below, along with the change from the prior month:

The related not seasonally adjusted numbers (California preliminary), with the change from December 2014:

Total US employment saw a seasonally adjusted increase of 485,000, while the number of unemployed decreased marginally by 20,000.

EDD reported that between November and December 2015, seasonally adjusted nonfarm payroll jobs increased by 60,400.  The November job gains were revised upwards slightly to 7,200 from the preliminary estimate of 5,500.

Twelve Counties in Double-Digit Unemployment, 12 are 5% or Less 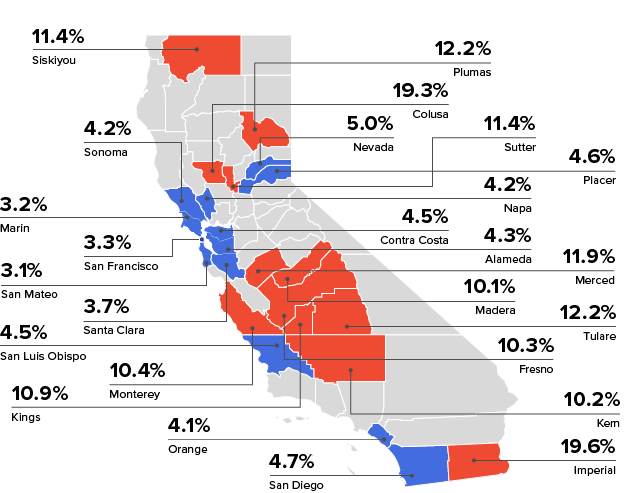 Unemployment rates (all data is not seasonally adjusted) continue to vary widely across the state, ranging from 4.0% in the Bay Area to more than double at 10.2% in the Central Valley.

Ratio of Highest to Lowest Rate: 2.58

Ratio of Highest to Lowest Rate: 6.32 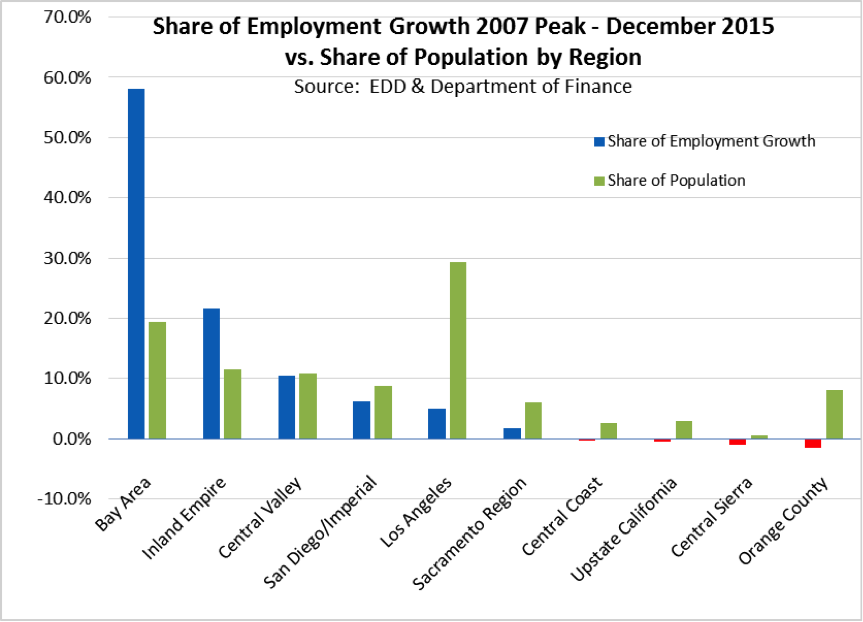 In December, the Census Bureau released the results of the 2012 Survey of Business Owners. This Survey is the only data source providing demographic information on business owners (defined as identifiable persons with a majority ownership share in a business) at the state, county, and city level.

The data is summarized below for the largest demographic groups.  In general:

Growth in the number of Firms without Employees—both the self-employed and firms with nonpaid family workers—was even more dramatic.  Reflecting the overall trend in the state of more persons seeking employment as proprietors rather than traditional wage and salary jobs, all the demographic groups shown except for Whites showed significantly larger growth rates, nearly doubling in the case of Latinos.

Additional information from the Survey will be provided in a summary paper to be posted on the Center’s website.

Labor force (2010-2015) and employment (2014-2015) data revisions will be released by BLS and EDD over the coming months, with the final revisions currently scheduled for April 15.  The Center’s data series will be updated accordingly, although full comparability will not be re-established until the final updates are released in April.  In addition, the various legislative district estimates have been updated in accordance with the 2010-2015 American Community Survey data.  These preliminary revisions will be further updated as the BLS/EDD data is released.

Due to the BLS/EDD updates, there will be no state labor force data released in February, and consequently no Jobs Report in that month.  Instead, the January data is scheduled for March 4 and the February data on March 18.  The corresponding Jobs Reports will be released the following Monday in each case.