The Labor Force data for February 2017 (seasonally adjusted; California preliminary) is shown below, along with the change from the prior month:

The related not seasonally adjusted numbers (California preliminary), with the change from February 2016:

California Employment Development Department’s (EDD) latest release shows on a seasonally adjusted basis, total employment rose 13,800 from January, while the number of unemployed dropped by 22,000. The labor force remained substantially unchanged with a decline of 8,200.

California’s seasonally adjusted unemployment rate continued easing to 5.0% from January’s revised level of 5.2%. California tied with Florida and Pennsylvania for the 15th highest unemployment rate among the states. The unadjusted rate dropped from 5.9% in February 2016 to 5.2%.

Total US employment saw a seasonally adjusted increase of 447,000 from January, while the number of unemployed dropped by 107,000. The national unemployment rate eased 0.1 to 4.7%. The national labor force numbers continued expanding by 340,000, another indication that at least nationally, the economy still has room to grow to get to full employment.

California’s participation rate (seasonally adjusted) eased to 62.1% in February, while the US rate rose marginally by 0.1 to 63.0%. The California participation rate still remains near the previous lows from 1976, and well below the average pre-recession level of 65.6% in 2007.

Compared to November 2016, growing business and consumer confidence has seen the national labor force grow by 600,000 and the participation rate by 0.4 percentage points as workers have been drawn back in. In California, the labor force has remained essentially unchanged (net gain of 9,000), while the rate has dropped 0.2 points.

EDD reported that between January and February 2017, seasonally adjusted nonfarm wage and salary jobs grew by 22,900. January’s gains were revised up to 15,300 from the previously reported gain of 9,700.

Industries in the table below have been modified somewhat from previous reports to allow tracking as business climate changes occur in the state, in particular potential federal and state budget shifts and the impact of individual policies such as last year’s minimum wage increase. In particular, Social Assistance—which contains roughly 80% IHSS workers funded by state/federal sources and about 10% child care which also relies heavily on state funding—is broken out separately. Accommodation and Food Services are also listed separately. Both industries are heavily affected by minimum wage changes, but Food Services is more sensitive to this policy and has been one of the dominant sources of jobs growth since the recession. Transportation & Warehousing—one of the state’s key blue collar, middle class wage industries—will be tracked to gauge responses to increasing costs through the state’s climate change regulations and recent rules shifts in the South Coast Air Quality Management District.

In the January budget proposal, the Governor identified the increasing dominance of lower wage slots in total jobs growth as one of the key factors slowing state revenues growth. The following chart illustrates this trend, according to the industry wage classification used previously in other Center analyses of this issue. In the chart below, Private sector jobs are shown in the dark green bands, while Government is shown in the lighter. As indicated, nearly one-third of jobs growth over the past 12 months has been in the low wage industries. 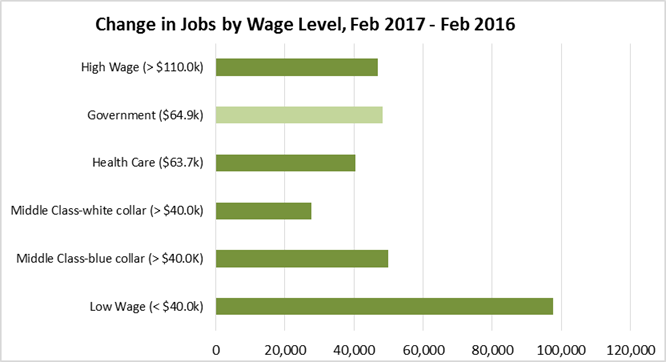 Unemployment rates (all data is not seasonally adjusted) continue to vary widely across the state, ranging from 3.6% in the Bay Area to nearly three times as large at 10.2% in the Central Valley.