The Labor Force data for January 2016 (seasonally adjusted; California preliminary) is shown below, along with the change from the prior month:

The related not seasonally adjusted numbers (California preliminary), with the change from January 2015:

Total US employment saw a seasonally adjusted increase of 615,000, while the number of unemployed dropped by 113,000.  California provided 8.5% of the total national employment increase.

Look at the unadjusted numbers, California’s labor force remained essentially unchanged for the year, while nationally, the labor force expanded by 0.8%.

EDD reported that between December 2015 and January 2016, seasonally adjusted nonfarm payroll jobs decreased by 1,500, while the unadjusted numbers showed seasonal losses in all industries but one.  The December job gains were revised to 47,700 from the previously reported 60,400.

Looking at the not seasonally adjusted numbers, the change in total payroll jobs from December 2015 saw a positive gain only in Total Farm (2,600).  Biggest declines were in Retail Trade (-85,400) as holiday hiring wound down, Administrative, Support & Waste Services (-49,400), and Arts, Entertainment & Recreation (-16,200).  Year to year gains, however, were positive in all industries except Mining & Logging (-4,700).

13 Counties in Double-Digit Unemployment; 13 are 5% or Less 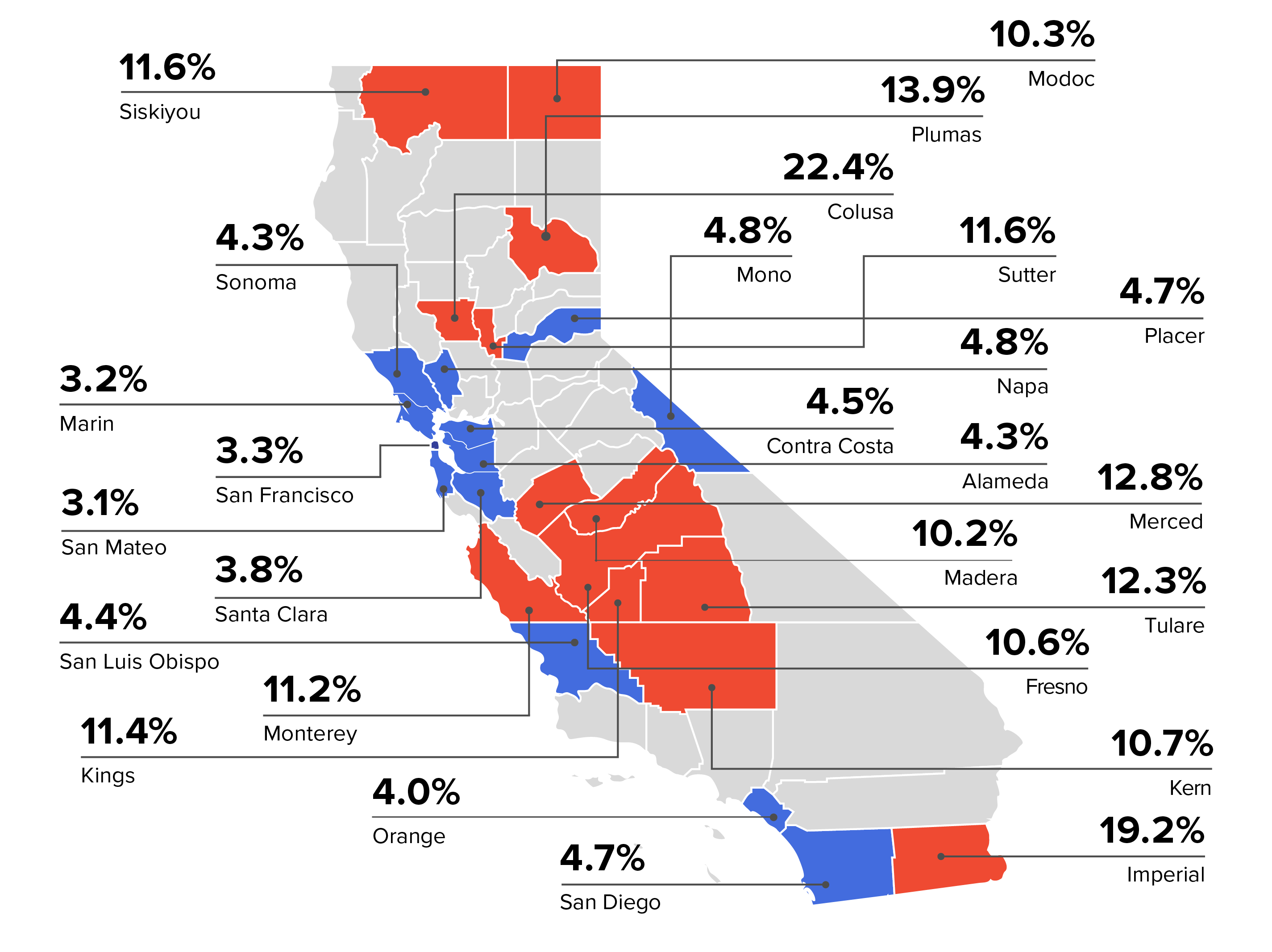 Unemployment rates (all data is not seasonally adjusted) continue to vary widely across the state, ranging from 4.0% in the Bay Area to more than double at 10.5% in the Central Valley.

Ratio of Highest to Lowest Rate: 2.64

Ratio of Highest to Lowest Rate: 7.23

EDD and BLS have begun releasing their annual data revisions, for the 2015 benchmark series.  Labor force revisions have been issued for 2015 (not seasonally adjusted data), and along with revisions to employment by industry.  Additional revisions will be released along with the next monthly labor force data releases on March 18 and April 15.  Due to continuing adjustments to the state-funded In-Home Supportive Services (IHSS) employment, EDD indicates the associated data series for MSAs will not be available until this summer.

The 2015 labor force revisions released so far for California show no significant change to the average numbers for the year.  The revisions show slightly higher employment in the first part of the year and slightly lower than previously reported in the second, but these shifts essentially net out on average.

There are regional differences, however.  On average over the year, half the regions show slightly higher employment, offset by those now reporting slightly lower.  Inland Empire showed the strongest gains, with employment revised upwards by 0.8%.  Almost all regions also had their number of unemployed by 2-3%, while Los Angeles was revised downwards by 3.2%.  These changes produced a net change of 0.1-0.2 percentage points in the average unemployment rate.