Employment Development Department and Bureau of Labor Statistics are currently going through their annual data revision process.  The Center’s data series and data estimates will be updated as the revisions become available, with the final revisions released in late April.  Until the process is completed, however, some of the historical comparisons will remain incomplete.

The Labor Force data for Janurary 2017 (seasonally adjusted; California preliminary) is shown below, along with the change from the prior month:

The related not seasonally adjusted numbers (California preliminary), with the change from January 2016:

California Employment Development Department’s (EDD) latest release shows on a seasonally adjusted basis, total employment rose 11,000 from December 2016, while the number of unemployed declined by 12,500.  Total labor force remained largely unchanged with a dip of only 2,500.

Total US employment saw a seasonally adjusted increase of 30,000 from December, while the number of unemployed increased by 106,000 as additional workers were drawn back into the labor force.  The national unemployment rate rose 0.1 point to 4.8%.

EDD reported that between December 2016 and January 2017, seasonally adjusted nonfarm wage and salary jobs grew 9,700 in January.  December’s gains were revised up marginally to 4,400 from the previously reported gain of 3,700.

Looking at the not seasonally adjusted numbers, job levels saw their usual seasonal drop-off from December 2016 to January 2017.  Over the year, hiring saw increases in all but two industries.  The change in total payroll jobs from January 2016 saw the largest increases in Health Care & Social Assistance (75,900), Government (50,100), and Accommodation & Food Services (36,200).  Declines were in Manufacturing (-5,800) and Mining & Logging (-3,300).

Unemployment rates (all data is not seasonally adjusted) continue to vary widely across the state, ranging from 3.8% in the Bay Area to 10.5% in the Central Valley.

California U-6 Unemployment Rate Eases to 11.3%

The broadest unemployment measure, U-6, incorporates number of unemployed, marginally attached workers, and persons employed part time for economic reasons.  On a 4-quarter moving average, the 2016 rate eased to 11.3% from 11.6% in the third quarter.  California’s rate compared to the US is shown in the figure below. 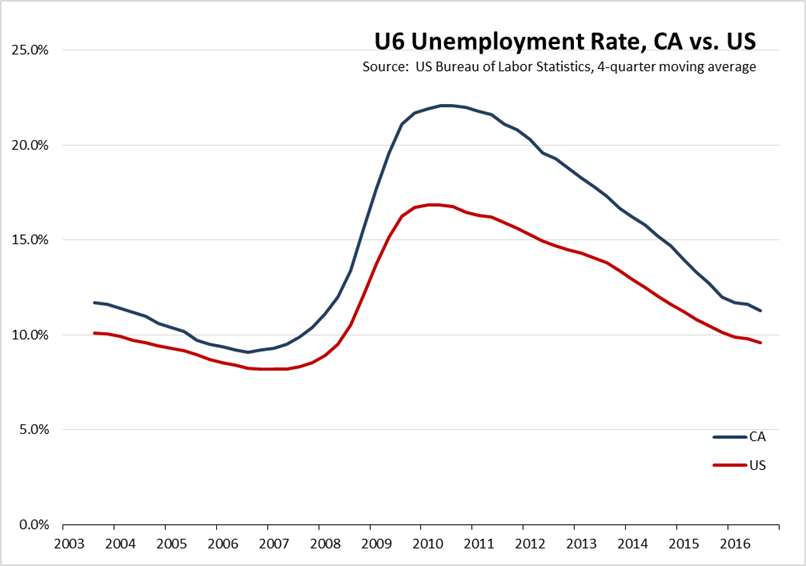