EDD’s revised data shows total employment (seasonally adjusted; January preliminary) was up 35,200 from December, while the number of unemployed rose 15,000.  Unemployment rate rose to 4.2% primarily as a result of continued slow growth in the labor force.  The unadjusted rate rose 0.1 point from the year earlier to 4.8%.

California tied with Kentucky for the 13th highest unemployment rate.

Total US employment saw a seasonally adjusted loss of 251,000, with the number of unemployed dropping 241,000. The unemployment rate rose to 4.0%. 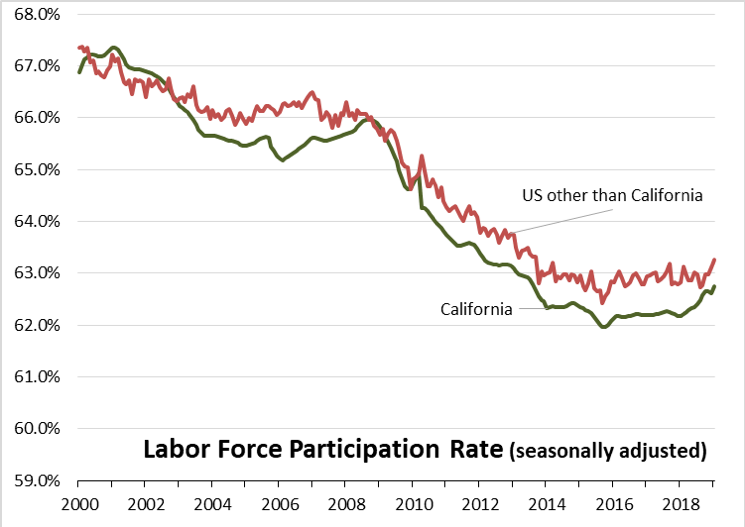 California’s seasonally adjusted labor force participation rate rose to 62.7% as additional workers reentered the workforce. Nationally, the participation rate showed a comparable rise. Although the gap has narrowed, the state continues to experience lower than average participation rates in spite of having a relatively younger population than the rest of the US.

The revised labor force data show a more sustained but modest rise in the participation rate beginning in December 2015. For the 12 months ending January 2019, the seasonally adjusted data shows the California labor force grew 1.5% compared to the rest of the US at 1.3%. 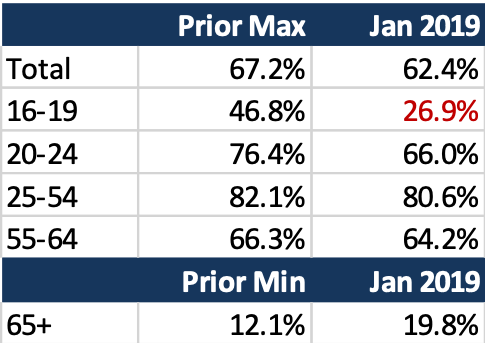 Labor force participation by age (12-month running average) grew for all groups except for youth age 16-19. The continued low rates for youth and young adults in particular have implications for life-time earnings potential due to the delay in acquiring essential workplace skills.

Employment Growth Ranking—California Back to 1st

Over the 12 months ending in January, the total number of persons employed (seasonally adjusted) grew by 321,900. As a result of the data revisions, California was in 1st place ahead of Texas, which saw an additional 252,100 persons employed over this period.

Based on percentage growth, California had a 1.7% expansion in employment, above the US average of 1.4%. Ranked among the states, California rose to 10th place, while Arizona led at 3.4%.

Nonfarm jobs (seasonally adjusted) were up 3,000 from December. December’s gains were revised to 19,700 from the previously reported 24,500.

For the 12 months ending January, total jobs growth was 246,400, keeping the state in 2nd place behind Texas which gained 292,000 jobs in this period. 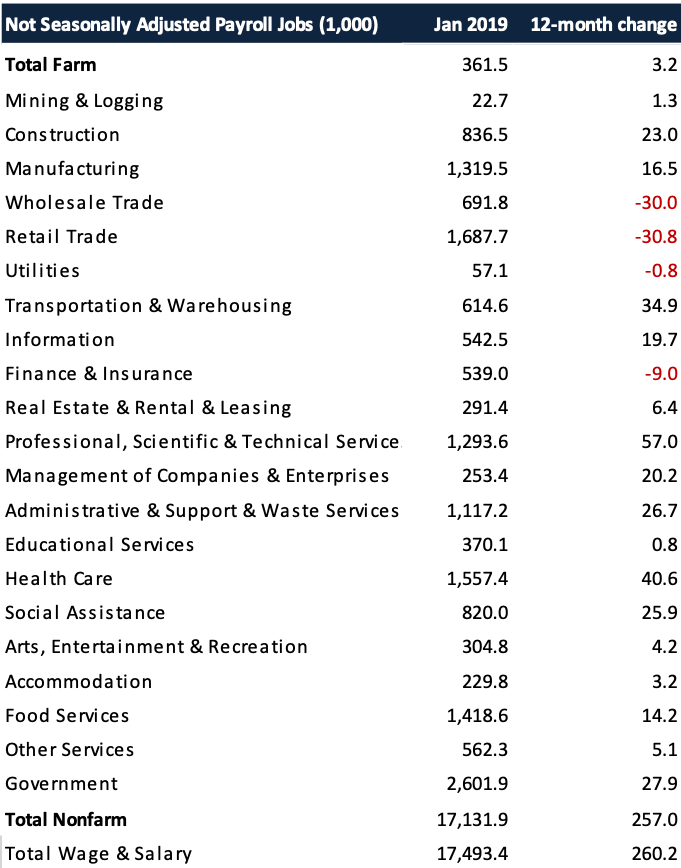 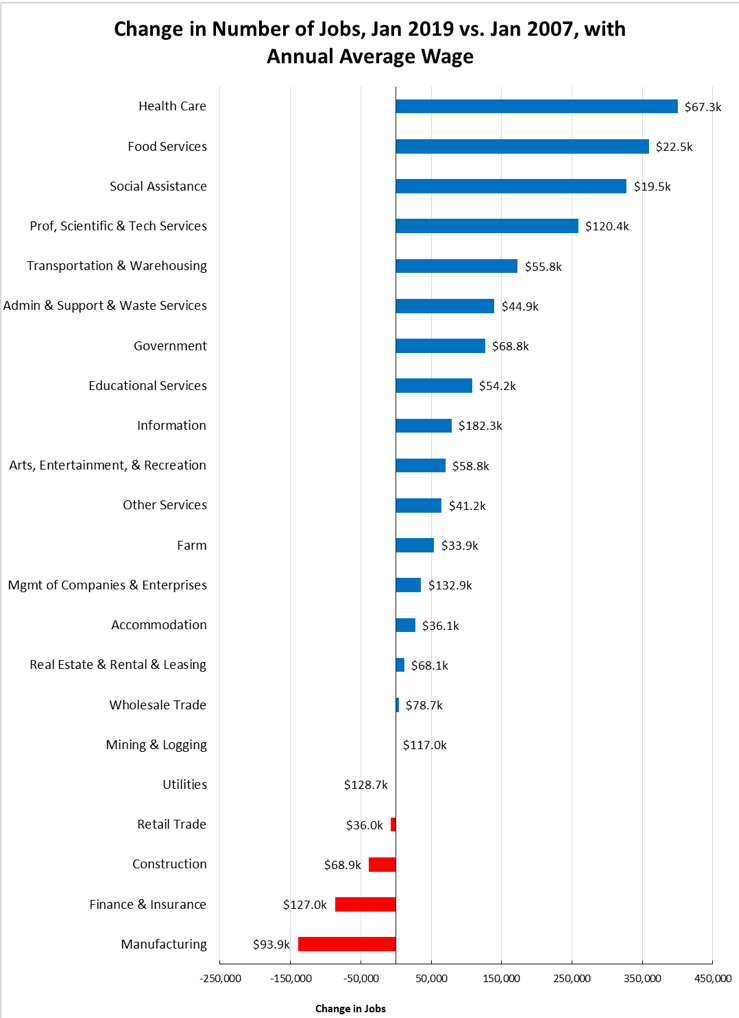 Jobs growth within the traditional middle class wage—especially blue collar industries such as Manufacturing, Construction, and Mining & Logging—continues to lag. Finance & Insurance also continues to lose ground. Of these, Construction has gained ground in the past year as activity has picked up. However, construction jobs remain 83,300 below the 2007 peak—in part due to seasonal factors—and 129,800 (13%) below the pre-recession high in 2006. 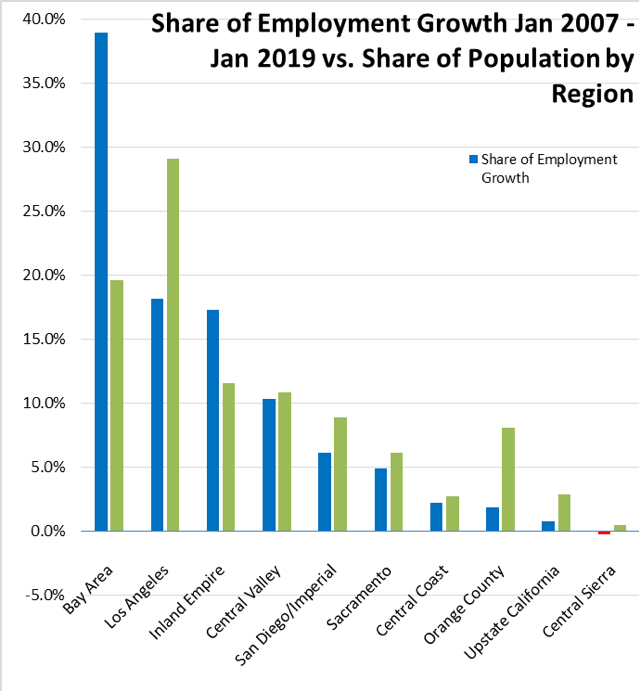 Containing 19.6% of the state’s population, the Bay Area has accounted for 38.9% of net employment growth compared to pre-recession levels.

Los Angeles Region, with 29.1% of the population, accounted for only 17.2% of net employment gains. 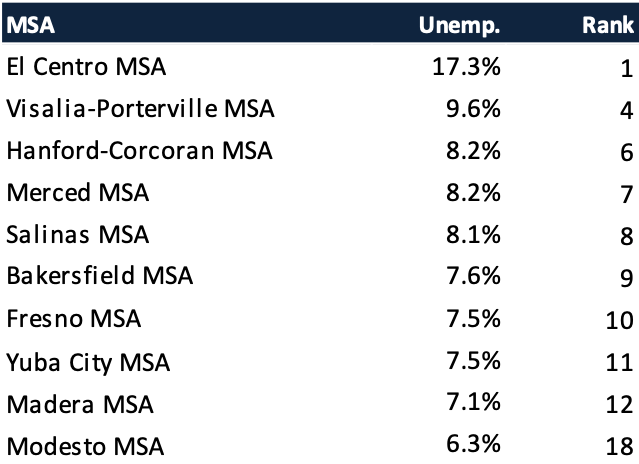 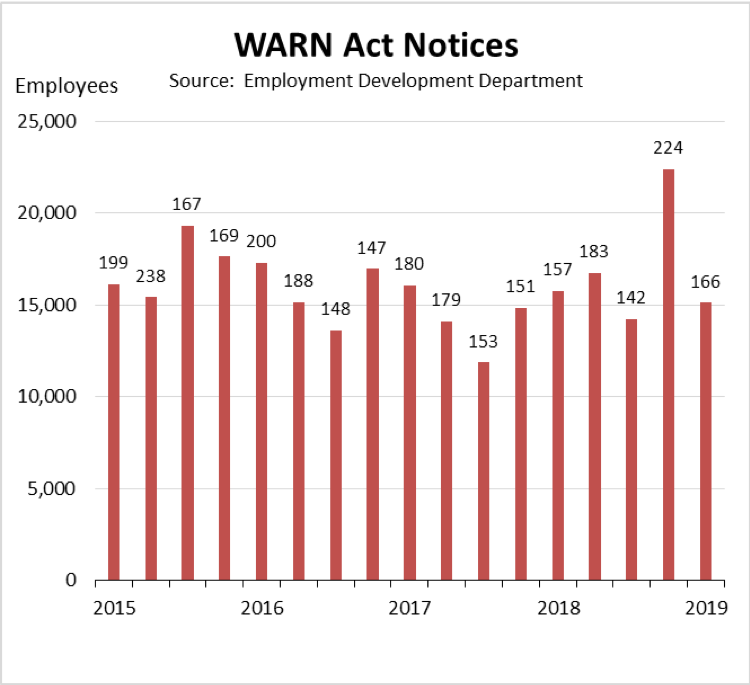 Under the State Worker Adjustment and Retraining Notification (WARN) Act, employers are required to issue a 60-day notice prior to a plant closing or mass layoff. The chart shows the number of employees affected by quarter, along with the number of notices issued.

Note that any final employee actions may differ from the number originally reported in the required notice. Companies may also issue revised notices affecting the same facility, but the EDD summary totals do not account for this factor.

All labor force and jobs data above reflects the annual revisions to the historical data by EDD and BLS.  The Center’s data series have been updated as well.  In general, the revisions affect data beginning in 2014 for the US, states, and Los Angeles County, although in some cases the revisions extend back to 1990.

The final revisions for substate areas will be released along with the February data on March 23.  At that time, we will also revise the Legislative District estimates to incorporate the BLS/EDD revisions along with the updated American Community Survey factors.