EDD reported total employment (seasonally adjusted; July preliminary) was down 24,600 from the revised June numbers, while the number of unemployed dropped 10,500.  Unemployment rate improved to 4.1%.  The unadjusted rate was down 0.1 point from the year earlier to 4.1%.

Total US employment saw a seasonally adjusted gain of 283,000, with the number of unemployed rising 88,000 as the national labor force grew.

The continuing stall out in labor force growth has significant implications for the California economy.  The increasing difficulty of finding qualified workers, and in some cases any workers, puts California businesses at a competition disadvantage to other states where the expansion continues to draw workers into the labor force.  At the same time, this situation produces caseload demands on state and local welfare and other social assistance budgets well above where they should be given the current circumstances of the recovery. 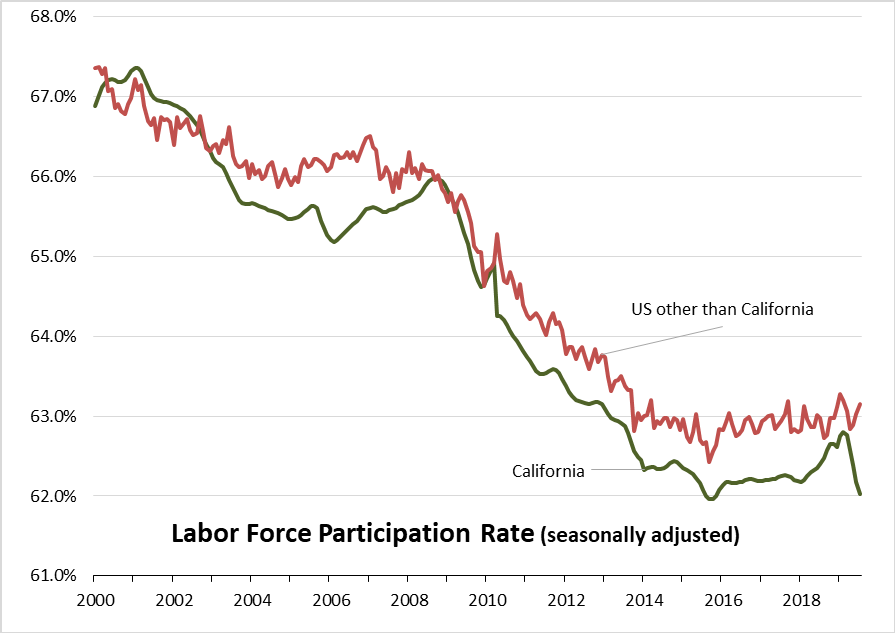 In another sign of the economy’s slowing, the total number of persons employed (seasonally adjusted) over the 12 months ending in July shrank by 600.  California plummeted to 43rd place with Texas leading with an additional 227,700 persons employed over this period, and Florida in second place with a gain of 139,000.

Based on percentage growth, California had a 0.0% contraction in employment, below the average for the rest of the US at 1.0%.  Ranked among the states, California’s growth rate dropped to 42nd place, while Tennessee led at 3.2%.

Adjusting for population size, California came in at 13th among the states, with a 12-month jobs growth rate of 1.8%

Jobs growth within the traditional middle class wage—especially blue collar industries such as Manufacturing, Construction, Mining & Logging, and Utilities—continues to lag.  After stronger gains during the recovery, both Wholesale and Retail Trade have continued to show weakness, reflecting competitive pressures from nontraditional channels at the same time these industries have been weakened by state policies resulting in rising operating costs.  Finance & Insurance also remains in the negative column as companies have moved back office and other operations out of the state. 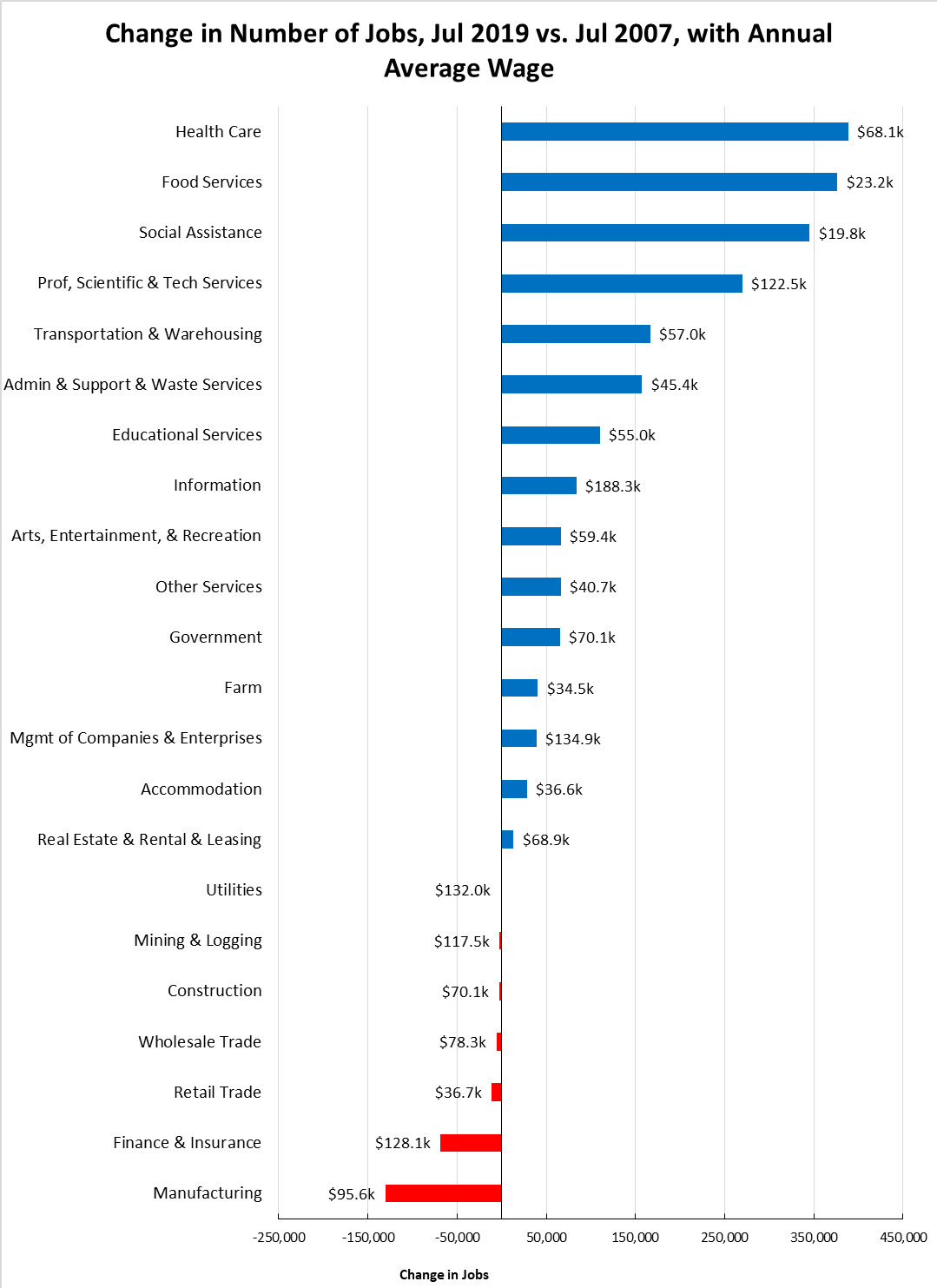 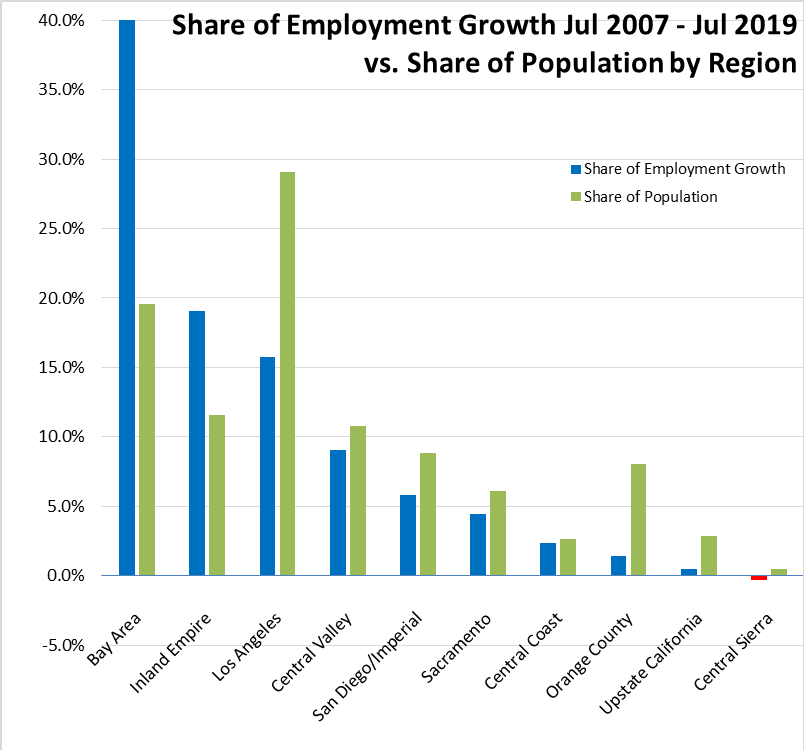 Chart of the Month: Self Employed

As a means to fulfill the dream of “becoming one’s own boss,” self-employment can be a path to upward mobility, a way to gain more flexibility in working hours and conditions, or as an alternative when other employment alternatives are limited by availability, commuting distances, or skills requirements.  Self-employment also is an indicator of overall entrepreneurial activity within the economy.

The chart below compares the self-employment rate for California to the rest of the US.  The self-employed data is taken from the Current Population Survey as a 12-month moving average and expressed as a percentage of total civilian population (age 16 and over).

The data contains the following components:

•   The data is only for self-employed as the main job. In addition, a number of workers also engage in self-employment as a second job, either for income purposes or as a step towards leaving wage and salary employment and becoming self-employed full time. 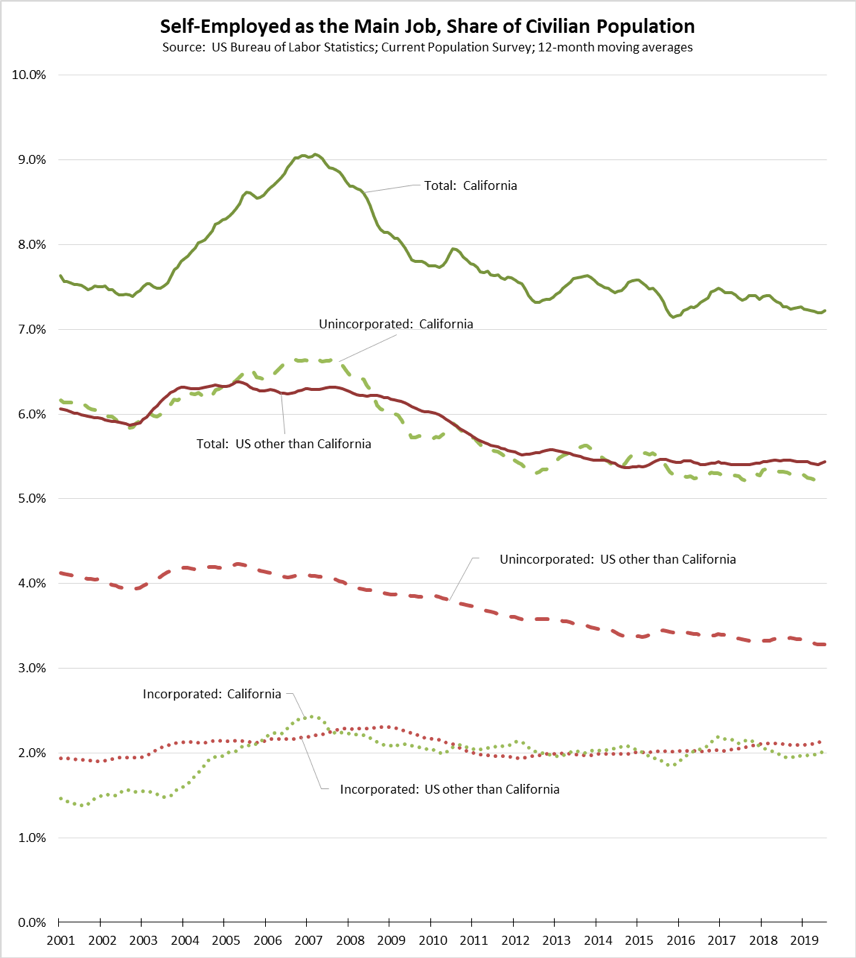