While the July numbers were generally positive, they remained at levels keeping California’s recovery behind much of the rest of the country. The largest gap still remains in the relative performance for recovered nonfarm jobs, although the far slower pace in employment recovery is likely to affect this component as well as labor shortages continue impinging on the jobs change potential. 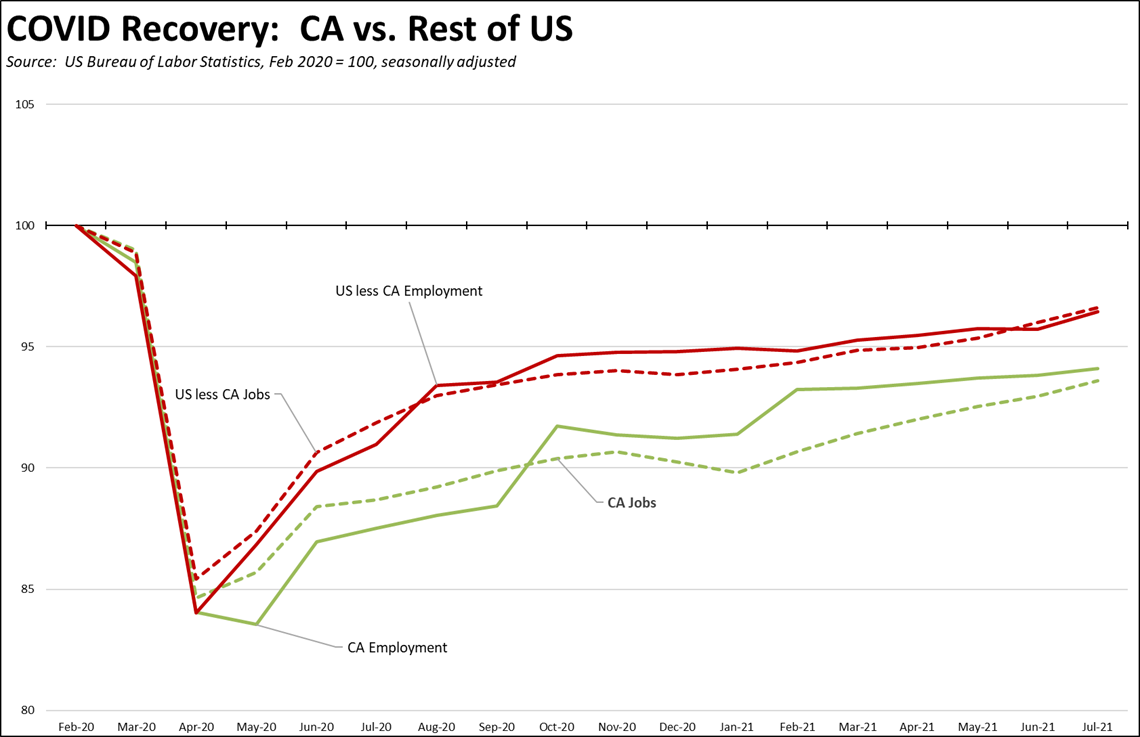 So far in 2021, California has seen nonfarm jobs increase by 591,100. Putting aside January when jobs were still contracting as the result of the second round of closures ordered by the state towards the end of 2020, the jobs increase in the positive months to date has been 671,100.

These numbers, however, are taken from the headline, seasonally adjusted numbers. While the seasonal factors tend to be particularly pronounced in July due to summer school closings and tourism in otherwise normal years, these continue to be overwhelmed by the pandemic factors and continuing uncertainty from state and local governments over when, how, and if businesses are allowed to open and begin restoring jobs.

Looking instead at the unadjusted numbers, California like the rest of the nation actually saw a job loss in July. Total nonfarm jobs dropped 59,300 in California. Total jobs change to date for 2021 also comes in lower at 333,500.

The July job loss, however, was due primarily to losses in government from summer school closings, although less so than in prior years due to the uncertain status of the public schools during the pandemic. Looking only at private sector nonfarm jobs, the number was up 98,500 for the month and 471,000 to date for the year.

Going back the adjusted numbers, the results from recent months while positive, have yet to do much to shift the state’s relative performance on jobs recovery. California has seen the largest number of jobs among the states in recent months, but it also experienced the largest contraction in March and April 2020 as the result of the state’s pandemic strategies, and again at the end of 2020 as state-ordered reclosings caused another downturn during the most critical cash flow period for retail and service businesses. Comparing the July numbers to pre-pandemic February 2020, California ranks 9th lowest in jobs recovery among the states. By comparison, Utah and Idaho have already moved to jobs expansion. Taken as a whole, the other states are 3.4% below the pre-pandemic jobs level. California is at 6.4% below. 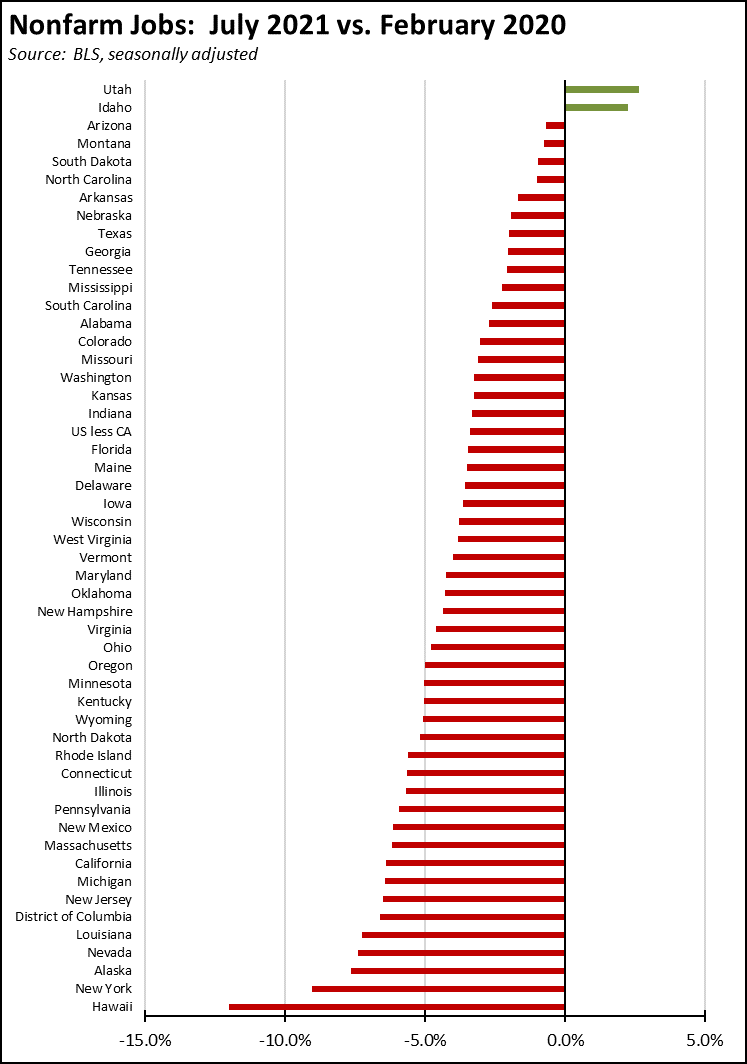 Shifting this recovery picture faces several headwinds, not least of which is renewed uncertainty being generated by the Delta variant and the proliferation of new and inconsistent jobs restrictions coming from federal, state, and local agencies. Supply constraints due to production and goods movement blockages both in California and internationally present a risk to sales and jobs levels while also contributing to inflationary pressures.

The slowing employment trend in California compared to the other states also suggests labor shortages will remain a constraint, especially when combined with continuing state policies. Even when faced with a potential $54 billion shortfall, California was the only state choosing to set aside resources to eliminate self-employment opportunities during the depths of the downturn through increased enforcement of AB 5 (2019). In a recent release addressing the pending September 4 expiration of the enhanced federal pandemic unemployment benefits, the state chose to focus on other assistance programs—including several that recently have been enhanced or otherwise expanded—to enable unemployed workers to remain outside the labor force. Other states, instead have concentrated on returning workers to the labor force by promoting jobs listings, jobs assistance, jobs training, and even in some cases using assistance funds to provide jobs bonuses to workers moving from unemployment to earned income.

As a result, instead of growing jobs, most parts of the state’s economy remain in the recovery stage. Transportation & Warehousing, Utilities, and state-supported jobs in Social Assistance have moved to the growth stage. The bulk of the state’s industries still face a prolonged period of regaining lost ground, and some—as reflected the most current Department of Finance projections—are likely to never recover to prior levels as the result of work, sales channel, and technology changes accelerated by the pandemic shutdowns. 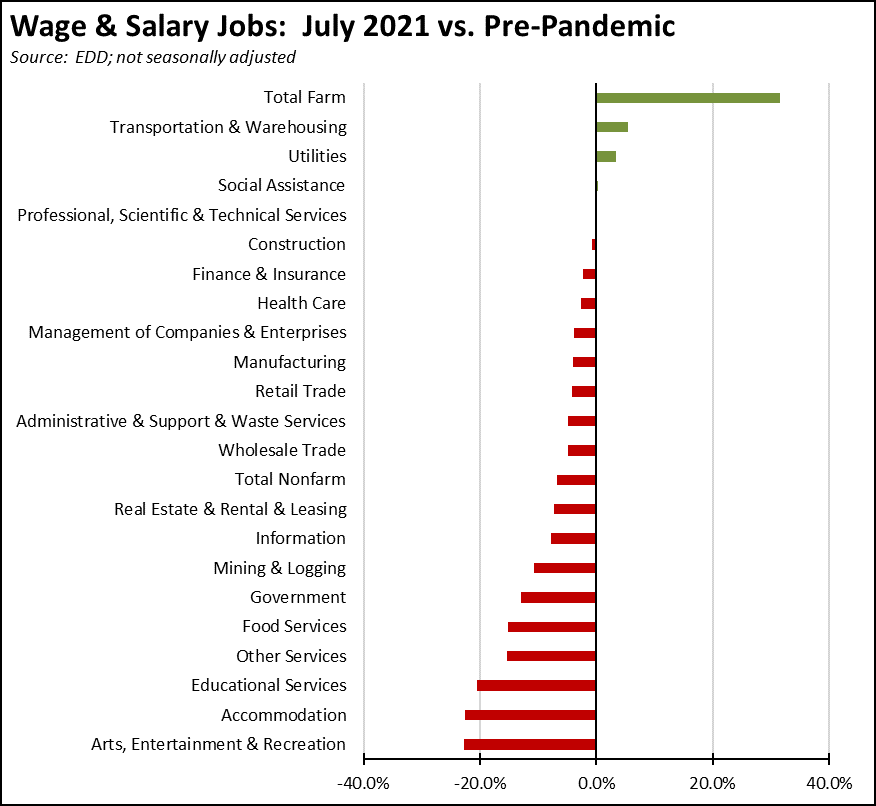 California’s reported unemployment rate (seasonally adjusted) in July remained at 7.6 % compared to the revised 7.6% in June. California tied with New York and New Mexico for the second highest unemployment rate among the states.

The reported national numbers show US unemployment rate (seasonally adjusted) dropping 0.5 point to 5.4% as the result of much stronger employment expansion in the other states. Employment was up 1,043,000, while unemployment dropped 782,000. The labor force rose 261,000, producing a 0.1 point gain in the participation rate to 61.7%.

The seasonally unadjusted numbers, however, show stronger levels. Under this series, employment rose 1,313,000 nationally while growing 180,100 in California.

As of the July numbers, California has regained 58% of the Nonfarm jobs lost to the state shutdowns. The rest of the states combined were further along in recovery, having regained 77% of the jobs lost in the pandemic period. Using this measure of recovery, California was the 11th lowest among the states and DC.
California job growth was led by Accommodation & Food Services (44,700), Government (35,900), and Arts, Entertainment & Recreation (11,900). Losses were in 6 industries led by Manufacturing (-4,500), Retail Trade (-2,300), and Transportation, Warehousing & Utilities (-1,400).

6
Counties with
Unemployment
Above 10%

The number of counties with an unemployment rate at 10% or above notched down to 6. The unadjusted rates ranged from 4.5% in Marin to 18.9% in Imperial.