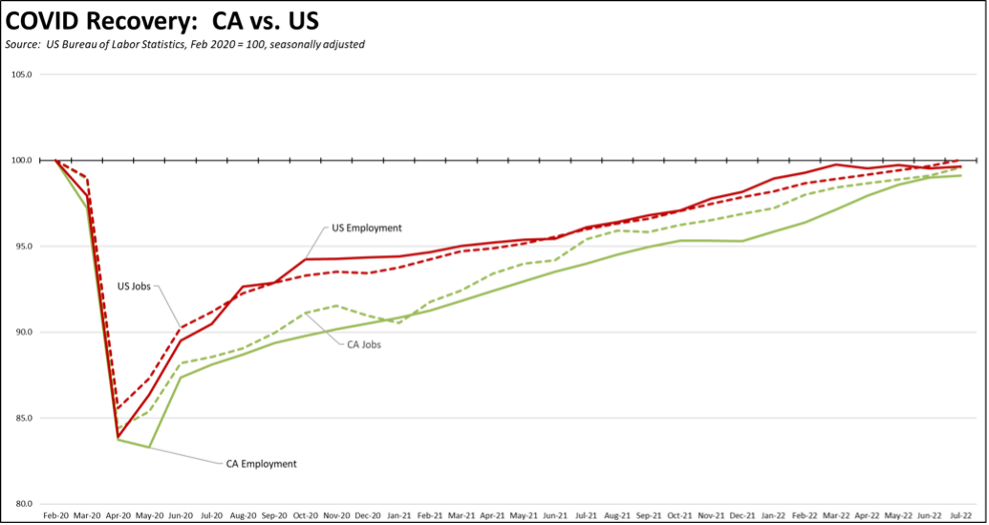 After three months in the 2nd or 3rd spot, California returned to leading the states with nonfarm job gains of 84,800. However, California only narrowly beat out Texas (72,800) and Florida (73,800) which on a population-adjusted basis still performed better. Year to date, California saw a jobs increase of 478,000 compared to Texas at 458,000. Texas, however, has only three-quarters the population of California. Texas also surpassed its per-pandemic recovery point last November—the 458,000 jobs represent jobs expansion while California’s 478,000 still consist entirely of jobs recovery.

Overall, the number of states besting the pre-pandemic jobs level remained at 15 but combined produced the jobs expansion to overcome the continued jobs lag in the remaining states to push the nation as a whole past the pre-pandemic recovery point. California remained at the 25th highest measured by recovery rate. The currently most vibrant portion of the national economy instead has shifted to an interior arc running from the top of the Inter-mountain to the Southeast states. 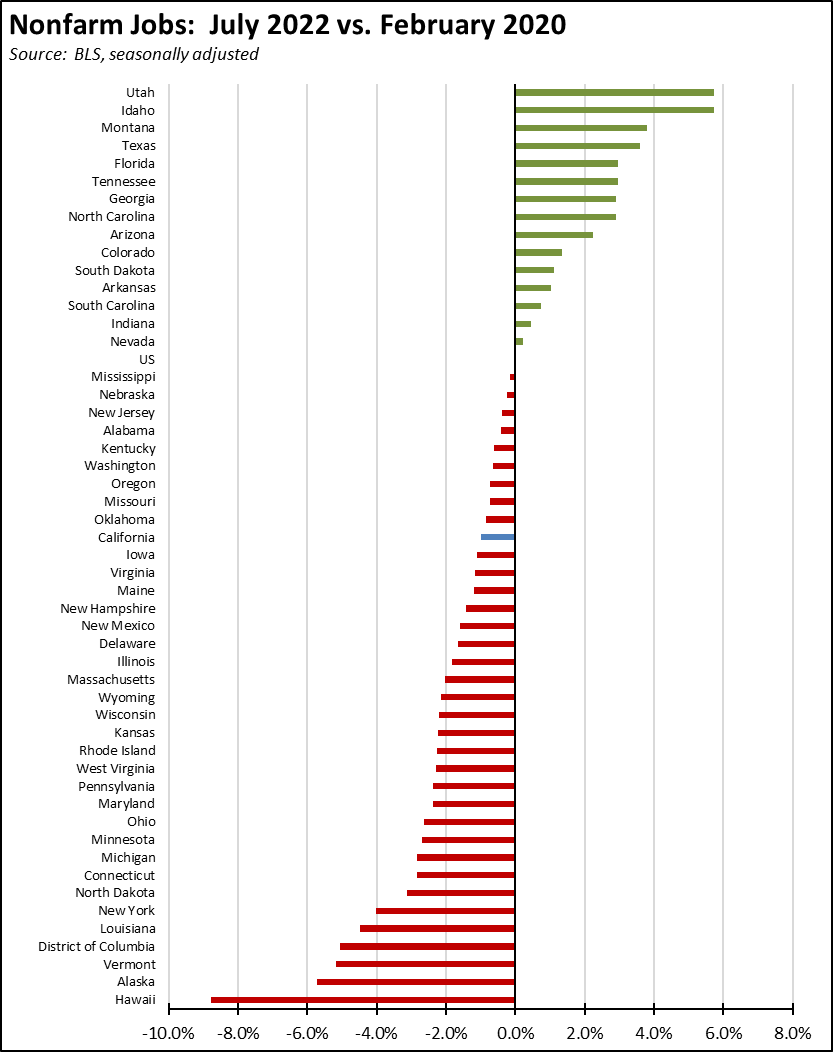 In the employment numbers, California notched up to 34th highest among the states when measured by a return to the pre-pandemic employment peak, while an increasing number of states (31) showed more people working than before the pandemic and providing the workforce essential to expanding jobs. The state’s unemployment rate—while dropping to the lowest on record in the current data series—actually notched down to only 12th highest among the states, while 37 states including California had unemployment rates at or below the February 2020 level. In total, 14 states had unemployment rates at or below the current data series low, another reflection of the ongoing labor shortage. 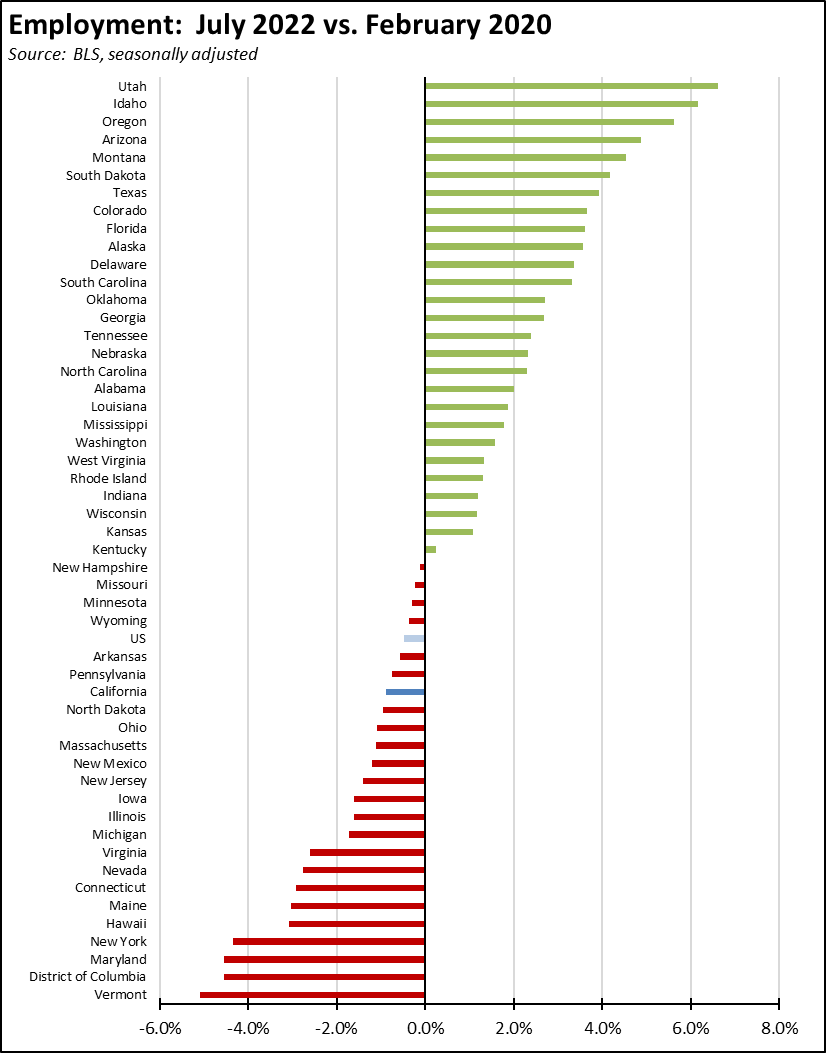 The unemployment insurance claims data also reflects this continuing lag in getting people back to work. Weekly initial claims (4-week moving average) remain above the pre-pandemic average in 2019 but have been converging more closely in recent weeks. In contrast, the total US numbers have been running 10-12% below the 2019 average. For the past 4 weeks ending with the week of August 13, California’s initial claims were 20% of the national total, while insured unemployment (a proxy for continuing claims) in the 4 weeks through the week of August 6 was 22% of the total. 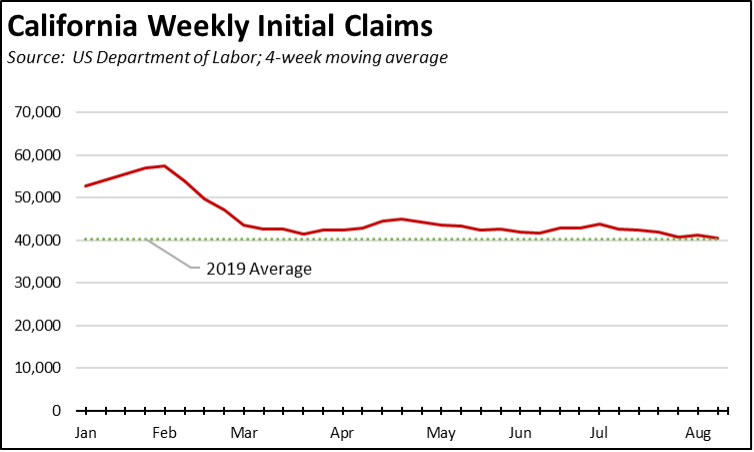 Nationally, real GDP shrank in both the 1st and 2nd quarters of 2022, meeting the traditional definition of a recession. These results, however, stem from a number of factors more specific to the pandemic conditions including a decline in the nearly unprecedented level of government spending and trade numbers influenced more by supply chain blockages and efforts to bypass port congestion. Other indicators, including the job and unemployment numbers, are more promising. The most recent results from the Atlanta Federal Reserve Bank GDPNow current indicator tracking suggest real GDP in the 3rd quarter is ahead by 1.6%, although the overall trend currently shows a steep decline in the running estimate.

The state revenue tracking continues to show some weakness in the state numbers. As previously indicated, the June cash flow report from the Department of Finance showed the 2021-22 final revenues $2.2 billion below the 2022 Budget Act projections, with the capital gains-dependent Personal Income Tax receipts $4.5 billion lower. Although July is typically not a big revenue month, the preliminary Controller cash flow numbers show the first month of 2022-23 revenues off $1.1 billion (off 10.9%), with Personal Income Tax down $0.8 billion (down 11.0%).

With only minimal budget actions to deal with the substantial $17.5 billion debt, California’s unemployment insurance fund remains one of the least prepared among the states to handle a renewed recession. In the most recent trust fund solvency rankings, the US Department of Labor shows California near the bottom, coming in only barely above New York and the Virgin Islands.

California also continues to carry by far the largest debt owed to the federal trust fund, while every other state except New York and Massachusetts has substantially reduced or paid off their debt including—as specifically authorized—use of federal pandemic assistance funds for this purpose. With New Jersey again moving into a positive balance, only 6 states and the Virgin Islands currently are in arrears to the federal fund, with California accounting for 60% of the total debt in the latest accounting. 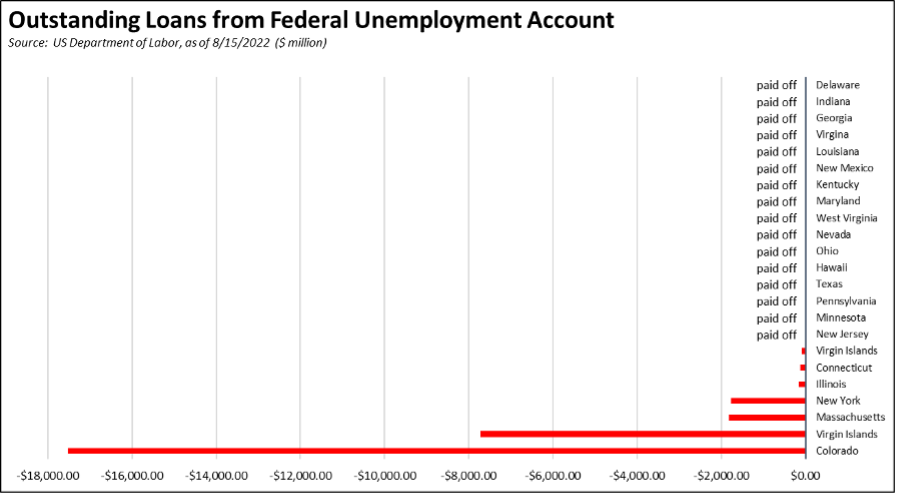 While these concerns tend to be brushed off on the contention that the current and looming employment tax increases are absorbable, they are only one component of a range of costs related to employing workers in this state, and these employment costs are in turn only one component in a range of costs of doing business that are far higher in this state. In fact, a recent study indicates that when all these costs are totaled, California ranks as the 5th most costly state to employ workers. Based on average salaries, it currently costs California employers another $18,330 annually to cover state and federal employment taxes, health insurance, and retirement.

California’s reported unemployment rate (seasonally adjusted) in July improved 0.3 point to 3.9%, the lowest on record in the current data series as labor force growth stalled out. California had the 12th highest unemployment rate among the states and DC.

After 4 months of weakening results, California nonfarm wage and salary jobs were up 84,800 (seasonally adjusted) in July, while the gains in June were nearly doubled to 37,300.

With the July numbers, California regained 97% of the nonfarm jobs shuttered in the state shutdowns, while the US as a whole just passed the 100% milestone. The seasonally adjusted numbers showed gains in all but 2 industries, with the increases led by Health Care & Social Services (16,900), Accommodation & Food Services (14,100), and Construction (11,400). Losses were in Finance & Insurance (-1,800) and Real Estate & Rental & Leasing (-100).

The number of counties with an unemployment rate at 10% or more remained at 1. The unadjusted rates ranged from 1.9% in San Mateo to 14.2% in Imperial.