EDD reported total employment (seasonally adjusted; March preliminary) was down 16,900 from February, while the number of unemployed rose 14,400. Unemployment rate rose to 4.3%. The unadjusted rate was up 0.2 point from the year earlier to 4.6%.

Total US employment saw a seasonally adjusted drop of 201,000, with the number of unemployed dropping 24,000. The unemployment rate remained at 3.8%. 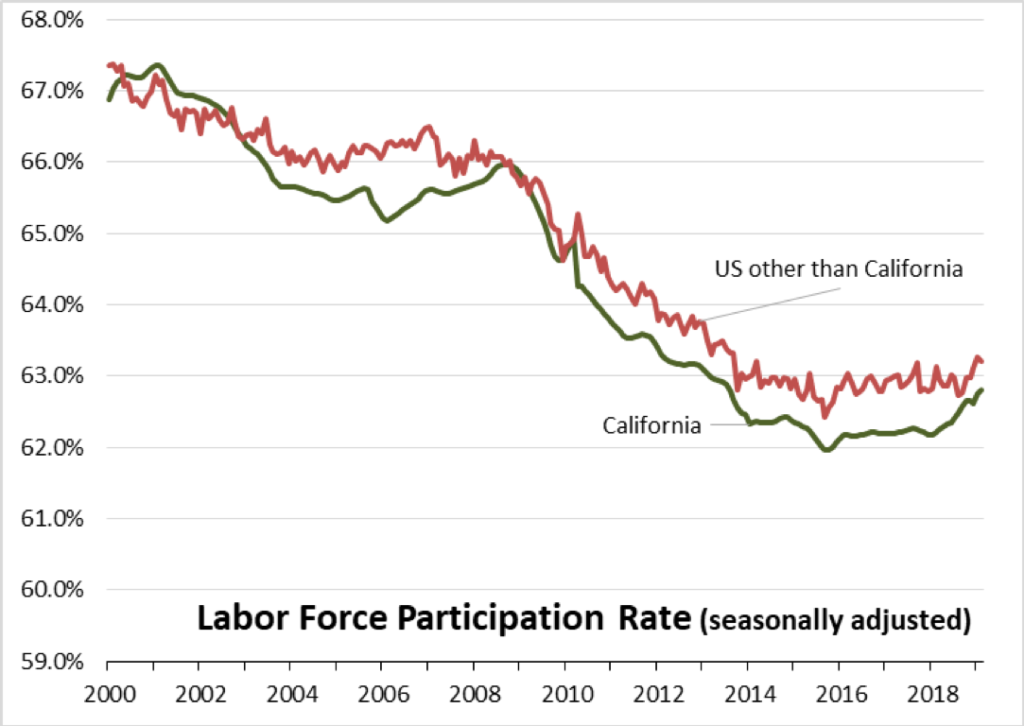 For the 12 months ending March 2019, the seasonally adjusted data shows the California labor force grew 1.4% compared to the rest of the US at 0.7%.

Labor force participation by age (12-month running average) grew for all groups except seniors. The continued low rates for youth and young adults in particular have implications for life-time earnings potential due to the delay in acquiring essential workplace skills. While more people are working past age 65, these gains do not offset the sharp drops in the youngest groups and softness in the prime working age groups.

Over the 12 months ending in March, the total number of persons employed (seasonally adjusted) grew by 273,800. California remained in 1st place ahead of Texas, which saw an additional 252,500 persons employed over this period.

Based on percentage growth, California had a 1.5% expansion in employment, above the average for the rest of the US at 1.0%. Ranked among the states, California’s growth rate dipped to 17th place, while Arizona continued to lead at 3.2%.

Nonfarm jobs (seasonally adjusted) were up 24,500 from February. February’s gains were revised to 20,900 from the previously reported 14,600. 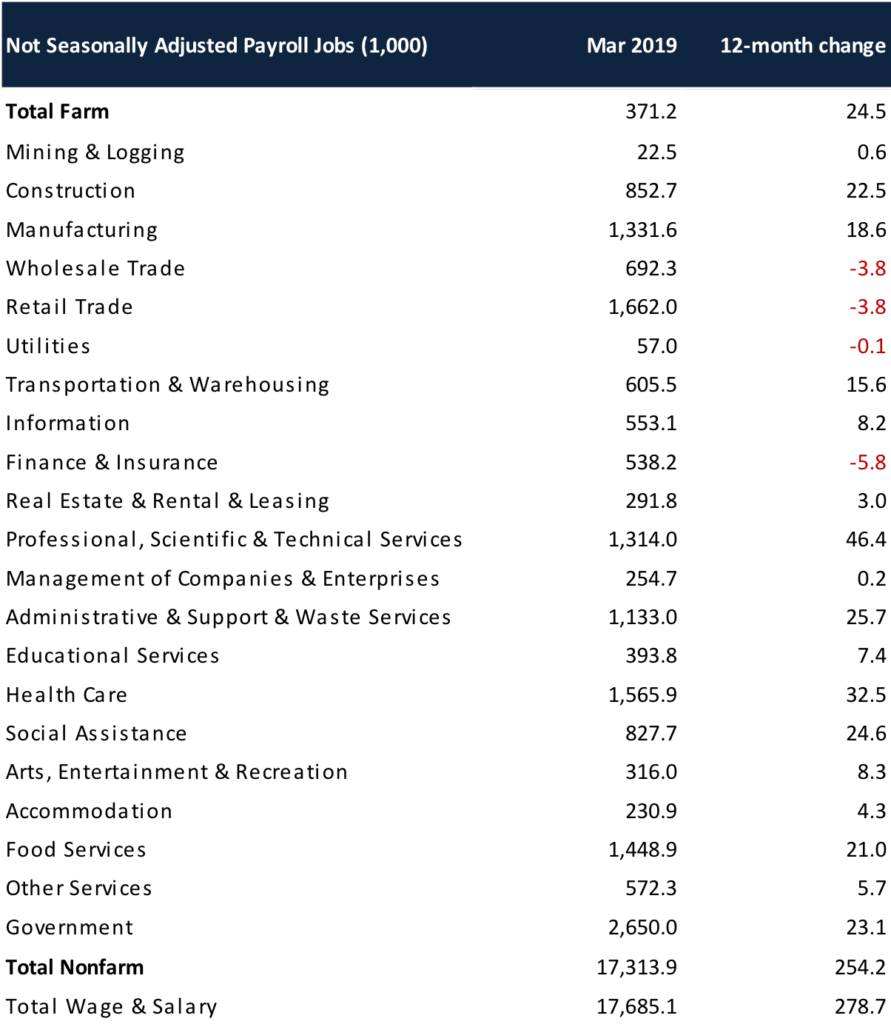 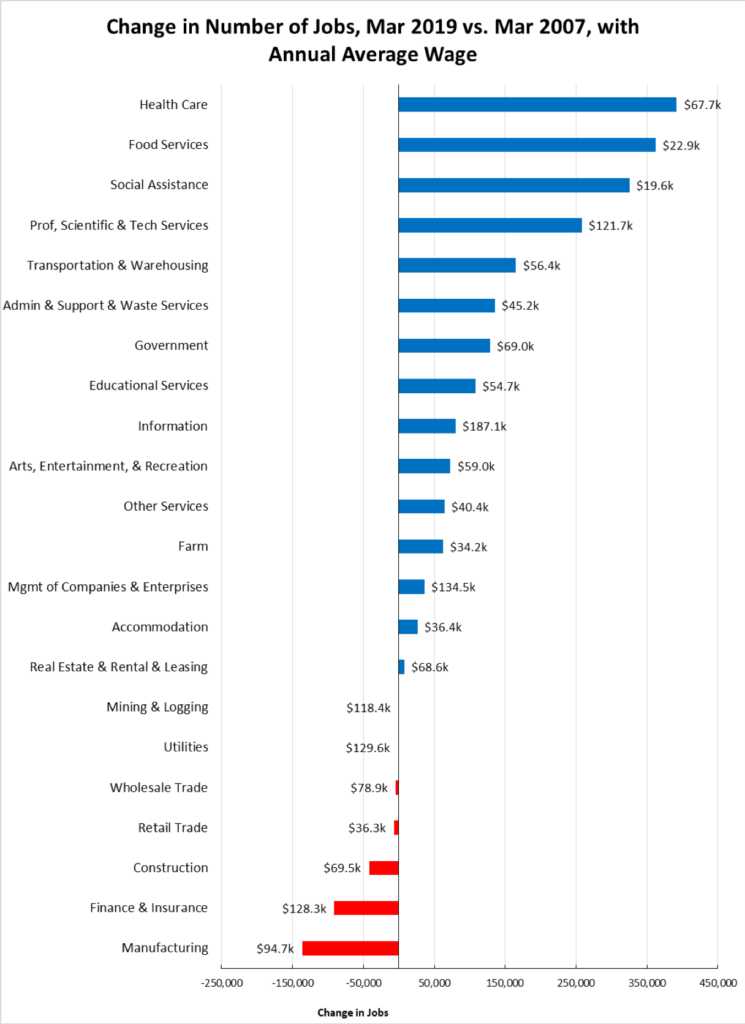 Jobs growth within the traditional middle class wage—especially blue collar industries such as Manufacturing, Construction, and Mining & Logging—continues to lag with the heavily blue collar Utilities beginning to show shrinkage as well. After stronger gains during the recovery, both Wholesale and Retail Trade have dipped into negative territory, reflecting competitive pressures from nontraditional channels as well as greater use of technology in response to growing costs for labor, energy, rent, and regulation. Finance & Insurance also continues to lose ground. 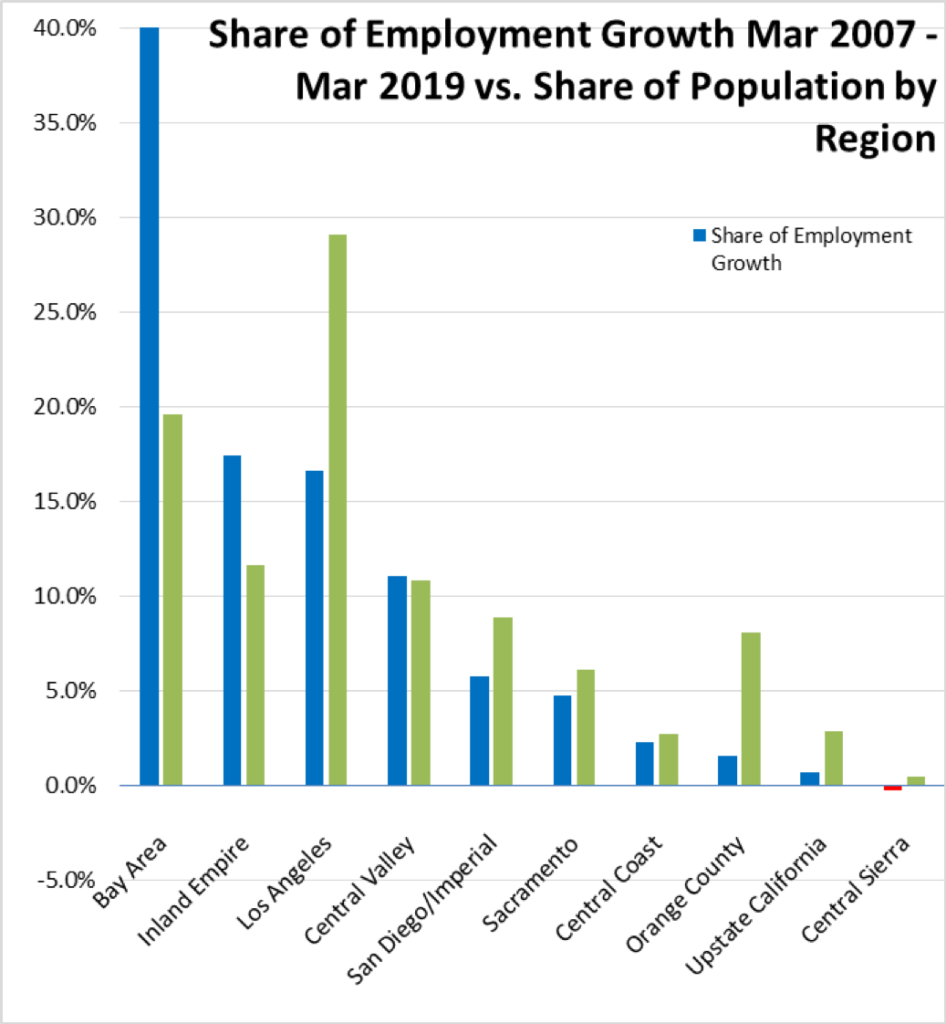 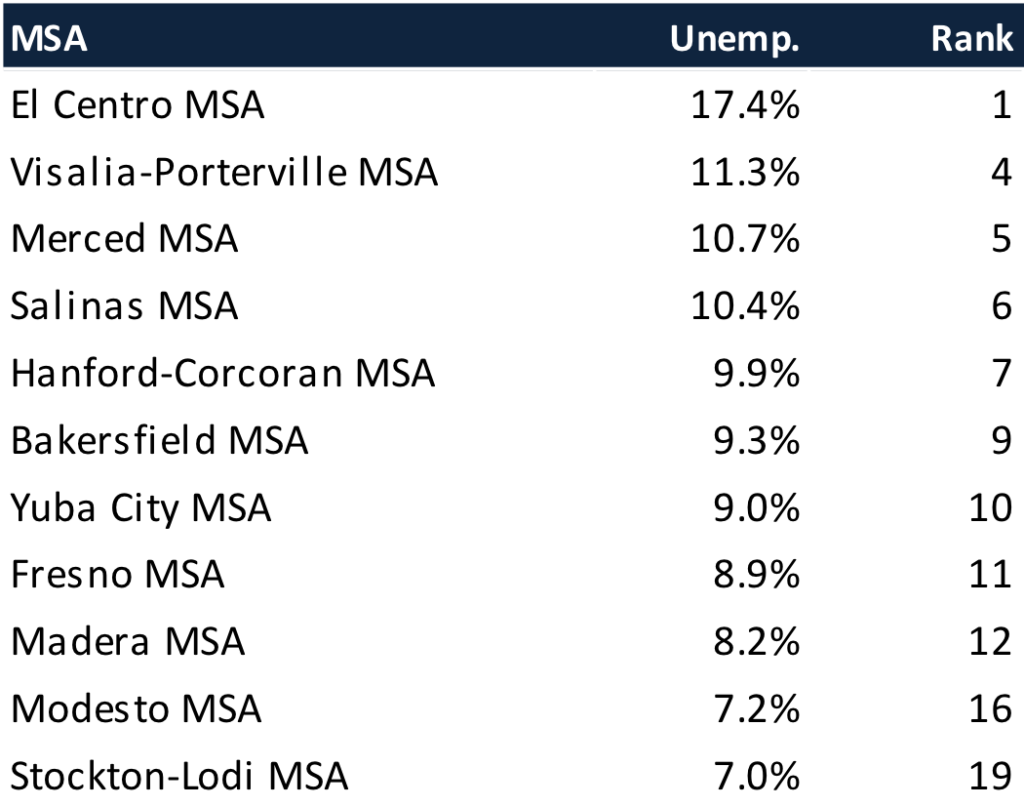 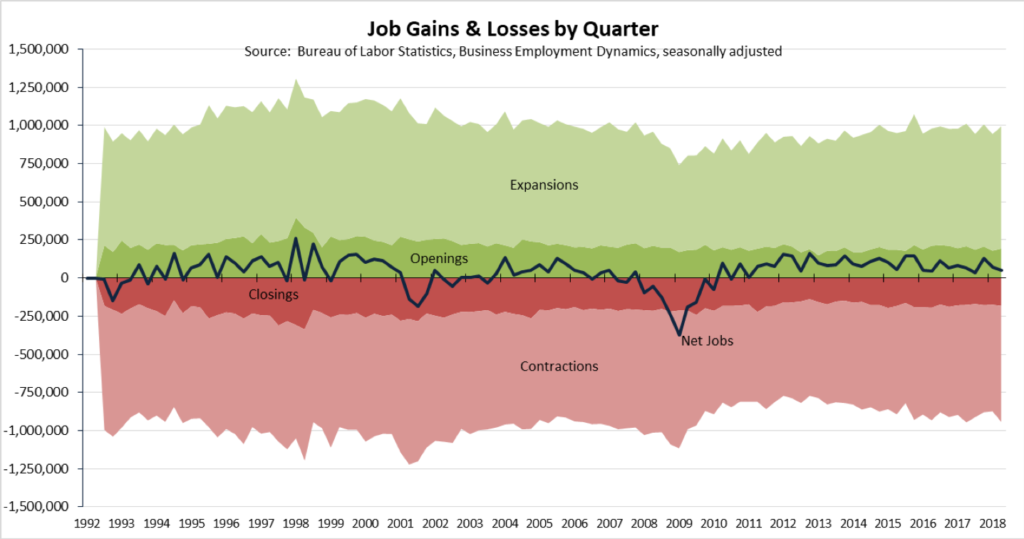 The job numbers reported each month in essence represent a net number measuring the increase or decrease in the stock of jobs. Underlying this number is considerable dynamism within the economy as establishments are opened and closed, and as some add jobs while others reduce as a result of seasonal, cyclical, and individual financial factors.

Note that establishment is not the same as a firm, as a firm may include one or multiple establishments that are co-located or that are located at different points around the state. The data also covers wage and salary private employment, and does not include self-employed workers, religious organizations, most agricultural workers on small farms, Armed Forces members, and other workers not covered by the Unemployment Insurance program.

Data for four components by quarter are summarized in the chart above for California, with the resulting Net Jobs shown by the blue line. The data indicates relatively greater churn in the economy during the 1990s as the economy responded to shifts in both housing and, following the loss of aerospace jobs, in manufacturing. Rising employment losses from establishment contractions combined with dips in expansions produced the jobs results seen in the two recessions occurring during the 2000s.

Gross job gains (openings and expansions) and losses (closings and contractions) by industry are shown in the charts below. Over the most recent four quarters available, gains were led by Professional & Business Services, Education & Health Services, and Leisure & Hospitality. With a change in order, losses were led by Professional & Business Services, Leisure & Hospitality, and Education & Health Services. 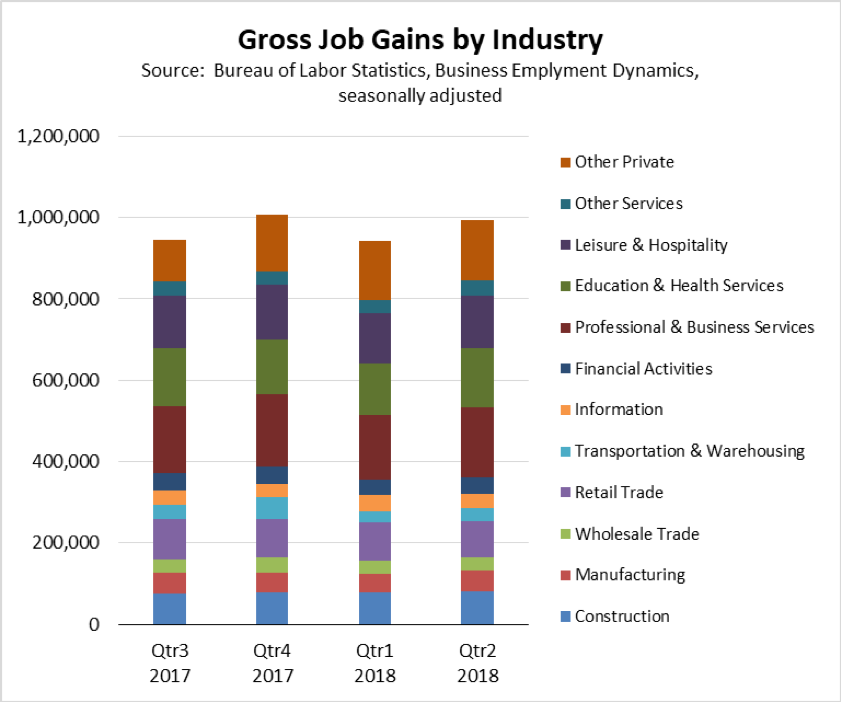 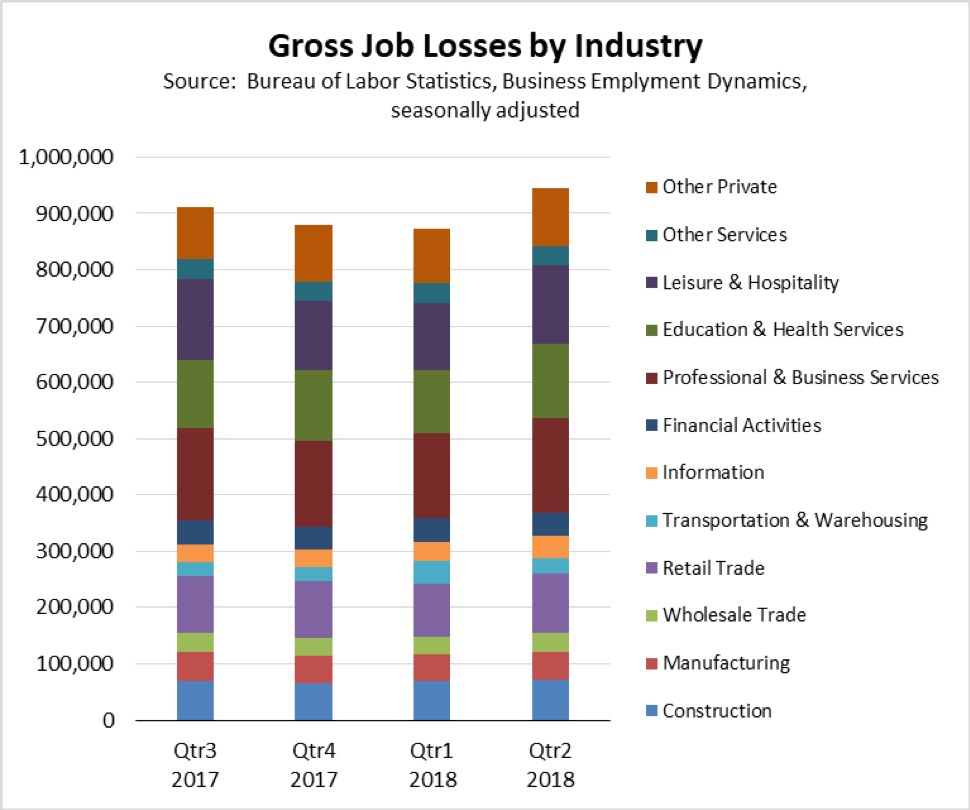 Openings and closings, however, do not cover the permanent movement of establishments into and out of the California economy. Both categories include a substantial element composed of temporary establishments, for example pop-up Christmas stores, summer food stands or farmers markets, and temporary insurance claims centers following disasters. Establishment formations and permanent closures are instead captured in the births and deaths data, which identify such establishments based on no filings within a prior multi-quarter period. This data identifies formation of new, ongoing firms and firm establishments as well as those that have been closed either as a result of movement to other states or permanent closure for business reasons.

This data is shown in the following tables for the related employment, expressed as the rate of births and deaths over the total employment base. While California is often touted as an innovator based on its growth of new businesses and industries, that dynamism as measured across the full economy is just slightly above the US average. Moreover, births are counterbalanced by a slightly higher rate of employment losses associated with establishment deaths as establishments are closed or moved out of the state.

Moreover, the California birth rate as with the national rate has declined since the 1990s. Excluding the volatility around the Dot.Com Bust, establishment openings contributed a quarterly average of 1.4% to the jobs base through the beginning of the century. Since 2008, the rate has averaged only 0.9%. And while the California results have been more volatile, the net rate (births minus deaths) has begun to approach the US level overall, with both the California and US averages at 0.1% per quarter since 2011. 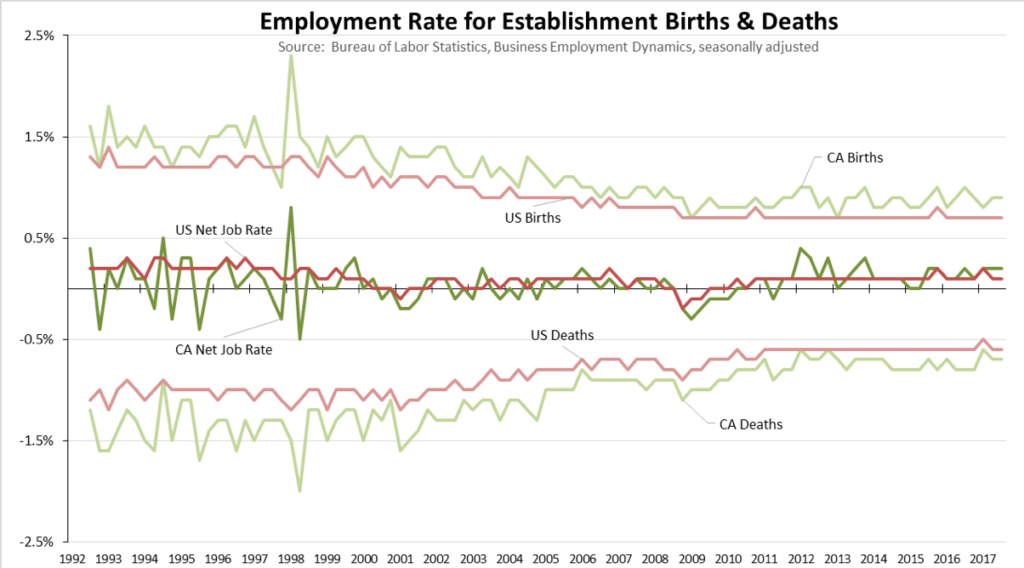