The Labor Force data for May 2016 (seasonally adjusted; California preliminary) is shown below, along with the change from the prior month:

The related not seasonally adjusted numbers (California preliminary), with the change from May 2015:

Total US employment saw a seasonally adjusted increase of only 26,000, while the number of unemployed decreased by 484,000. The US unemployment rate dropped from 5.0% in April to 4.7% in May, again primarily due to shrinkage in the total labor force.

The generally reported unemployment rate is only one of 6 unemployment measures tracked by the Bureau of Labor Statistics. These alternative rates vary from very narrowly defined measures, to broader accounting that considers persons who remain only marginally attached to the labor force:

Looking at U-6, the most recently reported rate for California was 12.0% (4-quarter moving average) compared to a US average of 10.1%. The California rate was the 4th highest among the states, which ranged from 5.3% in North Dakota to 13.4% in Nevada. 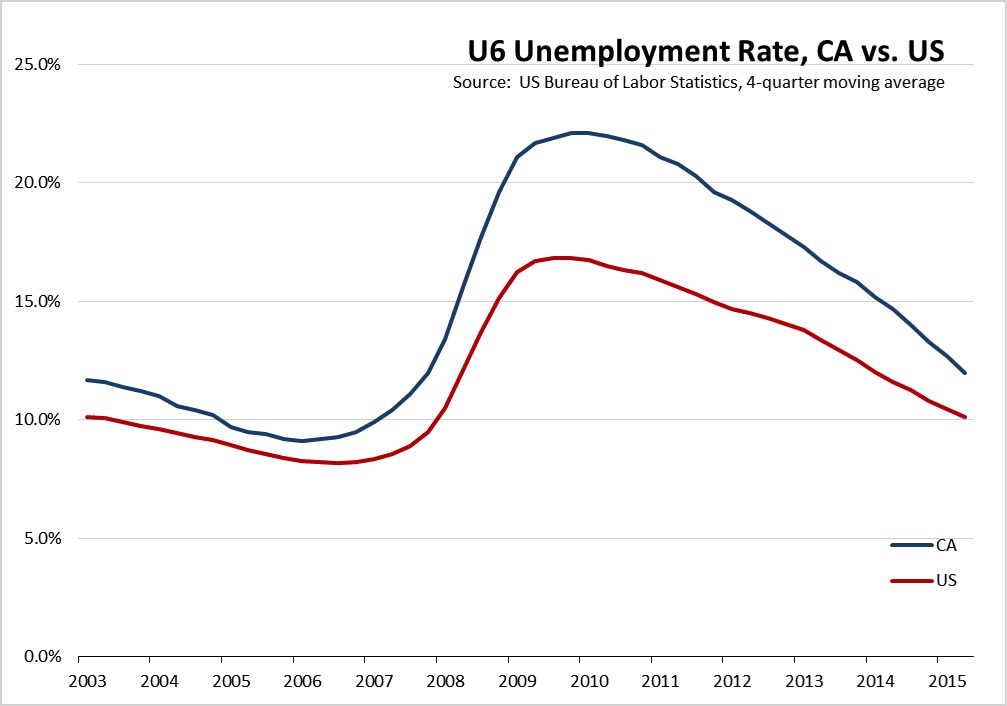 Change in Employment, May 2015 – May 2016
Source: US Bureau of Labor Statistics, Seasonally Adjusted

Between May 2015 and May 2016, Bureau of Labor Statistics (BLS) data shows the total number of employed in California increased by 337,448 (seasonally adjusted), or 14.8% of the total net employment gains in this period for the US. Measured by percentage change in employment over the year, California was 26th highest. Adjusted for population, California ranked 27th. While California remains the leading state when measured by total change in employment, the recent data revisions continue to show a marked drop when ranked by performance relative to the size of the state’s economy and population.

EDD reported that between April and May 2016, seasonally adjusted nonfarm payroll jobs increased by 15,200. April’s gains were revised upwards to 70,000 from the previously reported gain of 59,600.

Looking at the not seasonally adjusted numbers, hiring saw increases in all but 4 industries. The change in total payroll jobs from April 2016 saw the largest increases in Farm (55,600) as seasonal hiring continued to increase, Health Care & Social Assistance (13,900), and Administrative & Support & Waste Services (12,700). Declines were in Management of Companies & Enterprises (-500), Professional, Scientific & Technical Services (-600), Information (-3,400), and Educational Services (-4,500) as schools began to enter the summer vacation period.

By total number of new jobs, California had the highest increase in seasonally adjusted nonfarm jobs among the states from May 2014 to May 2015, at 440,300 or 18.4% of the US net increase. By percentage growth in jobs, California was 8th highest, and by population adjusted jobs growth, 10th highest.

Change in Nonfarm Jobs (seasonally adjusted), May 2015 – May 2016
Source: US Bureau of Labor Statistics

Unemployment rates (all data is not seasonally adjusted) continue to vary widely across the state, ranging from 3.4% in the Bay Area to more than double at 8.6% in the Central Valley. 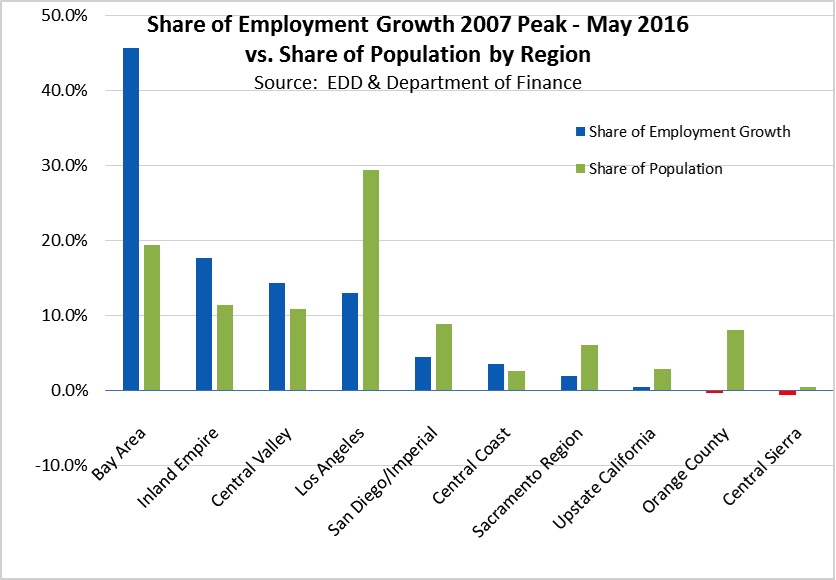 Manufacturing Remains Leading Source of Employment for Immigrants to California

Labor force availability is an emerging challenge to many developed economies—including many states in the Northeast and Upper Midwest—stemming from demographic shifts due to aging populations combined with lower birth rates.  California, on the other hand, has long benefited from being a prime destination for immigration, in the past through immigration from other states and ongoing through immigration from other nations.  This situation has provided a continuous flow of new labor force entrants, at times with the skills in short supply within the existing labor force and lacking under development within the state’s school systems.

The significance of this labor force factor, however, varies widely across California’s industries.  Through an analysis of the Current Population Survey data, the following figure shows the relative distribution by industry for workers by nativity, based on their reported main job.  The data compares workers who are US citizens by birth to workers who are foreign born, including both foreign born who are citizens by naturalization and those who have not yet become citizens.

As indicated, Manufacturing is the dominant source of employment for California’s immigrant population.  In absolute numbers, it is by far the largest, accounting for over 800,000 workers.  In relative terms, immigrants constitute 45.7% of all workers within Manufacturing, the third highest concentration behind the considerably smaller total number of workers found in Private Household Workers (64.9%) and Agriculture (58.3%).  The Manufacturing concentration ratio has also been relatively stable, ranging from 45.8% in 2004 to 49.0% in 2008.  Government (Public Administration), in contrast, reports far fewer both in terms of total numbers and the second lowest concentration ratio at only 16.4%.

Historically, manufacturing has played a key role in upward economic mobility in particular for blue collar workers, and these results indicate it continues to perform this function in a significant way for California’s immigrant population.  In the most recent 4-quarter average, Manufacturing paid $82,900 annually in wages, compared to only $33,900 for the second largest (Retail Trade) and $21,400 for the fourth largest (Accommodation & Food Services) sources of jobs for the immigrant population in 2015. 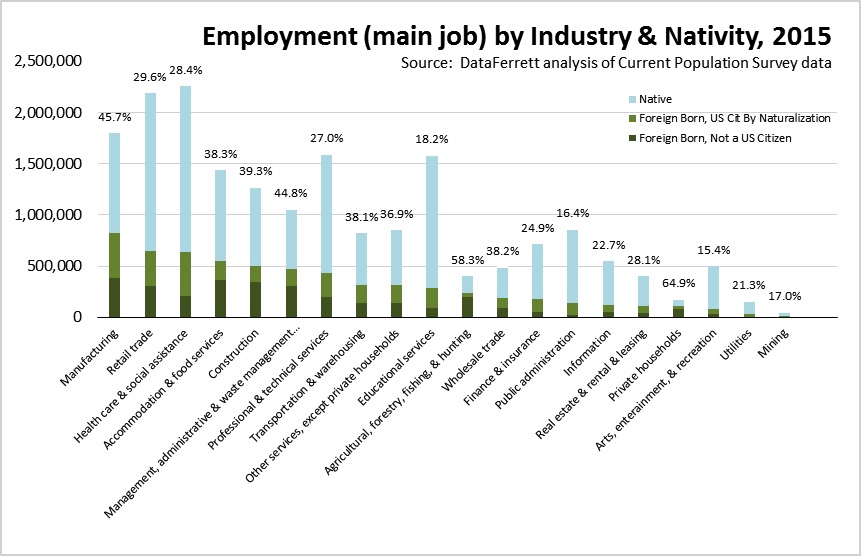 Manufacturing’s ability to continue providing these gateway opportunities for future immigrants, however, remains under challenge.  The continuing regulatory barriers to employment flexibility, increasing industrial energy prices stemming from the state’s energy policies, high tax rates both for corporations and even higher for pass-through business forms, increasing regulatory burdens, and declining skills training in the state’s schools represent ongoing competitiveness challenges that are reflected in declining employment levels overall in this industry.  Overall, Manufacturing remains nearly 200,000 employees below the pre-recession levels.