The Labor Force data for May 2018 (seasonally adjusted; California preliminary) is shown below, along with the change from the prior month:

The related not seasonally adjusted numbers (California preliminary), with the change from May 2017:

California Employment Development Department’s (EDD) latest data shows on a seasonally adjusted basis, total employment edged down 7,000 from April, while the number of unemployed dropped by 7,400. The labor force eased by 14,400.

California’s seasonally adjusted unemployment rate remained at 4.2%, the lowest level in the current data series that began in 1976, as the labor force continued to ease downwards for the third month in a row. California tied with Georgia for the 20th highest unemployment rate among the states. The unadjusted rate dropped from 4.4% in May 2017 to 3.7%. Contraction in the labor force was a key element in reaching the May low.

Total US employment saw a seasonally adjusted gain of 293,000 from April, while the number of unemployed dropped by 281,000. The national unemployment rate dipped to 3.8%, matching the record low in the current data series from April 2000. The national labor force remained essentially level with a gain of 12,000.

California’s participation rate (seasonally adjusted) in May dipped 0.1 to 62.0%, while the US rate dipped by the same amount to 62.7%. The California rate is now only 0.1 percentage points above the revised series low from 2015.

Considered by age, the prime working age groups in California (age 25-54 and 55-64) remain somewhat below their previous highs since 2000, with a continued decline in the youth participation rate. These trends, in particular, have long-term implications for income distributions in the state, as most studies indicate that work skills developed through early employment are correlated with long-term earnings potential. In contrast to the younger groups, persons 65 and older show a higher labor force participation rate compared to the prior low at the beginning of this period.

Change in Employment, May 2017 – May 2018
Source: US Bureau of Labor Statistics, Seasonally Adjusted

Between May 2017 and May 2018, Bureau of Labor Statistics (BLS) data shows the total number of employed in California increased by 199,900 (seasonally adjusted), or 7.7% of the total net employment gains in this period for the US. Based on the total numbers, California remained in 2nd place behind Texas (which has a civilian working age population only 69% as large as California’s) but ahead of Florida’s (55% as large) gains at 158,900. Measured by percentage change in employment over the year, California dropped to 26th highest. Adjusted for working age population, California dropped to 27th.

EDD reported that between April and May 2018, seasonally adjusted nonfarm wage and salary jobs rose 5,500. April’s results were revised to a 25,600 gain from the previously reported 39,300.

Change in Nonfarm Jobs (seasonally adjusted), May 2017 – May 2018
Source:US Bureau of Labor Statistics

Comparing the number of jobs by industry in May 2018 (not seasonally adjusted), 4 industries had employment below the 2007 pre-recession levels. The highest gain industries were led by lower wage Food Services, Health Care (with a relatively higher mix of lower and higher wage occupations), lower wage Social Assistance, and higher wage Professional, Scientific & Technical Services. Of the lagging industries, three—Manufacturing, Mining & Logging, and Construction—are blue collar middle class wage industries, while the higher wage Finance & Insurance also remained in the minus column. Construction has overall improved but still remains 63,800 below the 2007 peak, and 110,300 (11%) below the previous high in 2006.

The following chart illustrates the trend for total wage and salary jobs by general wage level, according to the industry wage classification used previously in other Center analyses of this issue. As indicated, nearly half (47%) of net jobs growth since the recession has been in the lower wage industries. For the 12 months ending May 2018, lower wage industries accounted for about a quarter (24%) of new jobs, while middle class-blue collar jobs produced just over a quarter (27%) as Construction levels remain above prior years. 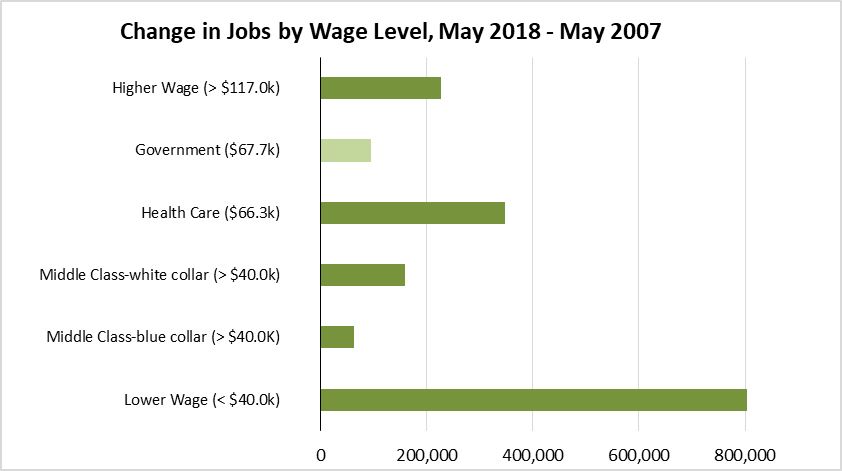 The level of unemployment rates (all data is not seasonally adjusted) continues to vary widely across the state, ranging from 2.4% in the Bay Area to nearly three times as large at 6.9% in the Central Valley.

Containing 19.4% of the state’s population, the Bay Area was responsible for 39.5% of the net growth in employment since the pre-recession peaks in 2007. Los Angeles Region, containing 29.2% of the population, accounted for the second largest share at 20.3%. Inland Empire is the only other region—at a growing margin—continuing to show employment gains above their population share. 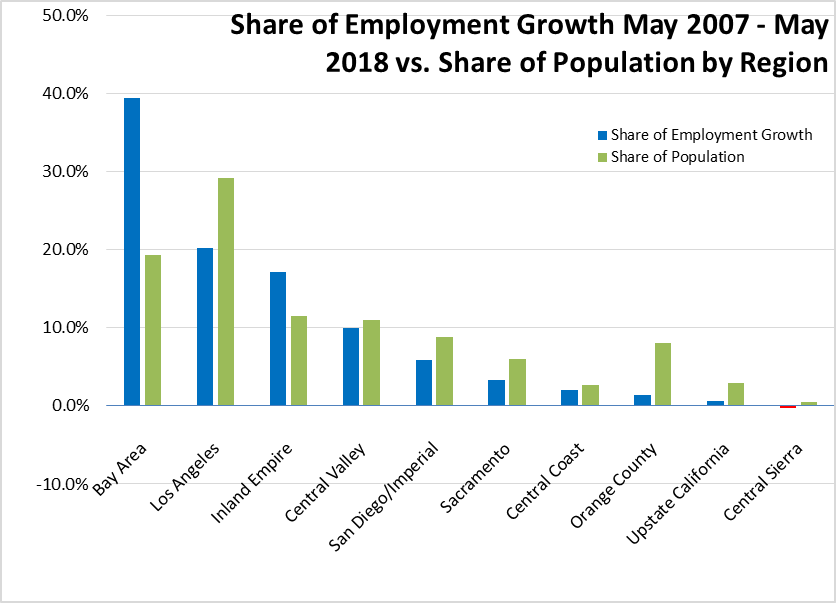