The Labor Force data for November 2015 (seasonally adjusted; California preliminary) is shown below, along with the change from the prior month:

The related not seasonally adjusted numbers (California preliminary), with the change from November 2014:

Total US employment saw a seasonally adjusted increase of 244,000, while the number of unemployed increased marginally by 29,000.

On a seasonally adjusted basis, California’s employment growth was half the national rate, while California experienced a decline in the number of unemployed as compared to the national increase.

California’s seasonally adjusted labor force participation rate continues to drop below the previous lows recorded in 1976.  This latest decline trend since February 2013 has been a key factor in the improvement in the state’s unemployment rate, as persons have left the labor force and are no longer counted among the unemployed.  As indicated in previous months’ reports, the continuing decline in labor force participation is a structural change producing comparatively fewer income earners per household, and thereby lower total income for some households that in turn reduce housing affordability and increase the relative incidence of cost-of-living adjusted poverty.  Continuing declines in the number of income earners relative to the economy further has long term implications to the stability of public revenues and demand on public services.

EDD reported that between October and November 2015, seasonally adjusted nonfarm payroll jobs increased by 5,500.  The October job gains were revised downwards slightly to 40,600 from the preliminary estimate of 41,200.

By total number of new jobs, California had the highest increase in seasonally adjusted nonfarm jobs among the states from November 2014 to November 2015, at 417,100 or 15.8% of the US net increase.  By percentage growth in jobs, California dropped from 6th to 7th highest, and by population adjusted jobs growth, went from 5th to 10th highest.

Comparing the number of jobs by industry in November 2015 (not seasonally adjusted), the number of industries remaining below the 2007 pre-recession levels finally dropped to only 4 as holiday season hiring lifted Retail Trade into positive numbers and growth in Government hiring remained strong.  However, the negative balance for all 4 industries below the 2007 line grew in November, and Mining & Logging (+1,900) which includes oil and gas employment and Information (+2,500) only remained slightly in positive territory.  In the highest gain industries, Accommodation & Food Services for the first month moved into 2nd place overall and surpassed Individual & Family Services as the highest growth lower wage industry.

Six Counties Remain in Double-Digit Unemployment, 12 are 5% or Less 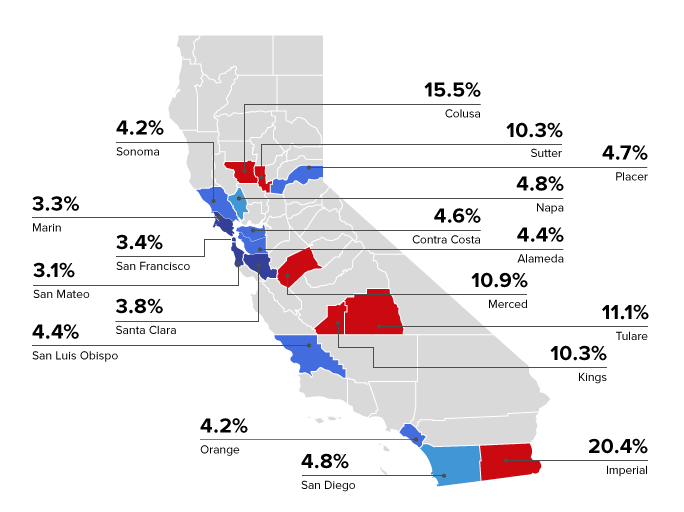 Unemployment rates (all data is not seasonally adjusted) continue to vary widely across the state, ranging from 4.0% in the Bay Area to more than double at 9.6% in the Central Valley.

Ratio of Highest to Lowest Rate: 2.38

Ratio of Highest to Lowest Rate: 6.58 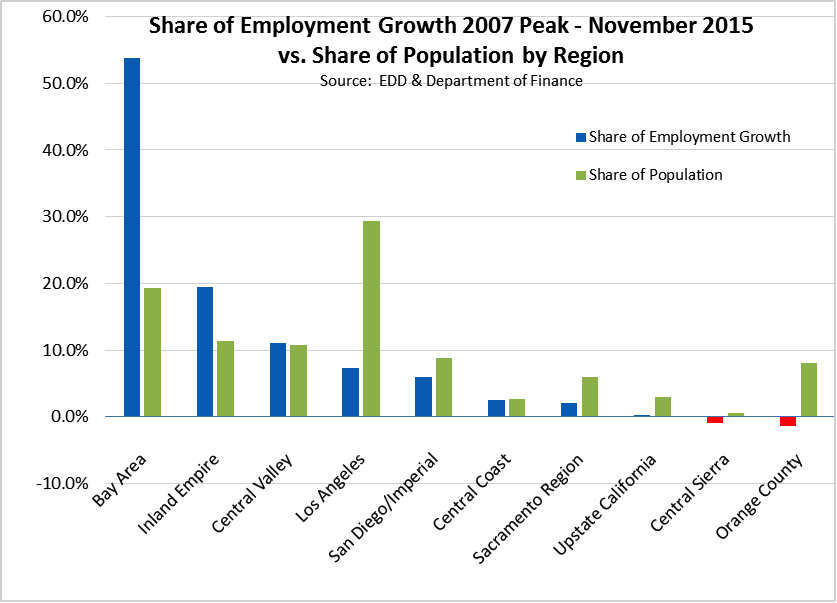