EDD reported total employment (seasonally adjusted; November preliminary) was up 53,700 from the revised October numbers, while the number of unemployed dipped 3,700.  Unemployment rate remained at the series low of 3.9%.  The unadjusted rate was down 0.2 point from the year earlier to 3.5%, matching May’s rate level as the lowest in the current series stretching back to 1976.

California again had the 15th highest unemployment rate among the states.

Total US employment saw a seasonally adjusted gain of 83,000, with the number of unemployed down by 44,000.  The unemployment rate dipped to 3.5%, matching September’s rate as the lowest since 1969.

The total number of persons employed (seasonally adjusted) over the 12 months ending in November grew by only 22,700.  California rose to tie with New Mexico for the 24th highest rank, with Texas leading with an additional 255,900 persons employed over this period, and Florida in second place with a gain of 220,900.

Adjusted to account for differences in the size of each state economy, California grew by only 0.1%, below the average for the rest of the US with a gain of 1.3%.  Ranked among the states, California’s growth rate also edged up to 44th place, while Alabama led with 3.9% growth.

Adjusting for population size, California remained 14th among the states, with a 12-month jobs growth rate of 1.9% compared to the rest of the US at 1.4%.

Gains in payroll jobs were again led by Health Care ($68.1k average annual wages), Social Assistance ($19.8k), and Government ($70.1k).  All three industries are heavily affected either directly or indirectly by the level of state spending.

Construction is the exception for middle class wage, blue collar industries, with job levels continuing to be within the 2007 levels.  Jobs, however, remain 19,500 (6.5%) below the all-time peak reached the year before in 2006.  Residential Building Construction still accounts for the bulk of the remaining gap, with the November 2019 job levels 26,500 below the all-time peak in 2006. 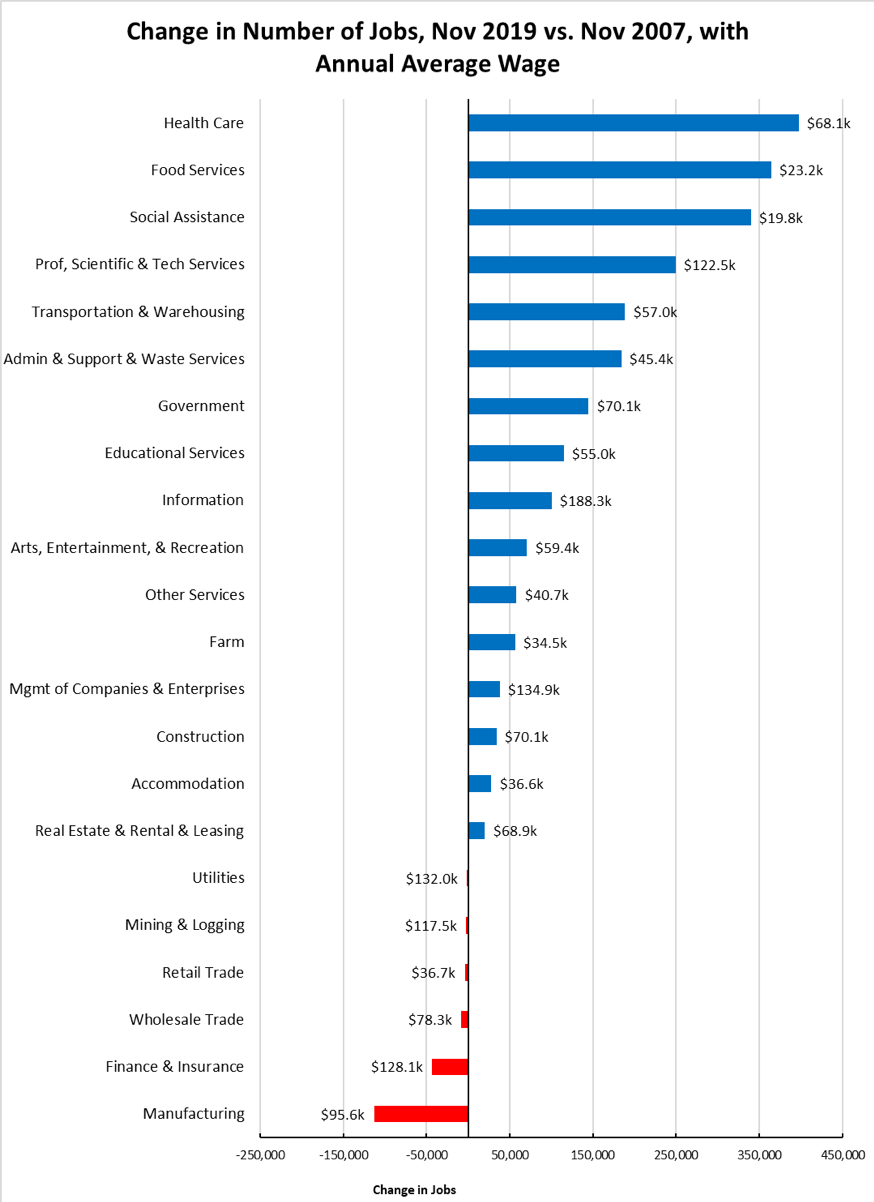 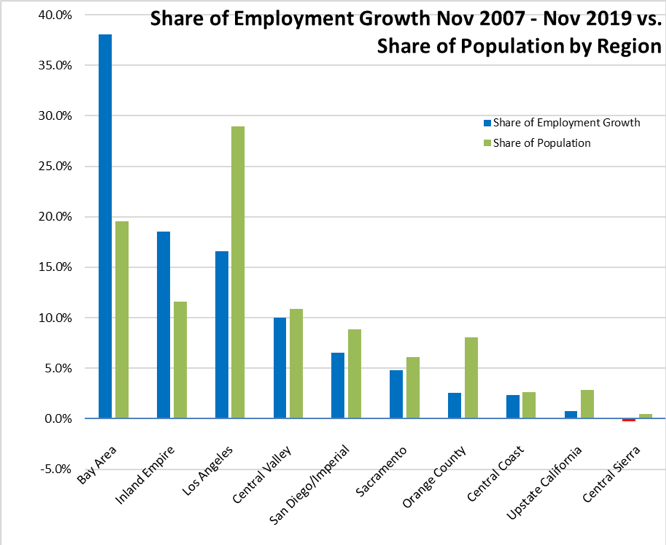 Of the 20 Metropolitan Statistical Areas (MSAs) with the worst unemployment rates in October 2018, 8 are in California, including El Centro MSA (Imperial County) which continues with Great Depression-era levels of unemployment that are 11 times worse than in San Mateo, the county with the lowest unemployment rate.

Chart of the Month: County GDP

Gross Domestic Product (GDP) previously was only available at the state and MSA level.  Recently, US Bureau of Economic Analysis released the first estimates in their new series providing this information on a county level.

Looking first at the urban coastal regions, the Dot.Com recession at the beginning of this period along with its attendant plunge in state revenues was largely concentrated in the Bay Area.  The more broadly based industry mix in the rest of the state saw less of an effect.  Growth in the period following again was more balanced throughout the state, but with Orange County leading into the Great Recession period.  Actual recession was short in both of the state’s two largest regions, but recovery was much slower within Los Angeles.  The Bay Area since has moved well ahead of the other coastal centers. 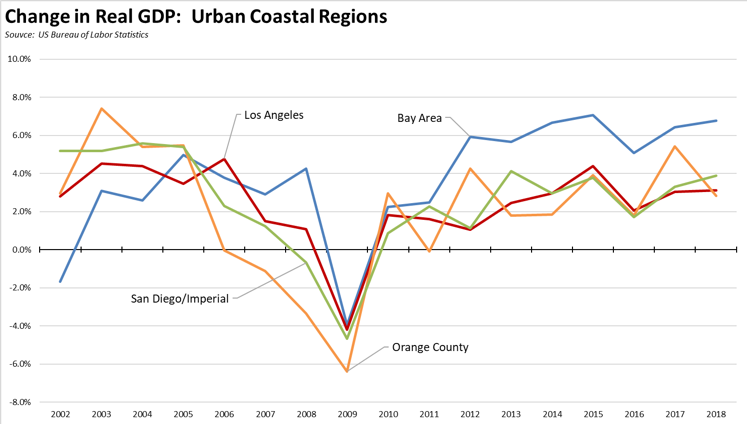 The interior regions in general show more consistent GDP changes within this period, with the exception of the Central Coast which illustrates more variable growth as a result of this status along with its proximity to the Bay Area. 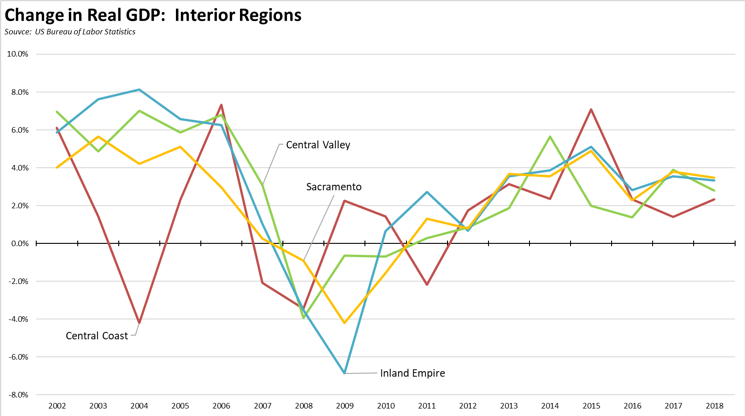 Finally, the two rural regions show more variable, although in general, lower overall growth in this period.  These trends however also reflect that these counties are considerably smaller, and growth from year to year is more immediately affected by changes in major employers, water availability and agricultural prices, and influxes of primary and secondary home buyers. 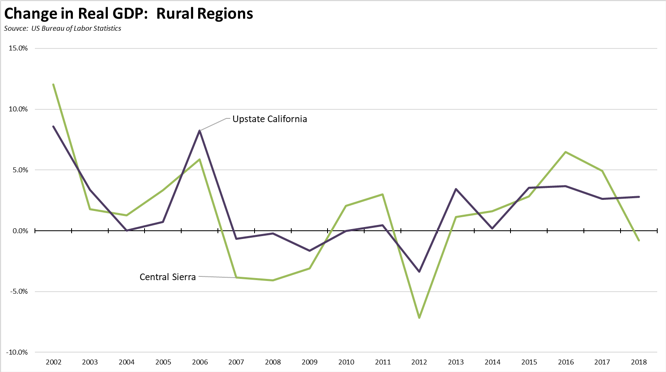 The importance of the Bay Area to California’s economic performance is further shown by its increasing contribution to total state real GDP.  With about 19% of total state population in this period, this region jumped from a growth contribution near its population share at the beginning of this period to more than twice as much in the recovery period. 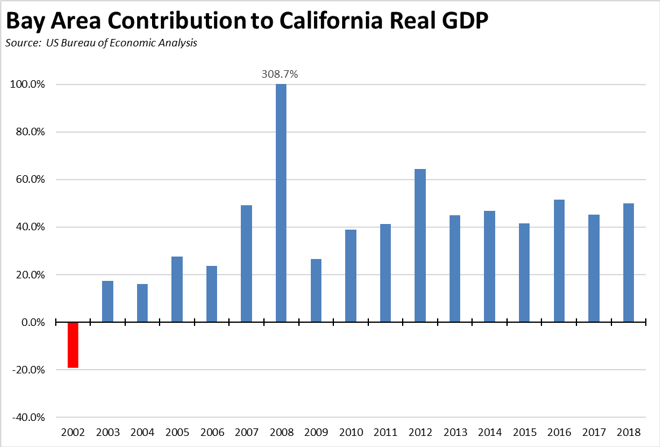 The consequent effect on the state’s relative economic performance is shown in the following table.  Regardless of the period measured, the total numbers show California has outperformed the rest of the US.  This situation, however, has followed from the outsized growth in the Bay Area, while the rest of the state has done little better than the other states combined.  The current run of record state revenues similarly has been dependent on this disparate growth pattern as well, with the results at the beginning of this period illustrating the risks of putting all the budget eggs into one basket.