The Labor Force data for October 2015 (seasonally adjusted; California preliminary) is shown below, along with the change from the prior month:

The related not seasonally adjusted numbers (California preliminary), with the change from October 2014:

Total US employment saw a seasonally adjusted increase of 320,000, while the number of unemployed declined slightly by 7,000.

California’s improved unemployment rate in the seasonally adjusted series continues to benefit from a drop in the labor force, a net decrease of 11,000 from the prior month.

Between October 2014 and October 2015, Bureau of Labor Statistics (BLS) data shows the total number of employed in California increased by 381,218 (seasonally adjusted), or 20.5% of the total net employment gains in this period for the US.  Measured by percentage change in employment over the year, California declined from 13th to 14th highest.  Adjusted for population, California dropped from 14th to 16th.

California’s participation rate (seasonally adjusted) declined another 0.1% to 62.1%.  The comparable US rate remained steady at 62.4%.

California’s seasonally adjusted labor force participation rate continues to drop below the previous lows recorded in 1976. This latest decline trend since February 2013 has been a key factor in the improvement in the state’s unemployment rate, as persons have left the labor force and are no longer counted among the unemployed. As indicated in previous months’ reports, the continuing decline in labor force participation is a structural change producing comparatively fewer income earners per household. As some households thereby face lower total income, the ability to afford housing is reduced, and the relative incidence of cost-of-living adjusted poverty is increased. Continuing declines in the number of income earners relative to the economy further has long term implications to the stability of public revenues and demand on public services.

EDD reported that between September and October 2015, seasonally adjusted nonfarm payroll jobs increased by 41,200.  The September job gains were revised upwards to 21,100 from the preliminary estimate of 8,200.

By total number of new jobs, California had the highest increase in seasonally adjusted nonfarm jobs among the states from October 2014 to October 2015, at 463,000 or 16.5% of the US net increase.  By percentage growth in jobs, California remained at 6th highest, and by population adjusted jobs growth, went from 8th to 5th highest.

Comparing the number of jobs by industry in October 2015 (not seasonally adjusted), 6 industries remain below the 2007 pre-recession levels.  Net job growth continues to be dominated by two higher wage and the two lowest wage industries.

Three Counties in Double-Digit Unemployment, One-Quarter are 5% or Less 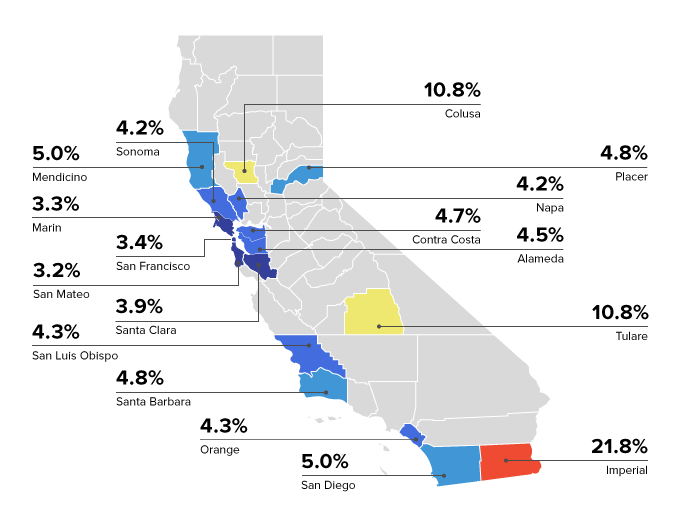 The highest ranked California MSA—Napa MSA—tied with 8 other MSAs nationally at rank 63 with an unemployment rate of 3.6%.

Unemployment rates (all data is not seasonally adjusted) continue to vary widely across the state, ranging from 4.1% in the Bay Area to more than double at 9.0% in the Central Valley.

Ratio of Highest to Lowest Rate: 2.20

Ratio of Highest to Lowest Rate: 6.81 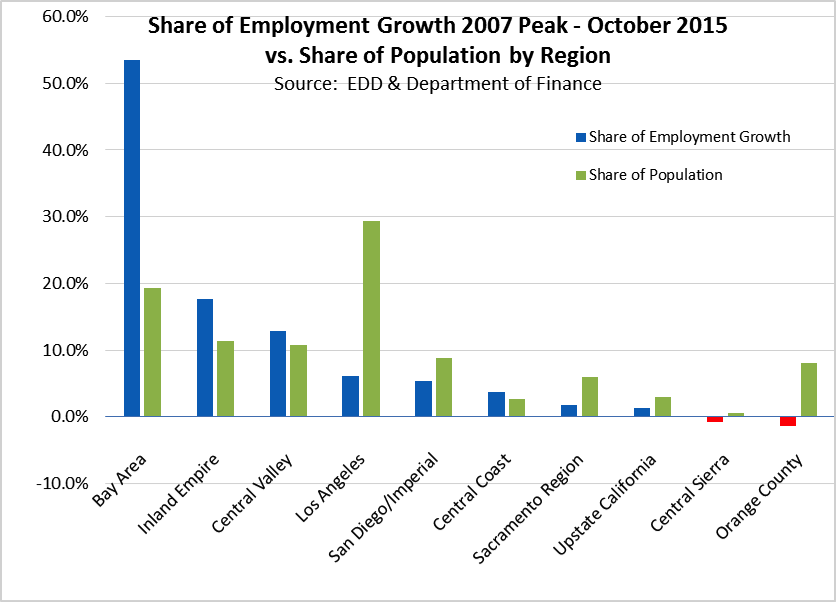 More importantly, rather than a two-tier economic recovery, the graph below suggests that when ranked by income levels, the state instead has evolved into three distinct areas.  While the state began the 1990s with three income groupings of lower, middle, and higher per capita incomes, the Bay Area has leapt ahead into a category by itself.  The Bay Area is now at nearly 40% higher than the state average; 5 regions are grouped at plus or minus 10% of the state average (Orange County, San Diego/Imperial, Los Angeles, Central Coast, Sacramento); while the remaining 4 lie up to one-third below. 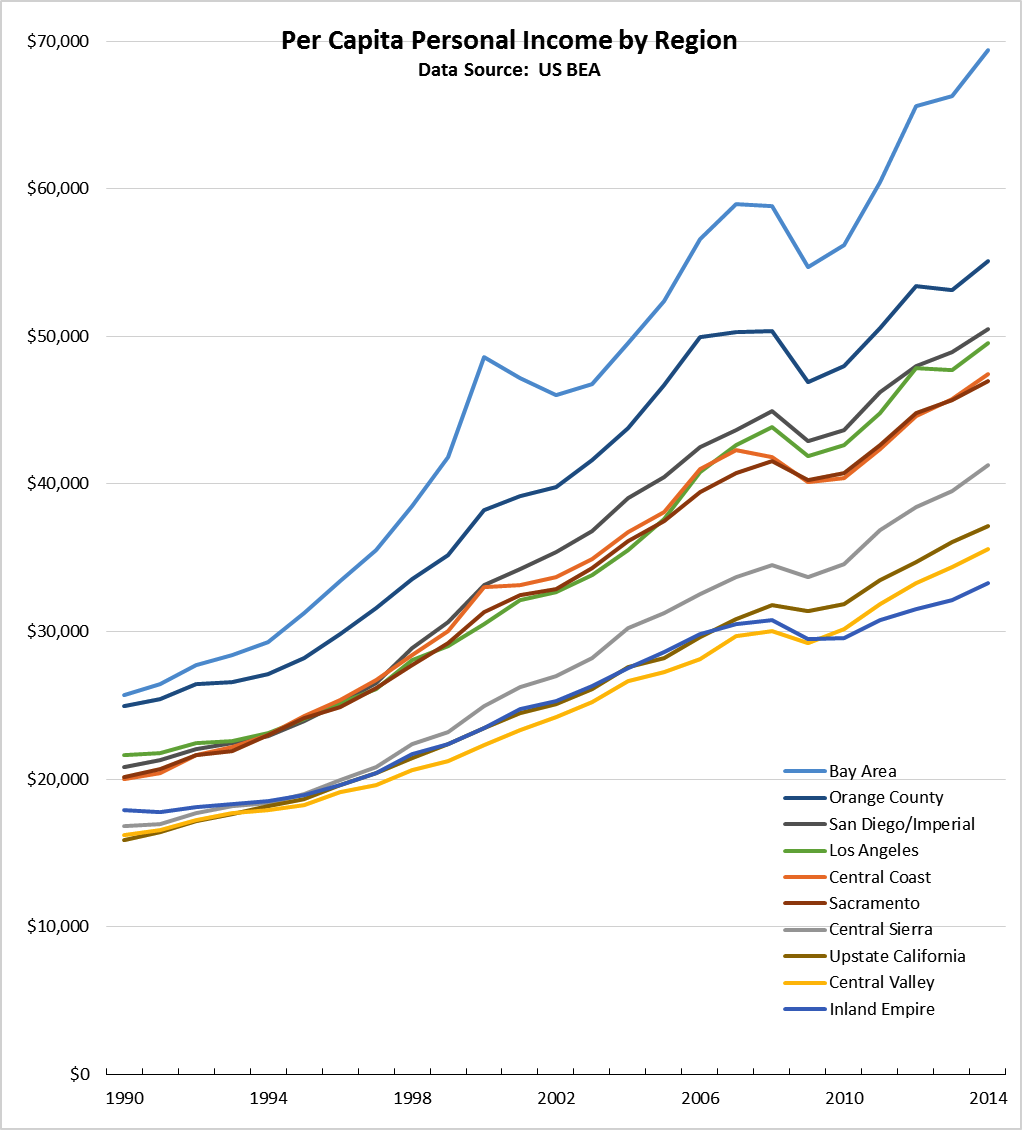 The data revisions from 1969 in general produced lower numbers for both total and per capita personal income for most counties and regions.  The primary exceptions were the Bay Area and Los Angeles Region which saw upward adjustments in most years.

Additional detail for the state, counties, and regions have been updated to the Center’s Economic Indicators section.  Personal income estimates for the Legislative Districts will be updated after the income factors from the American Community Survey become available next month.