The Labor Force data for October 2016 (seasonally adjusted; California preliminary) is shown below, along with the change from the prior month:

The related not seasonally adjusted numbers (California preliminary), with the change from October 2015:

California Employment Development Department’s (EDD) latest release shows on a seasonally adjusted basis, total employment grew by 90,900 from September, while the number of unemployed essentially remained level with a decline of only 1,300.  California’s seasonally adjusted unemployment rate remained steady from the prior three months at 5.5%.  California tied with Nevada and Rhode Island for the 10th highest unemployment rate among the states.  The unadjusted rate dropped from 5.8% in October 2015 to 5.3%.

Total US employment saw a seasonally adjusted decrease of 43,000 from September, while the number of unemployed dropped by 152,000.  The national unemployment rate eased marginally to 4.9%.

California’s participation rate (seasonally adjusted) rose 0.2 point to 62.8% in October, matching for the first time since a brief period in 2010, the comparable US average which eased marginally by 0.1 point to 62.8%.  The California participation rate has now shown improvement over the past four months, but has yet to rebound to levels that would constitute recovery.  The overall rate still remains near the previous lows from 1976, and well below the average pre-recession level of 65.6% in 2007.

Between October 2015 and October 2016, Bureau of Labor Statistics (BLS) data shows the total number of employed in California increased by 517,200 (seasonally adjusted), or 17.1% of the total net employment gains in this period for the US.  Measured by percentage change in employment over the year, California rose to 10th highest.  Adjusted for population, California also rose to 10th.

EDD reported that between September and October 2016, seasonally adjusted nonfarm wage and salary jobs grew 31,200 in October.  September’s gains were revised upwards to 36,000 from the previously reported gain of 30,000 [note:  this is a correction from the Friday email].

Looking at the not seasonally adjusted numbers, hiring saw increases in all but 2 industries.  The change in total payroll jobs from October 2015 saw the largest increases in Health Care & Social Assistance (63,900), Professional, Scientific & Professional Services (56,000), and Government (50,400).  Declines were in Manufacturing (-15,000) and Mining & Logging (-3,900).

By total number of new jobs, California had the highest increase in seasonally adjusted nonfarm jobs among the states from October 2015 to October 2016, at 389,500 or 16.5% of the US net increase.  By percentage growth in jobs, California rose to 8th highest, and by population adjusted jobs growth, 12th highest.

The ability of the top 3 drivers of California’s jobs growth to continue performing in this way now faces some uncertainty as a result of changes in state and federal policy:

Unemployment rates (all data is not seasonally adjusted) continue to vary widely across the state, ranging from 3.8% in the Bay Area to more than double at 8.8% in the Central Valley. 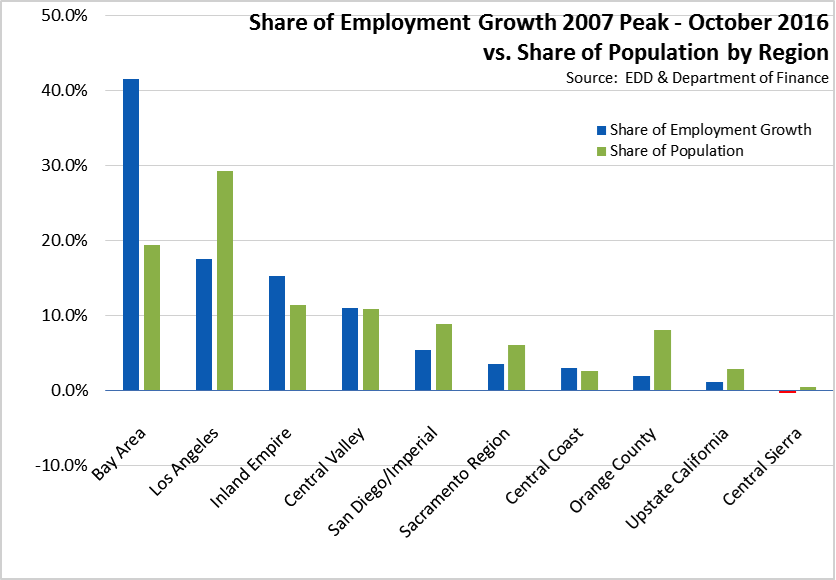 By the technical standards applied in the 2000s, many commenters—including for the national situation, the Federal Reserve—now suggest California and the US have achieved full employment.  California’s seasonally adjusted unemployment rate has been at 5.5% or below since February.  The US average has been around 5.0%, while wage levels have seen some moderate growth.

But while California may be meeting the technical definition, it is at a substantially lower equilibrium level than prior to the recession.  Significant and growing barriers continue to add to structural unemployment, many of which have been addressed in the Center’s reports.  A significant body of workers remain detached from the labor force, both for voluntary and involuntary reasons:

Recent jobs reports may suggest California has reached the point of full employment, but it is at a level that leaves far too much of the state without the jobs and income needed to cope with the growing costs of living.

The most recent data from California Homebuilding Foundation shows the number of housing units covered by new construction permits in 2016:Q3 was down 1.0% from 2015:Q3.  Housing permits are on track to remain below 100,000 for the year, less than half of the level required to keep up with population growth and adding to California’s growing housing supply deficit. 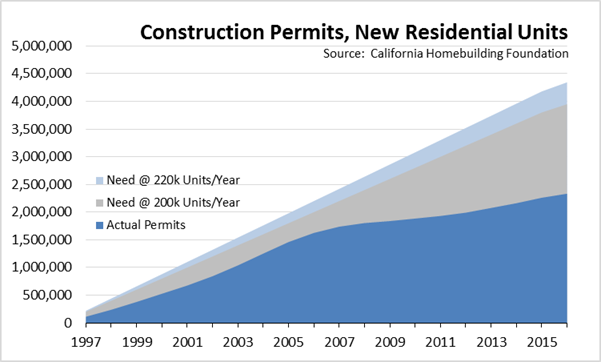 By region, housing permits were up in Los Angeles and less so in 4 other regions.  All regions remained below levels seen in the last “full supply” year of 2005. 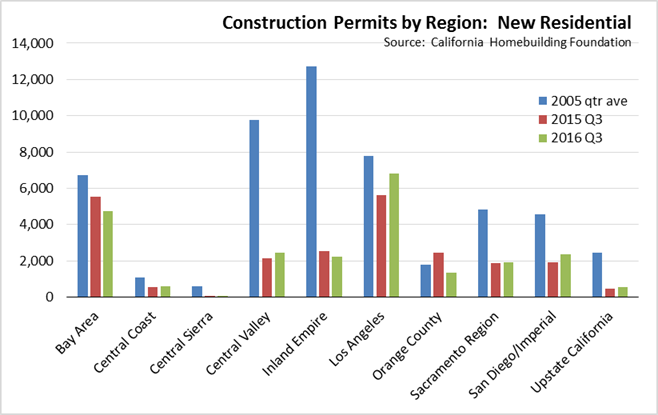 Data for additional geographic areas including counties and Congressional, Senate, and Assembly Districts is available in the Center’s Economic Indicators page.

The Economic Indicators have also been updated with the 2016:Q3 housing price data.  Overall, California average housing price was 60.6% above the US average.  By region, the price premium ranged from 133.6% higher in the Bay Area, to 29.6% lower in Upstate California. 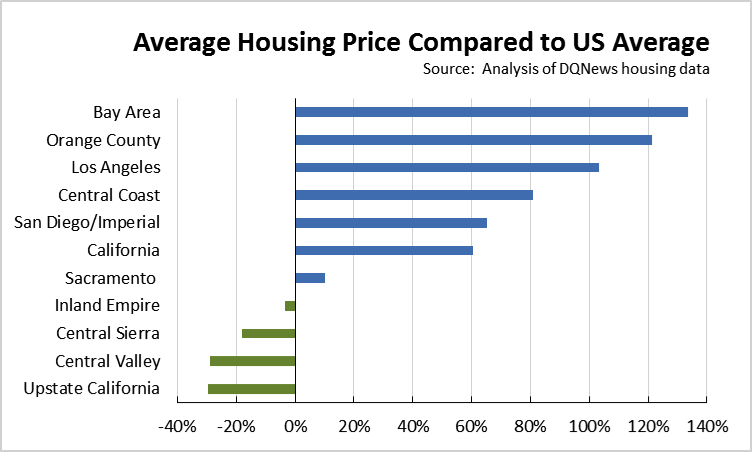 Data for additional geographic areas including counties and Congressional, Senate, and Assembly Districts is available in the Center’s Economic Indicators page.  Data for the 2nd and 3rd quarters are subject to revision as the underlying US data is revised in the next quarter.