The Center for Jobs and the Economy has released our initial analysis of the December Employment Report from the California Employment Development Department. For additional information and data about the California economy visit www.centerforjobs.org/ca.

The December numbers continued the trend from recent months.  Nonfarm job gains at 16,200 were positive but slowing, coming in at the second lowest for 2022 and representing only 7% of the total national gains of 223,000.  Employment declined 20,000, posting the fifth month in a row with a loss in the number of employed.  Compared to the February 2020 pre-pandemic peaks, California was 0.3% above that recovery measure for nonfarm jobs, but continued slipping to 1.6% below for employment. 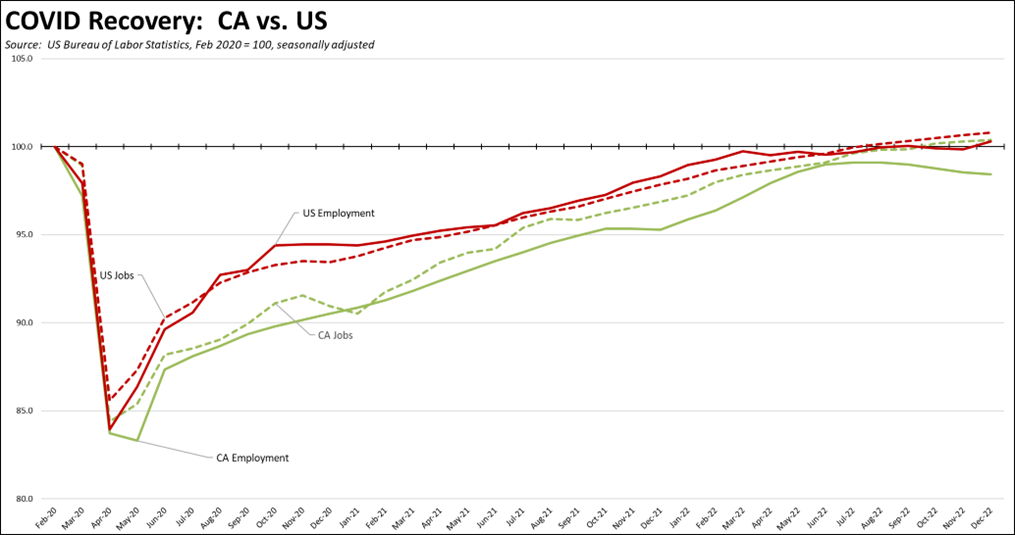 The national labor force revisions from 2018 on show relatively little change in the overall numbers, with the primary differences in general showing a shift in the employment numbers from the second half to the first half of the affected years due to changes in the seasonal adjustment factors.  The result was few changes in the unemployment rate in most of the revision period. 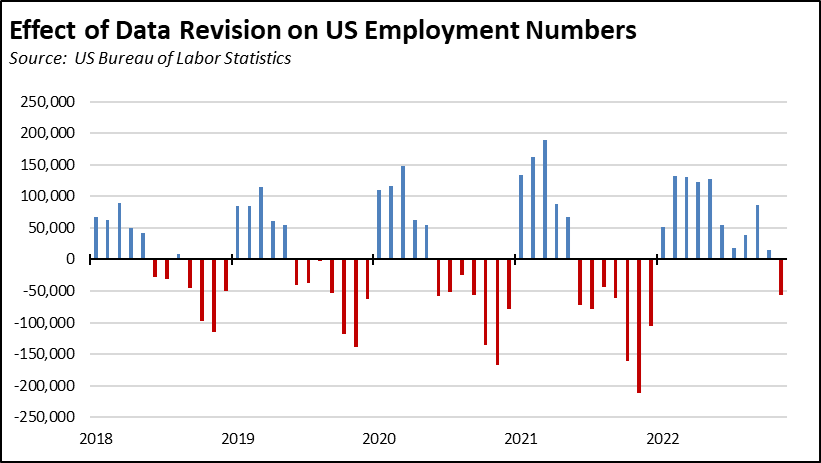 The changes in nonfarm job numbers are expected to be somewhat more significant, both due to the factors discussed in last month’s report along with extensive revisions in seasonal adjustment procedures and the industry classification system.

The December numbers show employment dropping for the fifth month in a row, posting a loss of 20,000 for the month and a cumulative loss of 128,000 since July.  Unemployment was little changed with a dip of 6,700.  The labor force was down 26,700.

Nonfarm wage and salary jobs were up 16,200, remaining above the pre-pandemic peak in February 2020 for the third month in a row.

Nonfarm jobs nationally were up 233,000, posting the sixth month in a row above of the pre-pandemic peak in February 2020.

California unfilled job openings at the end of November were 1.207 million, representing 1.5 job openings for every unemployed person that month.  Nationally, job openings were down slightly, dipping 0.5% to 10.5 million.

The number of counties with an unemployment rate at 10% or more remained at 2. The unadjusted rates ranged from 1.9% in San Mateo to 14.8% in Imperial.