The Labor Force data for September 2015 (seasonally adjusted; California preliminary) is shown below, along with the change from the prior month:

The related not seasonally adjusted numbers (California preliminary), with the change from September 2014;

Total US employment saw a seasonally adjusted increase of 236,000, while the number of unemployed dropped 114,000.

As on the national level, California’s improved unemployment rate stems primarily from a reduced labor force participation rate. The unadjusted numbers show a steep drop in the labor force by 125,000 from August 2015. Whether this is a statistical event or a continuation of the latest decline trend that began in February 2013, will be shown in the results from the coming months.

Between September 2014 and September 2015, Bureau of Labor Statistics (BLS) data shows the total number of employed in California increased by 399,259 (seasonally adjusted), or 18.2% of the total net employment gains in this period for the US. Measured by percentage change in employment over the year, California was 13th highest. Adjusted for population, California dropped one slot to 14th. While California remains above the US average in all three measures for overall employment growth, the last two measures which take into account the relative size of the states indicates that California continues to lie in the second quartile.

California’s seasonally adjusted labor force participation rate is now at its lowest point since 1976. This latest decline trend since February 2013 has been a key factor in the improvement in the state’s unemployment rate, as persons have left the labor force and are no longer counted among the unemployed. More critically, the continuing decline in labor force participation is a structural change producing comparatively fewer income earners per household, and thereby lower total income for some households that in turn reduce housing affordability and increase the relative incidence of cost-of-living adjusted poverty. Continuing declines in the number of income earners relative to the economy further has long term implications to the stability of public revenues and demand on public services.

EDD reported that between August and September 2015, seasonally adjusted nonfarm payroll jobs increased by 8,200. The August job gains were revised upwards to 42,000.

Looking at the not seasonally adjusted numbers, the change in nonfarm payroll jobs from August 2015 saw the largest increases in Government (71,600) and Educational Services (18,500) as schools continued staffing up for the academic year, Administrative & Support & Waste Services (14,800), Health Care & Social Services (7,300), and Farm (6,200). Biggest declines were in Accommodation & Food Service (-10,700), Professional, Scientific & Technical Services (-10,700), and Arts, Entertainment & Recreation (-8,200). Finance and Real Estate combined also were down -7,200. The industries were essentially split, with 9 improving and 10 declining for the month.

Comparing the number of jobs by industry in September 2015 (seasonally adjusted), 6 industries remain below the 2007 pre-recession levels. Note that from the not seasonally adjusted data, over half of the Health Care & Social Assistance net jobs shown in the chart are attributable to Individual & Family Services, the industry dominated by In-Home Supportive Services and paying only $14,700 average annual wages. Also note that the Government job numbers are influenced by the seasonal employment factors in education.

1 County Remains in Double-Digit Unemployment, One-third are 5% or Less 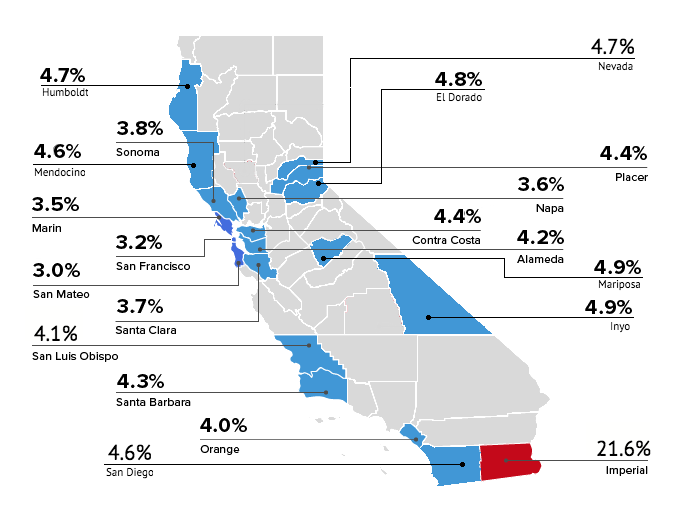 The highest ranked California MSA—San Jose-Sunnyvale-Santa Clara MSA—tied with 12 other MSAs nationally at rank 77 with an unemployment rate of 4.1%.

Unemployment rates (all data is not seasonally adjusted) continue to vary widely across the state, ranging from 3.8% in the Bay Area to more than double at 8.2% in the Central Valley.

Ratio of Highest to Lowest Rate: 2.16

Ratio of Highest to Lowest Rate: 7.20 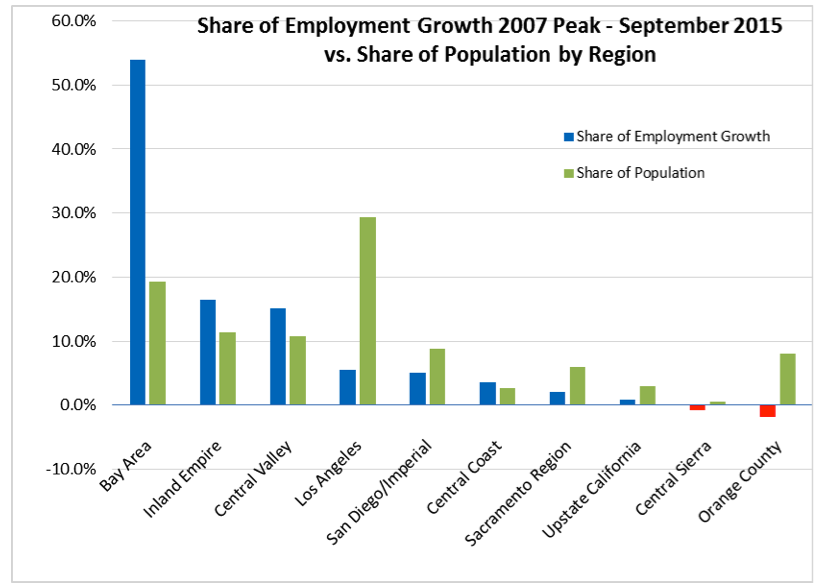