The Labor Force data for September 2016 (seasonally adjusted; California preliminary) is shown below, along with the change from the prior month:

The related not seasonally adjusted numbers (California preliminary), with the change from September 2015:

California Employment Development Department’s (EDD) latest release shows on a seasonally adjusted basis, total employment grew by 108,600 from August, while the number of unemployed grew by 9,200.  California’s seasonally adjusted unemployment rate remained steady from the prior two months at 5.5%.  California tied with Arizona, Illinois and Oregon for the 13th highest unemployment rate among the states.  The unadjusted rate dropped from 5.6% in September 2015 to 5.3%.

Total US employment saw a seasonally adjusted increase of 354,000 from August, while the number of unemployed increased by 90,000.  The national unemployment rate rose marginally to 5.0%.

California’s participation rate (seasonally adjusted) rose 0.4 point to 62.6% in September.  The comparable US rate rose marginally by 0.1 point to 62.9%.  The participation rate has now shown improvement over the past three months, but has yet to rebound to levels that would constitute recovery.  The overall rate still remains near the previous lows from 1976, and well below the average pre-recession level of 65.6% in 2007.

EDD reported that between August and September 2016, seasonally adjusted nonfarm wage and salary jobs grew 30,000 in September.  August’s gains were revised downwards to 48,400 from the previously reported gain of 63,100.

Looking at the not seasonally adjusted numbers, hiring saw increases in all but 2 industries.  The change in total payroll jobs from September 2015 saw the largest increases in Health Care & Social Services (65,100), Professional, Scientific & Professional Services (57,600), and Accommodation & Food Service (48,500).  Declines were in Manufacturing (-18,000) and Mining & Logging (-3,300).

Unemployment rates (all data is not seasonally adjusted) continue to vary widely across the state, ranging from 3.9% in the Bay Area to more than double at 8.4% in the Central Valley. 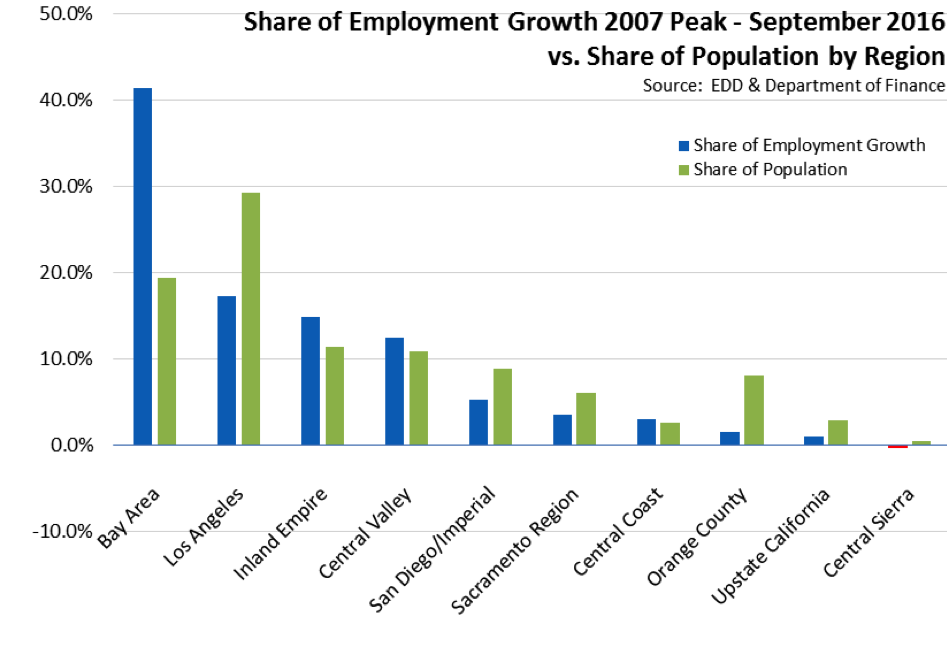 Average Wage and Compensation Growth in 2015

In regards to wages, the most recent release from Bureau of Labor Statistics shows real average hourly earnings for private nonfarm payrolls for the US in September 2016 up 1.0% from the prior year.  Compared to 2007, this measure shows real hourly wages have increased an average of only 0.7% annually.

These two data points, however, provide only one of many ways to assess the issues.  While contentions over this data have been central to many recent policy debates—for example, minimum wage, associated employment law changes, income support proposals, the growing crisis over the ability of many to afford housing and other high costs of living in the state—they are not the only relevant data series for these discussions.

The selection of appropriate data is complicated by a number of factors:

Bureau of Economic Analysis recently released revised compensation data for 2015 that illustrates some of these factors.  Under the Bureau’s definition, compensation includes wages and salaries along with benefits consisting of employer contributions for government social insurance[1] and for employee pension and insurance funds[2].  Not included are nonmonetary factors such as differences in annual leave and holidays between different companies and between the private and government sectors.

As shown in the following chart, both average wages/salaries and compensation for nonfarm wage and salary workers have grown in nominal terms since 2000, with three largely stagnation stretches during the two recessional periods.  Average nonfarm compensation grew at an annual rate of 3.0%, while wages grew at 2.8%.  Annual inflation as measured by the CPI was 2.2%, resulting in low but still positive real growth for both measures.  Average compensation increased $27,624 during this period compared to $21,193 for wages alone. 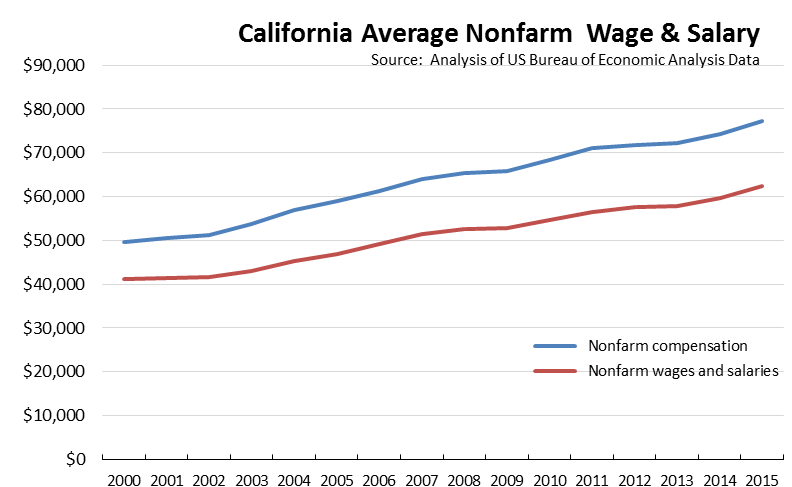 The significance of using average compensation vs. wages/salaries can be seen in the following comparison of the data for private and government workers.  As shown in the following chart, average wages/salaries have tracked closely within a fairly stable band for both state and local workers.  In 2000, average state wages/salaries were essentially equal to the private sector, while local government was about 8% below.  In 2015, state workers were 7% above, while local government was 3% below.   Looking at average compensation, the differences have been significantly wider, with the state government average going from 26% above the private sector in 2000 to 42% in 2015.  While average compensation for the private sector grew somewhat faster in 2015—4.3% growth vs. 2.9% for state and local government combined—the current round of labor agreements will provide additional growth in the government averages.  For example, the recently approved agreement for Unit 2 (Attorneys and Hearing Officers) provides an estimated average net compensation increase of over $34,000 over the next 4 years, or more than the total average compensation currently paid workers in Accommodation & Food Services and Social Assistance industries. 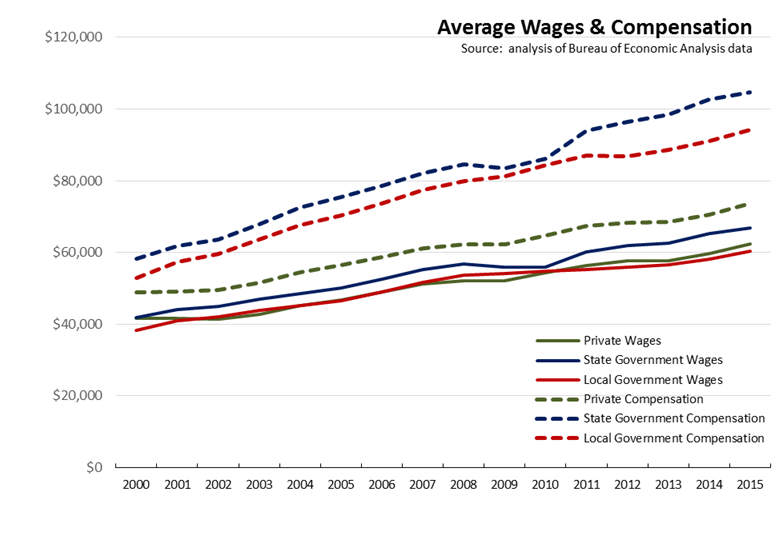 The effects of the two-tier recovery and overall income growth can be seen in the following chart.  Beginning before the recession in 2007 to 2015, the Bureau’s data shows the following changes to the state’s economy:

These changes, however, were distributed unevenly across the economy.  The following compares each industry’s share of the net employment growth to its share of the growth in both wages/salaries and compensation.

Taking some of the top growth industries: 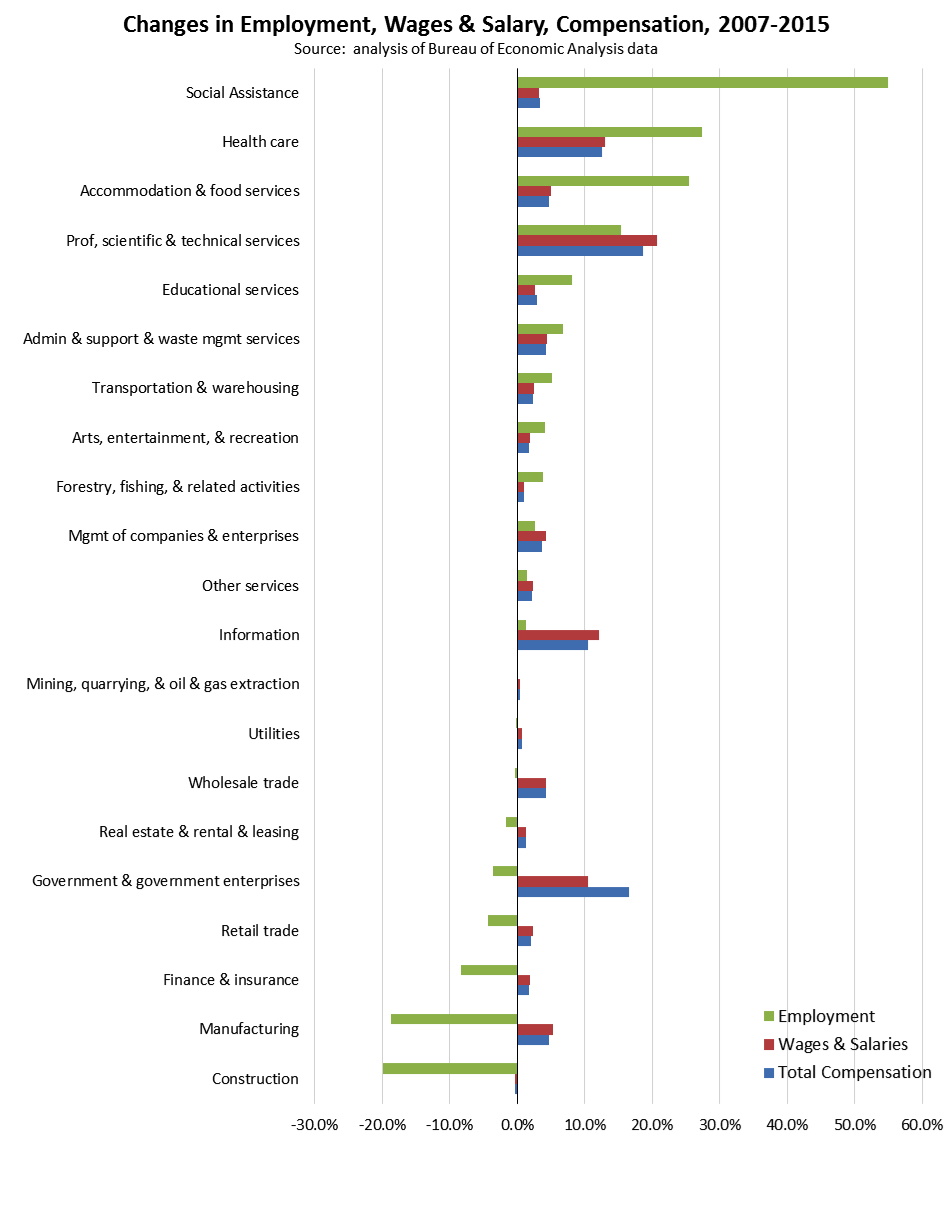