The Labor Force data for September 2017 (seasonally adjusted; California preliminary) is shown below, along with the change from the prior month:

The related not seasonally adjusted numbers (California preliminary), with the change from September 2016:

California Employment Development Department’s (EDD) latest release shows on a seasonally adjusted basis, total employment was up 112,700 from August, while the number of unemployed rose by 13,200. The labor force rose by 125,900.

California’s seasonally adjusted unemployment rate remained level at 5.1%. California tied with Louisiana and West Virginia for the 7th highest unemployment rate among the states. The unadjusted rate dropped from 5.2% in September 2016 to 4.7%.

Total US employment saw a seasonally adjusted rise of 906,000 from August, while the number of unemployed dropped by 331,000. The national unemployment rate was down 0.2 point to 4.2%. The national labor force numbers grew by 575,000.

California’s participation rate (seasonally adjusted) in September rose to 62.3%, while the US rate grew to 63.1%.

The seasonally adjusted California participation rate in September returned to the previous low seen in 1976.

Between September 2016 and September 2017, Bureau of Labor Statistics (BLS) data shows the total number of employed in California increased by 182,700 (seasonally adjusted), or 20.2% of the total net employment gains in this period for the US. California rose to 3rd place behind Florida (which has a civilian working age population only 55% as large as California’s) at 340,000 and Texas (69% as large) at 186,600. Measured by percentage change in employment over the year, California improved to 28th highest. Adjusted for working age population, California rose to 30th.

EDD reported that between August and September 2017, seasonally adjusted nonfarm wage and salary jobs grew 52,200. August’s losses were revised to 7,700 from the previous drop of 8,200. As usual, September’s numbers were heavily influenced by the return to schools. Looking at the underlying unadjusted numbers, State & Local Government Education and Educational Services combined saw an increase of 115,300, a typical but higher compared to years prior to 2016, seasonal effect related to the school year.

In the May Budget Revision, the Governor again pointed to the increasing share of lower wage jobs as one of the prime causes of slowing state revenues growth: The level of wages has been revised downward, and cash receipts have been significantly below forecast. The following chart illustrates this trend for total wage and salary jobs, according to the industry wage classification used previously in other Center analyses of this issue. As indicated, half of net jobs growth since the recession has been in the low wage industries. Middle Class-blue collar jobs continue to show a decline. 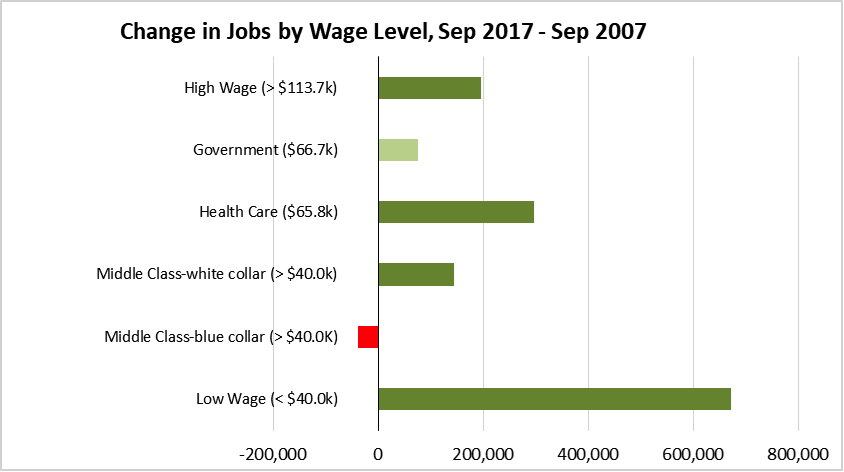 While unemployment rates have improved in the interior counties as a result of seasonal employment, the level of unemployment rates (all data is not seasonally adjusted) continues to vary widely across the state, ranging from 3.4% in the Bay Area to more than twice as large at 7.6% in the Central Valley.

Containing just under 20% of the state’s population, the Bay Area was responsible for 39.8% of the net growth in employment since the pre-recession peaks in 2007. Los Angeles Region provided the next largest share at 21.7%, but spread over 29.2% of the population. Inland Empire is the only other region continuing to show employment gains above their population share. 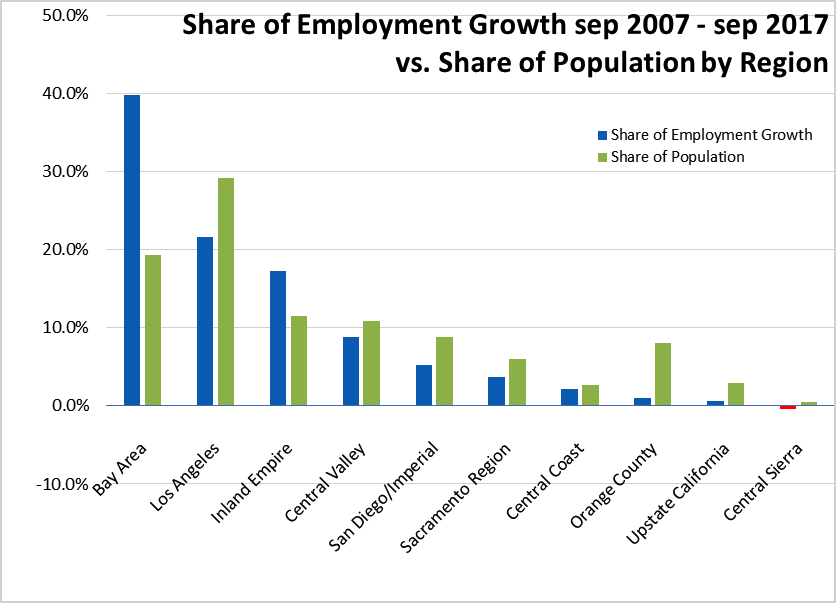