September Numbers in Context: Technical Issues. The monthly numbers continue to be affected by technical factors arising from the current crisis conditions, but with the overall effect diminishing in significance as the surveys have been adjusted. Response rates for both surveys were up compared to the beginning months of the crisis, with the household survey near the 2019 levels and the establishment survey somewhat below. The effect of misclassifying unemployed persons continues to respond to changes in the survey methods, with the results in September at worse increasing the reported unadjusted unemployment rate by 0.4 point.

September Numbers in Context: Survey Timing. The surveys behind the labor force and jobs estimates are done the week of the 12th in each month. Since February, the reported numbers consequently have been overshadowed frequently by rapidly shifting conditions. The pause in processing unemployment insurance claims eliminated one of the main, more current indicators showing the trend in these changes, but resumed reporting will likely fill in this gap.

Further recovery progress in both the jobs and employment numbers now will largely be determined by the changing tier classifications of the counties under the state’s Blueprint for a Safer Economy. Restrictions on activities and business openings vary by tier, with Tier 1 being the most restrictive. Barring any further changes by the state to the criteria and structure of this approach, the Blueprint can also be used as a guidepost for the recovery potential within the state economy.

The following chart is update to the one in our earlier report this week, incorporating the tier revisions announced October 19. The most restrictive, Tier 1 classification now covers 52.0% of unemployed workers in September. Combined, the top two tiers cover 87.8% of the unemployed workers. While the Blueprint has been crafted by taking into consideration equity issues related to public health, this chart illustrates the economic equity issues as well particularly in light of the fact that unemployment continues to be concentrated heavily among lower wage workers.

In contrast, state income tax withholding since March continues to run 2.4% above the comparable period in 2019, an indication that the higher wage jobs subject to state income tax remain less affected by the closure orders. In another indication of the disparate economic effect of the closures, a recent report by Pitchbook indicates that nationally, venture capital deal activity in the first 3 quarters is running 6% ahead the comparable period in 2019 measured by value, with the number of VC mega-deals ($100 million and over) already near the 2019 total. 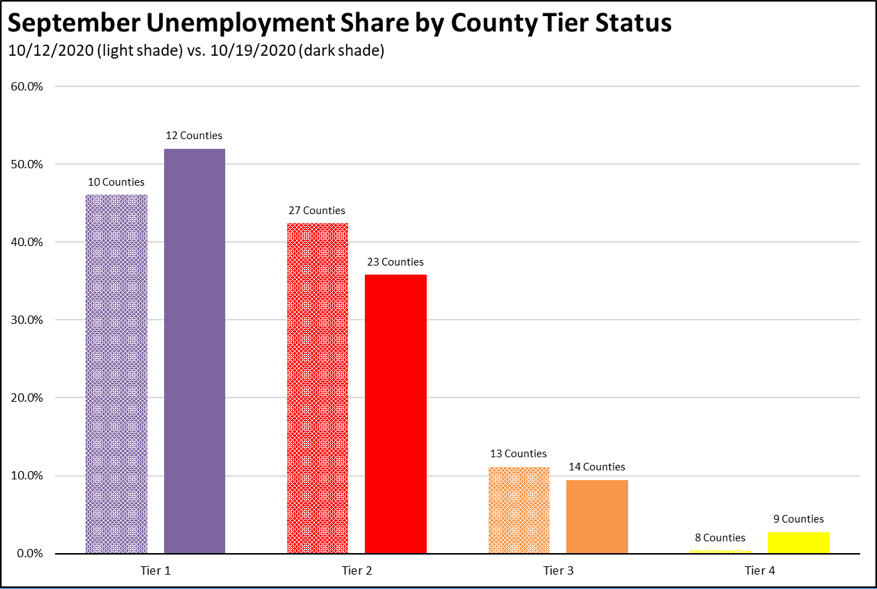 The unemployment numbers, however, only reflect the labor situation for workers counted within the labor force. Based on the seasonally unadjusted numbers, there are another 745,000 workers who for various reasons have left. The numbers reflected above in the chart account for only about three-quarters whose jobs and incomes have been affected by the current crisis.

While the California labor force numbers previously showed a much steeper drop than the rest of the country since February, the September numbers finally produced a small uptick for the state. The overall labor force loss and the participation rate, however, remain well below the rest of the US.

The September numbers again are affected by changes in the Government jobs, as many temporary Census jobs came to an end and as district decisions on school reopenings continue to be in flux.

Comparing the situation in September with the numbers from a year ago, industries more heavily affected by the closures continue to show the greatest contractions, with industries having higher telecommuting potential showing more resiliency in the current situation. “Employment” is the number of persons age 16 and over working, including wage & salary jobs, self-employment, and non-paid family workers in the civilian workforce. “Jobs” are the number of wage & salary jobs, with individual workers holding one or more of these jobs.

Job numbers were below the 2019 levels in all but 2 industries, with the greatest contraction in lower wage Leisure & Hospitality where jobs are still down by about a third during what is typically the highest activity period for this industry. Within this broader category, Arts, Entertainment & Recreation continue to show job losses at close to half, with Amusement Parks and Arcades being the source of about a fifth of that continuing jobs deficit.

EDD reported that employment (seasonally adjusted; September preliminary) growth slowed substantially in September to 47,300 above the revised August numbers, while the number of unemployed dropped by 27,900. The reported unemployment rate improved 0.2 point to 11.0%. The unadjusted rate was up 7.2 points from the year earlier to 10.8%.

California rose to the 3rd highest unemployment rate among the states.

Total US employment saw a seasonally adjusted gain of 275,000, with the number of unemployed dropping by 970,000. The reported unemployment rate dropped 0.5 point to 7.9%.

The total number of persons employed (seasonally adjusted) over the 12 months ending in September was still down 2,082,300. California had the lowest level among the states in terms of absolute employment loss over the year. New York showed a loss of 896,000, Florida at 725,300, and Texas at 607,600.

Adjusted to account for differences in the size of each state economy, California over the year showed an 11.1% contraction, far deeper than for the rest of the US with a loss of 6.2%. Ranked among the states, California had the 2nd worst loss rate.

Nonfarm jobs were down 1,488,900 over the year. Adjusting for population, California loss rate remained the 44th worst among the states. The 12-month jobs loss rate was -8.5% compared to the rest of the US at -6.1%.

Industries showing the greatest contractions over the year were led by Food Services, Arts, Entertainment & Recreation, and Government as temporary Census positions expired.

Regions with jobs providing greater telework options—both due to the nature of the jobs and under the state’s regulations—including the Bay Area, Orange County, and Sacramento saw somewhat lower unemployment rates. The Central Valley and Los Angeles with a higher concentration of lower wage jobs affected more strongly by the state-ordered closures had much rates above the state average.

As an indication of the severity of the current economic downturn, the following chart illustrates how much economic ground each county has lost using employment levels as the measure. Based on annual averages, the chart below indicates the last year each county saw the September employment numbers. Because the current series only goes back to 1990 for most counties, several of the entries indicate “Before 1990.” Los Angeles County is the exception, with data going back to 1976. The “Change” column indicates the change from April, the month reflecting the effects of the initial round of closures. 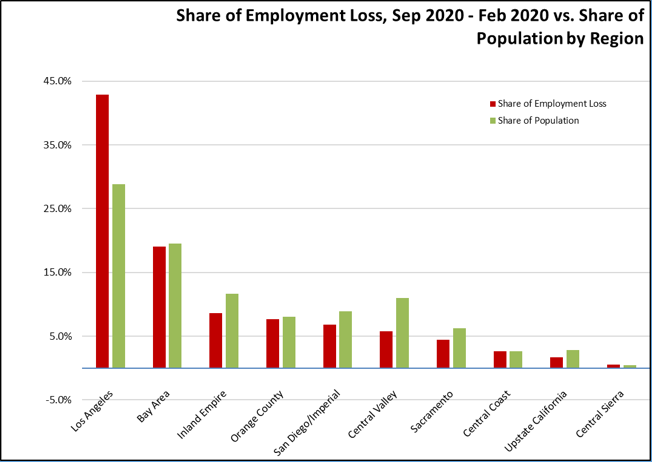 The number of California MSAs among the 20 regions with the worst unemployment rates in August rose to 5. As a result of a pattern of jobs growth in recent years that concentrated on the hardest-hit lower wage, population-serving and tourism service industries in Los Angeles County, Los Angeles-Long Beach-Anaheim MSA (Los Angeles and Orange Counties) sank to the 6th worst in the nation.