The current Special Session for transportation funding called by Governor Brown provides a clear focus on the economic importance of California’s roads and other transportation systems.  This infrastructure network serves critical roles underlying jobs growth in the state:  commuting by workers to jobs, trade and goods movement, tourism, agriculture, education and transportation access for a variety of other purposes including shopping, recreation and entertainment, and trips for other daily activities.

In seeking to accommodate these economic purposes, state transportation policy has gone through various cycles, alternating between a focus on capacity expansion and a focus on higher utilization of existing systems that often has been combined with a push towards alternatives including public transit, bicycles, and other modes.  In its current incarnation, state policy has shifted to a sole funding focus on the state’s rapidly deteriorating roads, largely foregoing capacity expansion other than consideration of technological solutions such as driverless vehicles.  The state’s climate change policies, especially the provisions under the SB 375 land use policies and the proposed OPR revised CEQA guidelines, are likely to continue this emphasis as vehicle-related emissions are targeted through a number of actions.

The recent release of the 2014 American Community Survey data provides an opportunity to gauge how California commuters have responded to this shifting policy. The data clearly reflects that even with the well-documented and rapidly rising costs[1] of the state’s traffic congestion and costs associated with the deteriorating condition of the state’s roads, California workers continue to rely on single occupant vehicles for the primary mode of commuting.  Moreover, their reliance on this mode of travel continues to grow both in absolute and relative terms.

The table below shows the estimates for the different modes of commuting used by workers (age 16 and over) since 1980.  Data is drawn from the decennial census (1980-2000) and the 1-year estimates from the American Community Survey (2005-2014).  During this time, California’s population has grown from 23.8 million to 38.7 million and overall jobs have grown from 10.1 million to 15.8 million.

Means of Transportation to Work by Number of Workers, California (millions)

A number of important observations from this data:

Attendant with the increased reliance on single occupant vehicles, workers are also spending more time commuting.  The number of workers commuting longer than 30 minutes grew from 3.2 million (30.5% of commuters) in 1980 to 6.5 million (40.6%) in 2013 and to 6.8 million (41.4%) in 2014.  This trend stems in large part from the growing congestion on California roads, but also reflects the continuing influence of housing costs on the commuting choices California workers are able to make.  As the state’s regulatory systems continue to drive up housing costs especially within the coastal urban areas, workers also continue to rely heavily on single occupant vehicles to expand their housing affordability options, even in face of the additional time and travel costs associated with these longer commutes.

Note that the data in the table above comes from surveys and survey methods that have changed over time, and as such are not necessarily strictly comparable on a time series basis.  The relative distribution within each year across the commuting modes, however, is for many purposes a more valid basis for comparison.  As shown in the following table—which contains the percentage distribution across the commuting modes for each year—this approach still shows the same general conclusions.  Reliance on single occupant vehicles has grown; public transit has maintained a relatively stable but low share; and carpooling and other modes have declined in relative importance.  Working at home has gone from the least used option in 1980 and moved ahead of both public transit and “other” modes in 2014.

Means of Transportation to Work by Share of Workers, California (%)

Breaking the data down produces similar results on the regional level as well.  The regional data used in this analysis draws from the same sources as for the state:  decennial census county data for 1980-2000 and the American Community Survey county data for 2005-2014.  However, while the state data is able to use the 1-year estimates for 2005-2014, the county data instead relies on the 5-year estimates in order to provide full coverage.  For legibility, not all regions are shown on the charts; data for Central Coast, Central Sierra, and Upstate California are available in the Center’s Economic Indicators. 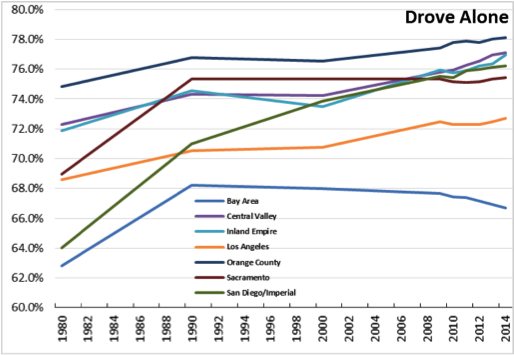 The trend towards greater single occupant vehicle use (measured by percent of commuters) shows increases across all regions except Bay Area and Central Sierra.  Bay Area shows a net increase from 1980, but due to its greater public transit assets, shows a slight decline in the share of commuters driving alone beginning in 2000.  Central Sierra shows a similar general pattern as commuters have shown slight shifts to other commuting modes.  Highest reliance on driving alone is in Orange County, Inland Empire, and San Diego/Imperial along with some of the more rural regions in the state. 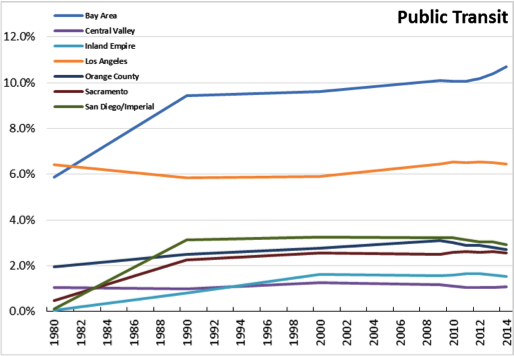 All regions show a declining share of commuting by carpool, with only Central Sierra region showing a slight uptick in the 2014 data.  Carpooling remains highest in Inland Empire and the Central Valley, with the lowest rates in San Diego/Imperial, Orange County, and Bay Area regions. 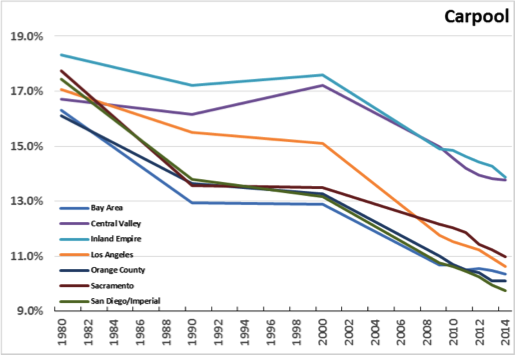 Most regions have seen level or slightly declining relative use of public transit since 1990. The primary exception is the Bay Area which continues to experience an increasing reliance by workers on this commuting mode. Public Transit use remains strongest in Bay Area and Los Angeles regions, with the remaining regions grouped around a lower tier of use.

Aside from some variations in the most recent data, working at home continues to increase in all regions. Use of this commuting mode remains highest in many of the rural counties (Central Sierra, Upstate California, Central Coast), along with San Diego/Imperial and Sacramento regions. Lowest use is in the Central Valley. 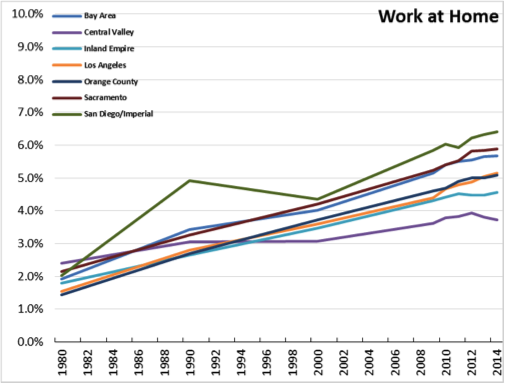 Some general conclusions from this data:

To provide future updates on this data, the Center’s Economic Indicators have been revised to include the commuting mode under Travel Time to Work in the Quality of Life Indicators.  These data are provided for the state, regions, counties, and the Senate, and Assembly districts.

[3] Peter Ganong and Daniel Shoag, Why Has Regional Income Convergence in the US Declined?, January 2015.

[4] Jason Furman, Barriers to Shared Growth:  The Case of Land Use Regulation and Economic Rents, November 2015.