Although analyses have been conducted for specific rules, less work has been done looking at the expanding number of rules that affect the costs of construction directly. This report considers a number of both proposed and recently adopted rules that raise actual costs of construction or that attempt to ameliorate the effects of the state’s current regulatory structures by shifting additional costs such as for affordable housing on the remaining, generally middle class market-rate component.

The analysis first develops a core analytical structure around legislative proposals this session to require use of prevailing wage labor for all residential construction. The cost impacts are then expanded into more cumulative terms using previous work assessing the costs of Zero Net Energy requirements, increasing local requirements for affordable units, and offsets, VMT reduction, and other measures related to the state’s climate change policies. The impacts of these construction cost increases are then considered through their implications to employment, wages and incomes, fiscal effects, poverty, and various housing market measures including costs, supply, and crowding.

This report does not include all regulatory cost drivers in California. Land use regulations including the costs related to CEQA are treated as base conditions. Similarly, the AB 32 and related regulations adopted to date and other regulatory cost drivers—including the recently signed increase in fuel taxes—affecting construction equipment, materials, and fuels are also not explicitly considered. These additional regulatory cost components, whether already incorporated into California’s rising housing and rental prices or awaiting to become fully effective—further intensify the results of the analysis presented below.

This report analyzes the potential effects from recently adopted and currently proposed regulations having significant effects on the cost of new housing in California. Specifically, these regulations considered include proposals that would require all housing in California to be built while paying workers at prevailing wage levels along with Zero Net Energy requirements, increasing local requirements for affordable units, and offsets, VMT reduction, and other measures related to the state’s climate change policies. The analysis considers the effects on housing prices and rents, California employment and income, and related issues where increased housing prices will affect housing affordability, poverty, homelessness, overcrowding, and related issues in the state. The prevailing wage analysis is used to develop the core data and analytical base, while consideration of the other regulations
draws from related studies.

Drawing from a series of public, academic, and construction industry sources and based on 2016 data, requiring builders to pay government-determined prevailing wage rates would raise the median price of a new home by $42,900 to $79,000, the price of a unit in a new multi-family development by $47,000 to $86,500, and the monthly rent for those units by $250 to $460.

Over time, this factor alone would push housing prices up overall by about 13% primarily in inland regions, but much higher in coastal areas with significant historical building shortfalls.

Increasing costs at this level are likely to bring currently approved developments to a halt due to project economics, reducing the level of new housing being built in California from its current level of about 100,000 units a year to only minimal residual construction of affordable units that are financed from public funds.

Existing regulatory and cost barriers have kept new housing construction below levels required to keep up with population growth in all but 3 of the past 27 years. These additional steep cuts in building activity will add to the growing supply deficit that has raised housing costs for all Californians. 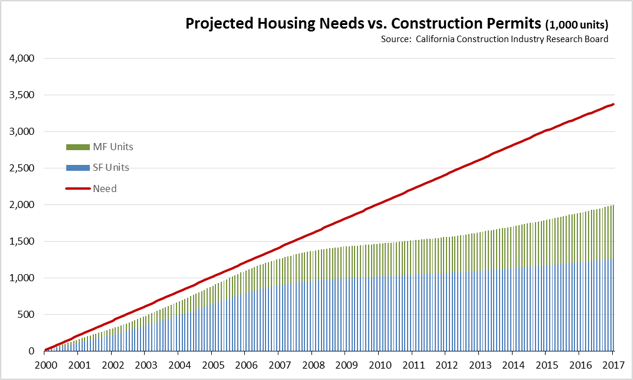 Prevailing wage is not the only regulatory cost driver already approved or proposed within the same time frame: Zero Net Energy, local affordable housing set-aside mandates, VMT reduction and other measures under the CARB Scoping Plan and SB 375 Sustainable Communities Strategies, offsets and other climate change mitigation through CEQA, and other regulatory cost drivers on construction equipment, materials, and fuels.

Combined with prevailing wage, these regulations would produce a price increase over the 2016 median price of new homes by well over $197,000 just for the first three components where cost estimates are available. This amount is larger than the 2016 average median home value in 29 states, according to Zillow Data, including Texas, Florida, Pennsylvania, Illinois, and Ohio. The required down payment on a median price new home incorporating these costs would be larger than the entire average median home value in 15 states.

Combining both direct and indirect effects, the annual drop in home construction would produce a loss of $20.9 billion to total state incomes, 372,700 fewer jobs, and a $34.2 billion reduction in total California GDP.

From the direct effects alone, the annual drop in home construction would result in a $15.5 billion loss to state and local revenues. The impact to state revenues would be $2.6 billion of this amount, but cuts in property taxes would produce further pressure on the General Fund by reducing the amount of locally available Prop. 98 funding for K-14 schools.

Under the Supplemental Poverty Measure incorporating housing cost effects, California has the highest poverty level among the states, measured both by poverty rate and the number living in poverty. The estimated price increases would raise state poverty by another 481,000 persons.

In 2015, California’s home-ownership rate was lower than every other state but New York. As housing affordability drops in response to prevailing wage effects on prices, even more California households will be unable to become homeowners. This effect will likely be more significant in the traditional regions of high ownership in the interior such as the Inland Empire and Central Valley, where sharply higher prevailing wage cost increases combined with generally lower income levels would produce some of the strongest impacts on overall affordability.

California in 2015 had the second highest overcrowding rate among the states, at 8.4% of households compared to 3.4% for the national average. New cost measures such as prevailing wage would reduce new supply additions, and produce subsequent increases in the overcrowding rate as a growing population is limited by an essentially static supply.

In 2015, 52.9% of all California renter households were cost-burdened, a level that would increase to an estimated 61.9% as a result of price increases from a prevailing wage requirement.

California construction employment remains 17% below the peak levels in 2006, while Residential Building Construction employment is nearly a third below. Rather than raising mandated wage levels that would benefit only the few remaining workers on the residual amounts of publically-funded affordable housing, regulatory and other reforms that reduced the costs of and barriers to housing construction would have far wider income benefits. Just returning to the 2006 building levels, total annual wages paid to current Residential Building Construction workers would rise by an estimated $0.7 billion, and annual wages from increased jobs in this industry would add another $2.4 billion a year, for a total of $3.1 billion. Other building trades required for housing construction would see higher incomes and jobs as well.

California’s current high housing costs have resulted in longer commutes as Californians seek housing they can afford in outlying areas. Previous analyses by LAO found that a 10% increase in a metro area’s rental costs produced a 4.5% in commuting times.

In 2015, 7.4 million Californians spent 30 minutes or more (one way) on their daily commutes, up from 6.1 million in 2005. Those spending an hour or more was 2.1 million in 2015, up from 1.6 million in 2005. As price increases from a prevailing wage requirement sharply slow new supply additions, the resulting price effect on existing housing costs will drive lower and moderate income households further away from job centers as they seek housing they can afford.

Read the full report at centerforjobs.org.