The Center for Jobs and the Economy has released a special report on the forecasted recession and the California state budget that was released by the governor on January 10, 2023. For additional information and data about the California economy visit www.centerforjobs.org/ca.

While the recent budget projections by both Department of Finance and Legislative Analysts’ Office do not anticipate a recession in 2023, other sources expect at least a mild downturn especially in response to continued Federal Reserve rate actions to combat inflation.  The effect on employment and the unemployment rate, however, is uncertain.  Jobs growth in the state continues to be held back more by labor shortages, as indicated in the continuing high level of unfilled job openings, and in other industries such as trade more by infrastructure and comparative cost factors.  Employment losses within one part of the economy consequently are just as likely to be offset by hiring in others at least in the near term.  Even within tech, the high numbers of unfilled job openings in the affected industries suggest layoffs are just as likely to be met with hiring by other companies and creation of new startups, although not necessarily within this state.

From a state budget perspective, the important factor is not so much the overall job declines in a recession, but where those losses occur.  As discussed previously, the state budget is overly reliant on the economic results in one region—the Bay Area—and to a large extent one industry, the Tech industry.  In the latest results for the 2020 tax year from the Franchise Tax Board, the Bay Area share of personal income tax receipts—which made up 69% of total general fund revenues in 2020-21—grew again to 43.2% while containing only 19.8% of total population.  Drops in the Bay Area contribution previously led to the severe budget problems the state experienced during the Dot.com Bust at the beginning of the 2000s.  The extraordinarily high reliance of the budget on this one region maintains the conditions that could lead to a similar result in the future. 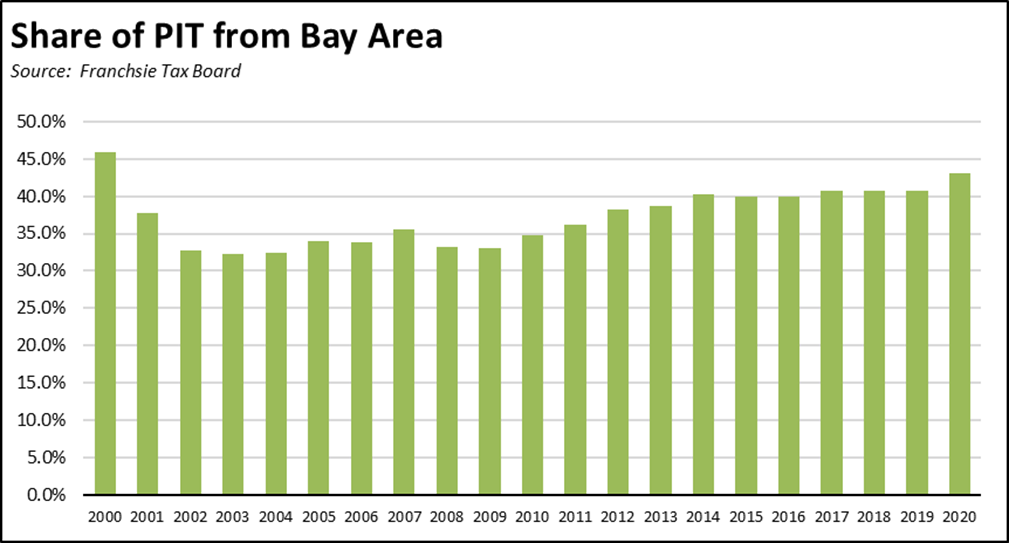 The state’s highly skewed tax rate structure also makes the budget heavily dependent on the financial outcomes from a very small portion of the state’s taxpayers.  In the recent results for 2020 tax year, only 115,029 taxpayers (the 1.0% with AGI of $1 million or more) paid 44.7% of total personal income tax.  Moving up the income ladder, only 13,360 of these taxpayers (the 0.1% with AGI of $5 million or more) paid 25.8%.  These payments are in turn heavily dependent on capital gains income, which in the current budget projections are down substantially due to performance in the stock and real estate markets and the virtual collapse of IPOs coming from the tech sector.  These payments are also heavily dependent on these taxpayers remaining in the state and continuing to be subject to the state’s tax rates on income as well as other tax sources.

At least through 2020, the taxable millionaire base (those with a federal AGI of $1 million or more) in the state continued to grow.  In the recent tax data from the IRS, the number of California taxpayers in this income class grew 142% between 2011 just prior to the tax increases under Proposition 30 and the latest data in 2020.  California’s growth rate, however, was exceeded in other states with no or much lower rate personal income tax, including Idaho at 271%, Utah at 247%, Washington at 228%, Montana at 209%, Arizona at 172%, and Nevada at 153%.  These relatively stronger results from states that are also a destination for much of California’s out-migration are an indication that at least a portion of the potential tax base has been leaving the state.  While the taxable millionaire base grew at least through 2020, the indications are it could have grown more. 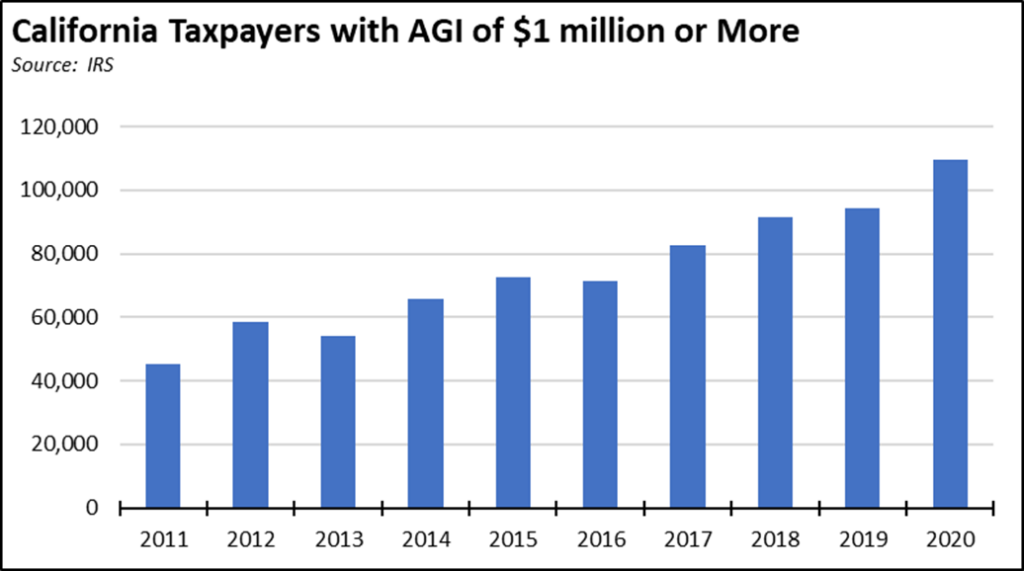 The tax payments from this extremely small base, however, supported an unprecedented escalation in state expenditures especially during the pandemic years.  As indicated by a recent report from LAO, state spending surged as the result of substantial surpluses beginning in 2020, with state spending rising from about a static 8% of personal income to about 10%.  Total general and special funds spending grew $191 billion (159%), from $120 billion in 2011-12 just prior to the tax increases under Prop 30 to $311 billion in the current number proposed for 2022-23. 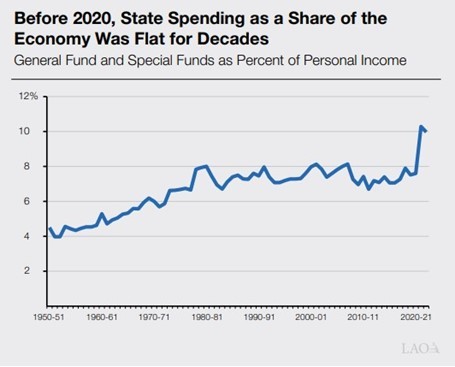 Much of this growth occurred only in the pandemic years, with total general and special fund expenditures surging 55% between 2019-20 and the most recent numbers proposed for 2022-23.

The current budget process is widely viewed as shifting from dealing with surpluses to coping with deficits.  Viewed from the expenditure perspective, however, the more accurate picture is a shift from dealing with large surpluses to having to adjust to surpluses that aren’t as large as expected.  The budget crisis that occurred at the beginning of the 2000s came about from expectations that the Bay Area bounty would go on forever.  What turned out to be temporary revenue surges were used to support permanent baseline spending increases.  In the current circumstances, the budget discipline that instead shuffled surplus revenues more to one-time and limited term spending make the adjustments relatively easier.  The broader revenue risks, however, continue to arise from the dependence on the state from a very small portion of its total revenue base, both a potentially mobile income class and more importantly from state policies that favor a single industry rather than broader growth in other portions of the economy.