Imports through California’s ports continued to surge as companies continue to rebuild inventories and attempt to strengthen inventories in anticipation of persistent supply disruptions, coming at the same time trade activity entered the traditional period of stocking to meet anticipated holiday demand. Nominal exports were 0.5% off pre-pandemic August 2019 levels, while imports were up 10.8%.

Trade levels remained heavily affected by blockages throughout the supply and logistics chains. As of October 4, the Marine Exchange reported 84 ships (62 container ships) at anchor or drift off the San Pedro Bay ports, compared to 64 a month ago and a recent high of 95 in the past month. Congestion, however, is not just limited to California but is also severe in other ports throughout the US. As noted by Commissioner Carl Bentzel of the Federal Maritime Commission in a presentation to the recent meeting of CalChamber’s International Trade group, “This is the largest shipping meltdown since WWII.”

Port congestion is not a new issue, but has been growing since last November. Compounding this situation are various other factors as well, including: 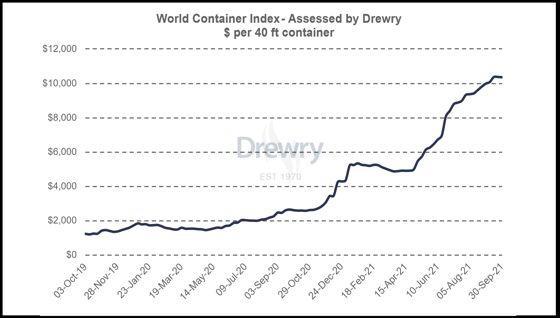 The immediate consequences of this situation are being felt as additional pressures on the rapid rise in inflation in recent months, likely to be compounded in the coming months as increased savings fueled in large part by the various pandemic assistance payments chase scarcer goods during the upcoming holiday season. More lasting, continued and now rising supply shortages will continue to be a brake on jobs recovery within many industries and the supply and service businesses that support them.

Total California goods exports were up $1.8 billion from August 2020 (up 13.8%). California remained in 2nd place with 10.44% of all US goods exports (12-month moving total), behind Texas at 20.39%. August 2020, however, was still in the period when exports were heavily affected by the pandemic lockdowns both here and in other states and countries. Compared to pre-pandemic August 2019, exports were off 0.5% in nominal terms and more substantially in real terms.

Reflecting the continuing surge in imports and more gradual recovery in exports, California’s balance of goods trade activity through state businesses broadened to -$26.1 billion, compared to a level of -$23.4 billion in August 2020. California trade accounted for 27% of the US trade deficit in goods in August 2021.

Top 20 exports by value are shown below, along with the change from August 2020.