In nominal terms, California origin exports exceeded the pre-pandemic 2019 levels for the 4th month in a row. In real terms, however, the numbers continue to show a decline.

Import activity through the state’s ports remained high as companies rebuild inventories and as shipments adjust to the Lunar New Year holiday period production shutdowns. Measured by value, imports through the ports were up 21.6% compared to the pre-pandemic period in December 2019, the 5th month in a row for double-digit gains. Congestion within the ports and subsequent blockages in other parts of the supply chain, however, remain a constraint on goods movement potential. Measured in TEUs (twenty-foot equivalent unit), loaded import container activity in the Ports of Los Angeles and Long Beach compared to the same month in 2019 dropped for the 4th month in a row, with December down 14.2%.

Port congestion remains high, although down from the peak backup of 109 container vessels recorded for the Ports of Los Angeles and Long Beach on January 9. On October 20, 2021 when the state issued its measures to tackle the ongoing supply chain issues, the backup was at 71 container ships and 108 total ships at anchor or loitering off the ports. In the latest numbers for February 4, the total container ship backup was 89. As indicated in the screen shot below, current vessel management measures have disbursed the backup more widely, with many loitering or slow speed steaming off Mexico due to safer weather conditions but in the process also shifting air quality issues further south. 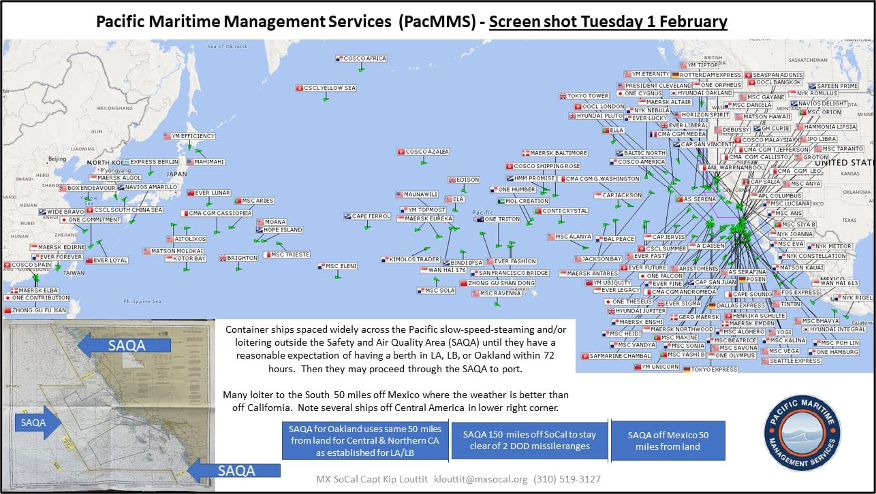 In a broader measure of supply congestion globally, the New York Federal Reserve Bank has developed a new Global Supply Chain Pressure Index. The Index is developed from two components: (1) change in cost for cross-border transportation derived from various sources and (2) supply congestion as measured by Purchasing Manager Index (PMI) surveys for order delays and production backups in the key manufacturing economies. As indicated in the chart, global supply congestion peaked at the end of 2021, but may be beginning to ease although remaining at elevated levels. Development of this Index as an ongoing metric currently is being completed. 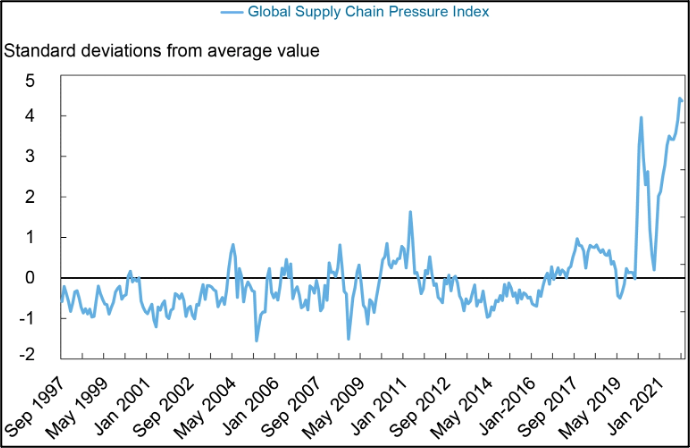 California’s balance of goods trade activity through state businesses broadened to -$28.0 billion, compared to a level of -$22.4 billion in December 2020. California trade accounted for 28% of the US trade deficit in goods in December 2021.

Top 20 exports by value are shown below, along with the change from December 2020.