Trade activity has substantially recovered from its earlier plunge at the beginning of the pandemic period. Incomes except for the lower wage workers predominately affected by the state’s closures have largely been maintained during this period both through the rapid adjustment of employers to teleworking and the transfer payments enacted by the federal and now state governments through the various COVID relief measures. The most recent personal income data from US Bureau of Economic Analysis indicates California personal income was essentially stable in the 3rd quarter of 2020, edging down marginally by 0.4% from the previous quarter (workplace earnings up 6.9% but transfer payments down 17.4%) but up 8.8% from the same period in 2019 (earnings up 2.5%; transfer payments up 54.6%). This income stability has maintained consumer demand for many products, especially imported products, although savings rates have also increased and the product mix within that demand has shifted in response to the current conditions. 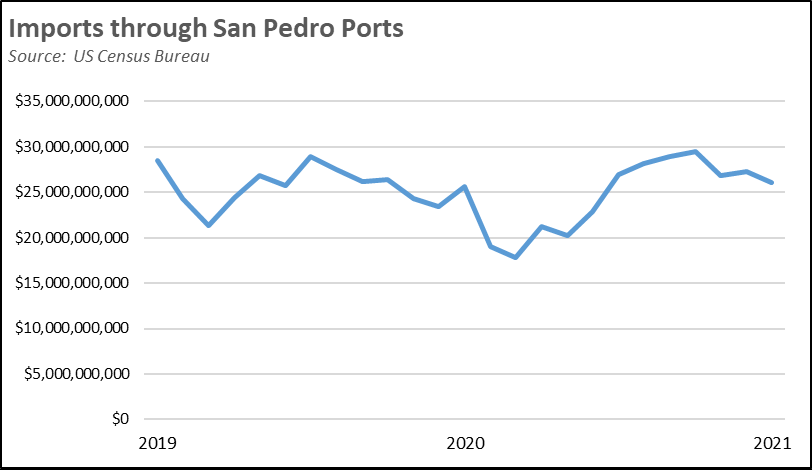 The increase in vessels is now overwhelming capacity in the state’s ports, particularly in the nation’s leading trade gateway in San Pedro Bay. While this congestion is also being experienced in other countries as well as supply chains recovered from the earlier disruptions, the San Pedro congestion has led to an increase in the number of vessels waiting offshore, the length of their waits, and diversion of cargos to other West Coast ports. Additional problems are beginning to compound as a result of delays in returning empty containers to Asia to sustain the cross-Pacific trade.

As measured by value rather than TEUs, the January import data suggests that shippers are already turning to alternative modes as well as other ports to bypass the congestion, with air shipments through LAX rising significantly. The data does not include any shipments through the Baja California ports in Mexico.

Increasing congestion has several ramifications beyond just the increasing delays within the overall supply chain. For consumers, shortages of goods can be reflected in rising prices not only for consumer products but other essentials such as building materials for new housing. From an environmental perspective, ships waiting off the coast increase overall emissions related to goods movement. For jobs, trade represents one of the state’s largest blue collar, middle class wage pools, and deterioration in the state’s competitive advantages through growing congestion and delays threatens to undermine this base.

While the state’s transportation strategies have shifted away from capacity growth and to promoting modes such as mass transit and other alternatives that were dropping in use even prior to the current crisis, the current congestion is a reminder of the need for basic infrastructure investments as the missing element in promoting “quality jobs” within the state.

California’s balance of goods trade activity through state businesses broadened to -$20.2 billion, compared to a level of -$18.5 billion in January 2020. California trade accounted for 26% of the US trade deficit in goods in January 2021.

Top 20 exports by value are shown below, along with the change from January 2020.