In nominal terms, the January 2022 results show both California exports and trade flows through the state’s ports back to or above the pre-pandemic January 2020 levels. In real terms, however, as measured by the CPI, export levels and flows remain down, while the overall numbers remain dominated by a steep rise in imports.

Port congestion remains high but easing from the peak backup of 109 container vessels recorded for the Ports of Los Angeles and Long Beach on January 9. On October 20, 2021 when the state issued its measures to tackle the ongoing supply chain issues, the backup was at 71 container ships and 108 total ships at anchor or loitering off the ports. In the latest numbers for March 4, the total container ship backup was 56.

While congestion at the ports and at other points in the California and national supply chains continue as significant barriers to normal trade flows and major contributors to growing inflation, these issues are not unique to the state. In the map below indicating the port congestion at the end of February, a large number of choke points remain in the global trade networks in addition to those on the West Coast. 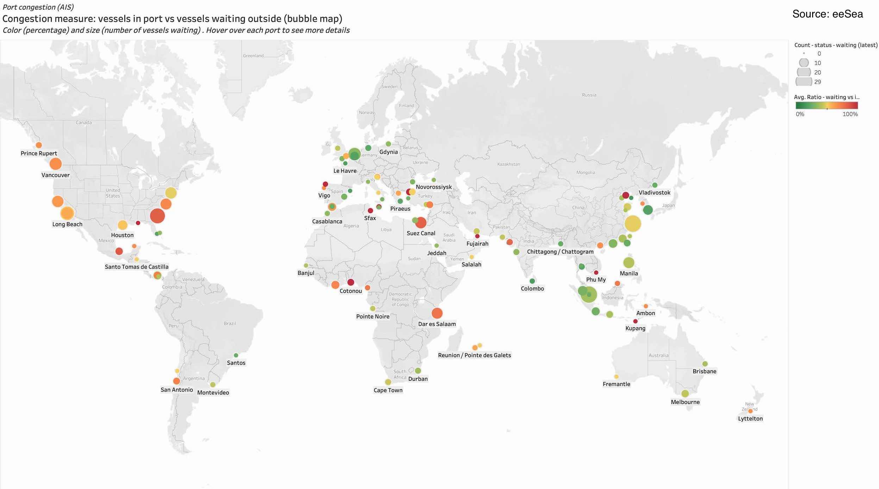 The ongoing supply chain disruptions are now joined by the as yet unknown effects coming from the Russian invasion of Ukraine and the subsequent rounds of sanctions on Russia. California trade with both countries is relatively low, comprising less than half a percent of the total through the state’s businesses. With the exception of imports from Russia, trade levels also have not changed substantially from the pre-pandemic period in 2019. Note that in both cases, the values shown for origin exports and imports cover both goods produced/used within the state as well as goods aggregated by businesses within the state for export or shipment to other states.

The Top 10 Exports to both countries in 2021 are shown in the following tables.

California began importing oil from Russia beginning in 2007 as in-state production declined and as shipments from Alaska were dropping as well. Currently, about 5% of the state’s crude oil imports come from Russia. In 2007, average California oil production (including federal offshore) was 598,7000 barrels a day, dropping to 357,900 barrels in the latest data for 2021. In contrast, US Energy Information Administration data shows imports of Russian crude oil in 2021 were only 42,400 barrels a day, an amount that could have been easily offset by policies ensuring California produced more of its ongoing energy needs, both now and during the extended period required to meet the state’s “clean” energy goals.

Nationally, there is more than enough current production to make up for this amount, but there are no oil pipelines connecting the state to the national markets. In addition, Jones Act restrictions make it uneconomic to ship oil to the state (and the Northeast states as well) from the Gulf Coast. Consequently, California’s continued oil demands will instead likely be handled by other import sources rather than domestic production and the associated jobs.

California’s balance of goods trade activity through state businesses broadened to -$26.9 billion, compared to a level of -$20.2 billion in January 2021. California trade accounted for 27% of the US trade deficit in goods in January 2022.

Top 20 exports by value are shown below, along with the change from January 2021.