October continued the surge in trade activity as shipping for the holidays and rebuilding depleted goods and components inventories remained high along with an expansion in state exports. Total trade through the state’s ports was at its second-highest monthly level in the data since 2003 as were state origin exports. State destination imports were at their 3rd highest. Note that both the export and import numbers include goods produced/used within the state as well as those consolidated in the state for shipment from/to other states. These numbers, however, incorporate different job center activities within the state and consequently are the preferred measure for the purposes of the Center.

These rankings are based on nominal values. Adjusting to real values that incorporate the growing inflation costs would place the rankings lower. The numbers while substantially improving indicate that exports in particular but overall trade as well is only beginning to return to pre-pandemic levels. The state has yet to experience substantial growth that would assist in its lagging economic recovery rate. Measured on a 12-month running total as in the chart below, the October results indicate exports have largely returned to pre-pandemic 2019 levels, but have yet to exceed prior peaks.

Overall trade activity remains hindered by blockages within the supply chain, including both the transport of materials, components, and finished goods and production disruptions caused by these delays along with renewed concerns over the Omicron variant. To cope with the growing congestion, the shipping industry recently introduced a new process to reduce the number of ships within a 40-mile Safety and Air Quality Area (SAQA) around the ports of Los Angeles and Long Beach during the winter weather months. Inbound ships are now subject to reduced steaming speeds and loitering outside the SAQA area.

Due to the supply chain problems, deliveries remain slowed throughout the economy. Institute of Supply Management (ISM) reported its November Supplier Deliveries Index for Services was unchanged from October at 75.7, the second-highest level ever (an Index over 50 indicates supply deliveries are slowing; below 50 that delivery times are improving). The Supplier Deliveries Index for Manufacturing was also elevated at 72.2 but was slightly improved over October, indicating that delays are still growing but at a somewhat lower pace.

Other ISM indicators show only limited progress in resolving the current supply crunch. Their Backlog of Orders index was also growing for both Services and Manufacturing, but at a slower pace than in prior months. Prices also continue to increase, but again at a slower pace. These two indices are the inverse of the Supplier Deliveries—an Index over 50 indicates that backlog/prices are increasing. The results indicate, however, that both the federal and state actions announced in October have yet to produce substantial relief to the supply chain disruptions.

The October trade number also indicate California has continued to lose ground to Texas as the leading trade center as measured by total trade volume through each state’s ports. 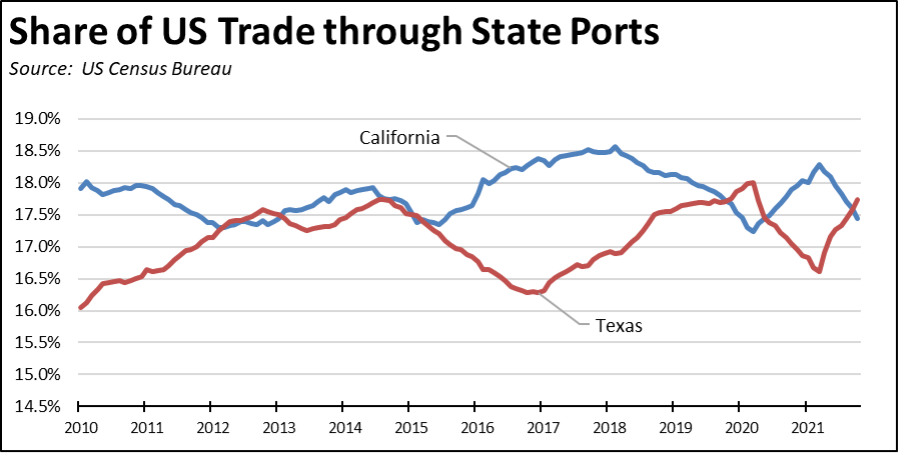 California’s balance of goods trade activity through state businesses broadened to -$26.2 billion, compared to a level of -$24.7 billion in October 2020. California trade accounted for 30% of the US trade deficit in goods in October 2021.

Top 20 exports by value are shown below, along with the change from October 2020.

The more detailed Harmonized System product listing of the top 20 exports again reflects the diversified nature of the state’s export activities, with a combination of higher tech manufacturing and pharmaceuticals combined with the traditional elements of the economy in manufacturing, agriculture, and oil and gas production. The green/clean energy component on this list—electric vehicles—accounts for only 1.4% of total origin exports, another indication while green/clean energy jobs have the potential to produce California jobs in the future, they remain limited in their ability to account for more than a relatively small share of the state’s overall jobs needs.