The October data indicated weakening across all trade measures as exports from China continued to be hampered by that country’s lockdown strategies, importers continued to adjust inventory management, and as international economic conditions remained unsettled. Origin exports were down from October 2021 and up only 1.5% in nominal terms from pre-pandemic October 2019. Destination imports were up 2.9% in nominal terms (down in real terms) from the prior year, but still expanded 18.9% from October 2019. Overall trade flows through the state’s ports were up only 1.5% (down in real terms) from October 2021, while both the state’s share of total US trade flows and share of origin exports continued to erode. 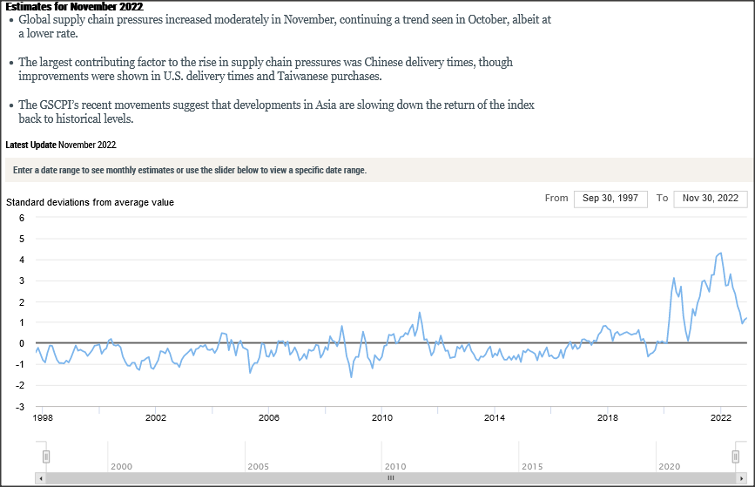 Within California, recent reports indicate backups off the San Pedro ports have largely ended, although November still saw days with some container ships at anchor or loitering. While the immediate threat of a national rail strike was resolved through Congressional action, the West Coast port talks still are ongoing.

The share of total US goods trade (exports and imports) through California ports continued dropping to 16.14% (12 month moving average; compared to 16.27% in September 2022 and 17.42% in October 2021). California’s trade position has been eroding consistently since reaching its near term high of 18.27% in March 2021, and longer term is down from previous highs of around 20% at the beginning of the 2000s.

While dropping in relative terms, the state’s continued strength in this area forms the trade-related base for one of California’s largest centers of middle-class, blue-collar jobs. Transportation & Warehousing alone provided 795,800 wage and salary jobs in the latest data for October, the primary industry showing sustained growth during the pandemic with a gain of 130,700 since February 2020.

Top 20 exports by value are shown below, along with the change from Oct 2021.