In its 8/31/2015 Update, the California Energy Commission estimated a baseline inventory of 146,000 PEVs (plug-in electric vehicles) built up between March 2011 and July 2015. Under this program, vehicles eligible to be counted against the ZEV goal include PEVs—battery electric vehicles (BEVs) and plug-in hybrid vehicles (PHEVs)—and, as they become commercially available, hydrogen fuel cell electric vehicles (FCEVs).

The Energy Commission anticipates that the bulk of the complying sales going forward will come only towards the end of the target period—2/3 of the sales coming in the last 4 years of this period, as shown in the following figure from the Commission’s Update. 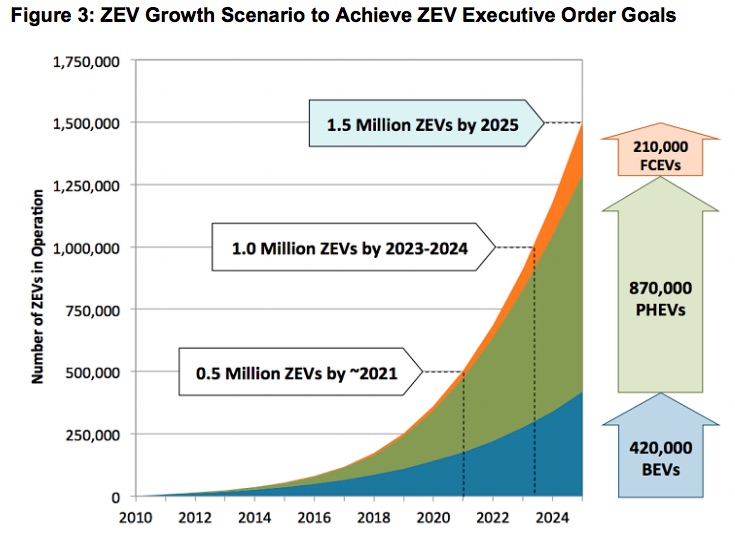 To provide a more frequent tracking of progress towards this goal, we have combined the Commission’s baseline inventory estimate of 146,000 with the quarterly new vehicle registration data released by the California New Car Dealers Association (CNCDA). This approach provides an overestimate of the number of ZEVs actually registered in the state as it does not account for vehicles withdrawn from the fleet due to accidents, returns, trade-ins, owners moving out of the state, and other actions causing vehicles to be removed from the in-state fleet. This factor will be adjusted, however, as the Commission updates its estimates in periodic reports and the baseline amounts in the calculations are adjusted. 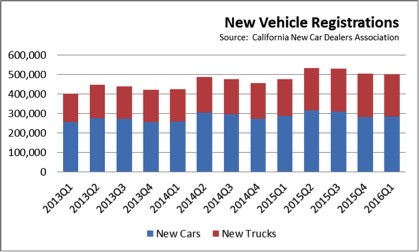 A summary of the most recent data from CNCDA for the first quarter of 2016:

Combining the past 3 quarters of CNCDA data to the Commission’s base amount produces a current ZEV estimate of 193,000 vehicles as of March 2016.

Accounting for normal fleet turnover rates and reductions from persons moving out of California, quarterly/annual PEV sales would need to be more than 2.8 times as large in order to meet the 2025 goal. 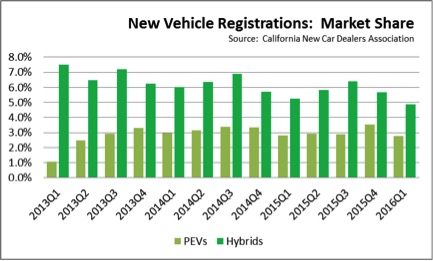 Manufacturing Provisions of the Executive Order Yet to be Implemented

To date, the primary efforts of the state agencies have been on financial support for expansion of recharging infrastructure, funded through a variety of sources including AB 32 auction proceeds, fees on utility ratepayers, and redirection of state civil fines from the general fund to this administratively-created priority.

Incentives to manufacturing instead have concentrated on various state and federal subsidies for the purchase of these vehicles, most of which existed prior to the executive order and all of which can accrue to any manufacturer, not just Californian. These include direct federal tax credits of up to $7,500 and California rebates of up to $6,500 for the purchase of qualifying vehicles, state subsidies for charging stations, and the sale of ZEV credits. Under this last component, vehicle manufacturers are subject to ZEV requirements under California regulations and certain other states’. Companies not producing the required numbers of ZEVs and offering them for sale can instead meet the requirements by purchasing credits from companies producing more than their allotted amount. For example, Tesla’s most recent 10-k indicates they earned $168.7 million through the sale of regulatory credits in 2015, a subsidy essentially funded by purchasers of other non-ZEV vehicles through higher prices.

Rather than increasing the state’s competitiveness for an expanded manufacturing base, recent actions have instead increased the difficulty of siting and operating these facilities in California, including increasing restrictions under the state’s employment laws, regulatory actions that are leading to increasing electricity and other energy rates, the continuing expansion of the state’s already extensive California-only regulations, and a permitting and siting decision process that can take years to complete.

Rather than expanding the ZEV-related manufacturing base, the two most recent major siting decisions in fact rejected California in large part due to the fact that its permitting systems did not provide the timely decision making required for high tech facilities of this type serving a rapidly evolving consumer market. The Tesla Gigafactory and Faraday’s production factory announced in December have in fact both broken ground in Nevada in less time than it would take to even begin filing permits in California. And while Faraday has since announced negotiations over another possible facility in Vallejo, this record to date shows the state agencies still have much work to do to act on these provisions in the Executive Order and make them functional.