The latest new vehicle sales data from California New Car Dealers Association shows that as expected, the above trend ZEV sales in Q4 2017 were likely consumer responses to the potential sunset of related federal subsidies. The Q1 sales of true ZEVs (battery and fuel cell vehicles) were slightly below the quarterly levels from a year prior. Total PEV sales (plug-in hybrids and ZEVs) were up solely as a result of continued shifts from hybrid to plug-in hybrid sales, likely reflecting continued consumer acceptance issues related to range, higher purchase price, and reliability of the new technologies. Key findings from the data:

Rather than only true ZEVs, the numbers in the Executive Order and previous interpretations by the agencies indicate the goal is to be achieved by both ZEVs (battery electric vehicles (BEV)) that run only on electricity and plug-in hybrids (PHEV) which run on both electricity and motor fuels.  Consequently, only a portion of the vehicles being counted to meet the zero emission goal—roughly half based on current sales volumes—will in fact produce zero emissions.  Additionally, FCEVs (fuel cell electric vehicles) also would count towards the ZEV total, but CNCDA show total market share for these vehicles at only 0.1%.

The Executive Orders, however, also refer to ZEVs on California roads, while the agency accountings concentrate on sales. Using prior Energy Commission reviews to account for ZEVs no longer on the roads as a result of accidents, moves out of state, and other factors that over time remove vehicles from the active fleet, the actual progress rate consistent with the Executive Order language of “vehicles on California’s roads” would be 7.2% rather than the 7.8% shown in the chart below.

Accounting for normal fleet turnover rates and reductions from persons moving out of California, PEV sales would need to be 4.3 times higher to meet the 2030 goal. True ZEV sales would have to be 8.5 times higher. 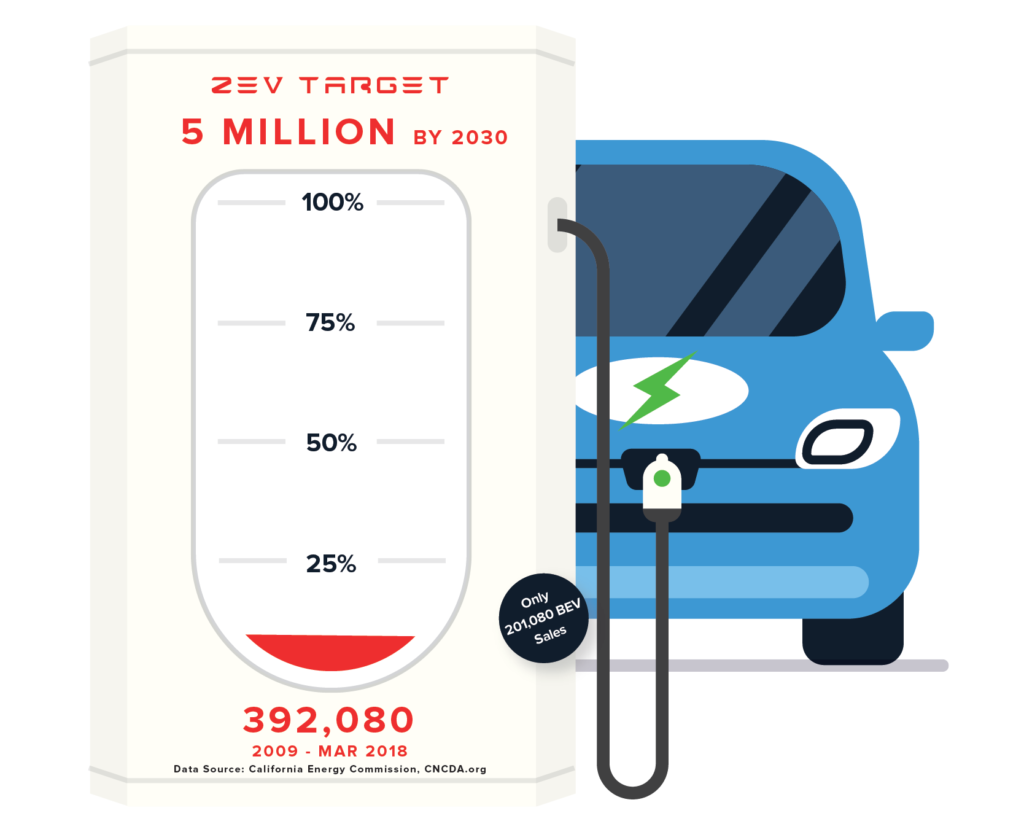