The latest new vehicle sales data from California New Car Dealers Association indicates that sales once again exceeded 2 million units for the year. Although slowing 2.2% from the prior year, this indicator reflects the level of overall consumer confidence and continuing strength of the recovery. New vehicle sales are also a critical indicator of state and local revenues, with Motor Vehicle and Parts Dealers (NAICS 441) producing 13.1% of total sales and use tax in the most recent data for the first three quarters of 2017.

Q4 deliveries for battery electric plug-ins (BEVs) continued to rise as Tesla promoted sales based on the pending phase out of federal subsidies along with some compensating shifts in vehicle prices. Other key findings from the data:

PEV Sales Up in 4th Quarter

First, Tesla stopped taking reservations in July 2018 and has since moved to a direct order system, a change that will bring the data closer to its actual trend in the coming quarters as backlogged order deliveries catch up. Second, both Tesla and GM are now entering the phase-out period for federal subsidies, and the true market potential will become more apparent as this price distortion is removed.

Finally, Tesla’s pricing continues to place its vehicles in the Near Luxury and above market segments. With BEV sales consequently being driven by higher income buyers engaged at this level, longer term sustainability of market share still is dependent on models at price levels for middle income buyers including Tesla’s goal of $35,000. Even at this level though, state and local taxes and fees will tack on additional charges in the $3,000 to $4,000 range depending on location, leaving out-of-pocket costs still close to the $40,000 level even before considering any optional packages.

Rather than only true ZEVs, the numbers in the Executive Order and previous interpretations by the agencies indicate the goal is to be achieved by both BEVs that run only on electricity and plug-in hybrids (PHEV) which are combustion vehicles that run on both electricity and motor fuels. Consequently, only a portion of the vehicles being counted to meet the zero emission goal—roughly half based on current sales volumes—will in fact produce zero emissions when driven. Additionally, FCEVs (fuel cell electric vehicles) also would count towards the ZEV total, but CNCDA data show total market share for these vehicles to date at only 0.1%.

Using this more flexible interpretation that includes both true ZEVs and combustion PHEVs, total PEV sales since 2009 account for 10.5% of the 2030 goal. True ZEV sales, however, account for only 5.6%.

The Executive Orders, however, also refer to ZEVs on California roads, while the agency accountings concentrate on sales. Using prior Energy Commission reviews to account for ZEVs no longer on the roads as a results of accidents, moves out of state, and other factors that over time remove vehicles from the active fleet, the actual progress rate consistent with the Executive Order language of “vehicles on California’s roads” would be 9.6% rather than the 10.5% shown in the chart below.

Accounting for normal fleet turnover rates and reductions from persons moving out of California, PEV sales would need to be 2.9 times higher to meet the 2030 goal. True ZEV sales would have to be 5.0 times higher. These numbers assume, however, that the current market share will remain elevated above the long-term average. 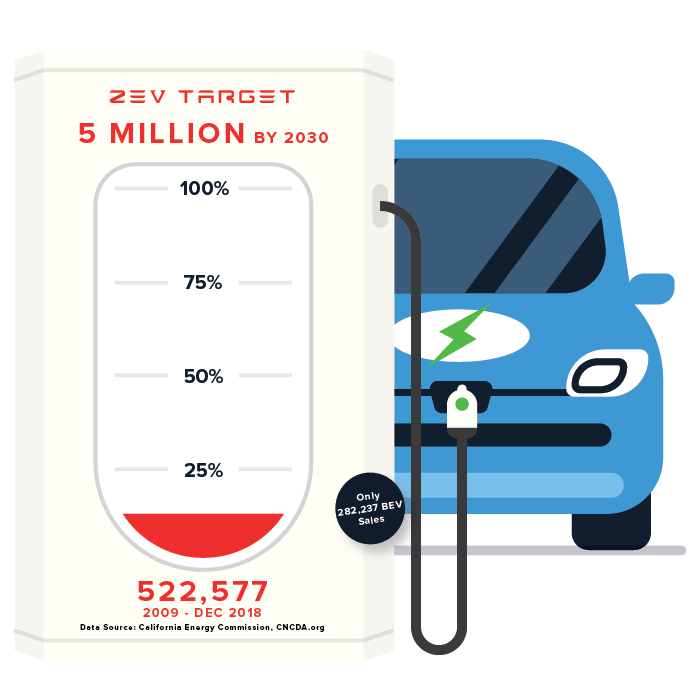