The latest new vehicle sales data from California New Car Dealers Association indicates that sales are now projected to be above 1.9 million units for the year.  Although slowing 4% from the prior year, this indicator reflects the level of overall consumer confidence and continuing strength of the recovery. New vehicle sales are also a critical indicator of state and local revenues, with Motor Vehicle and Parts Dealers (NAICS 441) producing 13% of total taxable sales in the most recent data for the first quarter in 2018.

Light Trucks at 56% of Sales

Rather than only true ZEVs, the numbers in the Executive Order and previous interpretations by the agencies indicate the goal is to be achieved by both BEVs that run only on electricity and combustion PHEVs that run on both electricity and motor fuels.  Consequently, only a portion of the vehicles being counted to meet the zero emission goal—roughly half based on current sales volumes—will in fact produce zero emissions when driven.  Additionally, FCEVs (fuel cell electric vehicles) also would count towards the ZEV total, but CNCDA data show total market share for these vehicles to date at around 0.1%.

Using this more flexible interpretation that includes both true ZEVs and combustion PHEVs, total PEV sales since 2009 account for 11.2% of the 2030 goal.  True ZEV sales, however, account for only 6.2%. 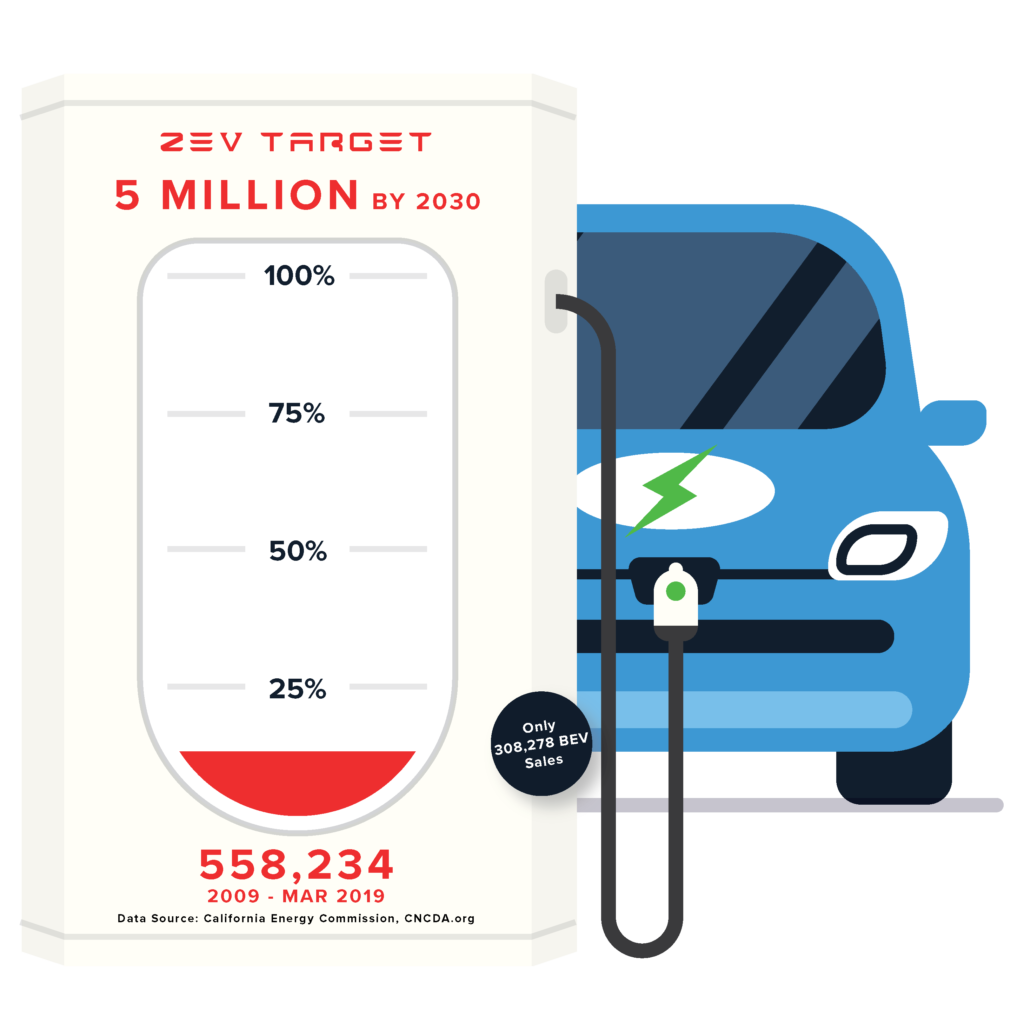 Disparity Between Vehicle Sales & Vehicles On the Road

In addition to the distortion that comes from including combustion vehicles in the ZEV total, the Executive Orders also refer to ZEVs on California roads while the agency accountings rely on sales as the measure of progress.  Using prior Energy Commission reviews to account for ZEVs no longer on the roads as a result of accidents, moves out of state, and other factors that over time remove vehicles from the active fleet, the actual progress rate consistent with the Executive Order language of “vehicles on California’s roads” would be 10.3% rather than the 11.6% shown in the chart below.

Carpool lane sticker data, however, suggests the differences may be even higher.  As part of the overall subsidy packages available to ZEV buyers, the state also issues Clean Air Vehicle (CAV) stickers that allow single-occupant ZEVs to use carpool lanes.  Qualifying ZEV models change periodically, in particular PHEVs that no longer meet the overall emission standards issued by the Air Resources Board.   Currently, purple decals are issued for ZEVs purchased after January 1, 2019.  Red decals were issued for vehicles previously having a white (BEV) or green (PHEV) sticker and purchased in 2017 or 2018.  Owners of vehicles eligible for a red decal received a pre-filled in application which only needed to be signed and mailed to DMV with the $22 fee.

Comparing the DMV sticker data to the sales numbers suggests the actual number of ZEVs “on California’s roads” are lower.  As shown in the table below, the number of purple stickers issued closely matches the first quarter PEV sales.  The discrepancy arises primarily from the fact that the DMV data is from April 10 and includes 10 more days of sales than the Q1 data.

PEVs in general are sold more to higher income, relatively more mobile households.  Especially with continuing shifts of expansions and some current operations by key higher-wage industries such as Tech, Information, and Finance to other states, PEVs owned by their higher income employees may be shifting as well.  The previous drop-off rates estimated by the Energy Commission may be too low, and the actual number of PEVs “on California roads” likely lower than shown in the adjusted numbers above.

Various analyses in the past have assessed the extent to which PEVs remain a higher income product, and the degree to which these vehicles have been expanding to moderate and lower income consumers.  Early analyses were based on detailed income, location, and demographic information that is no longer compiled.  Subsequent ones looked at location data from the state’s vehicle rebates, but this information has covered a much smaller portion of overall PEV sales since implementation of the income limits.

In the charts below, the DMV zip code sticker data was converted into a uniform household penetration rate, with the calculation using the total stickers within each district and an estimated number of households from the statewide number of persons per household.  The results were then graphed against per capita income (2017) for each district.  The percentage of households estimated to have a PEV is overall an average rate as some households have more than one PEV. 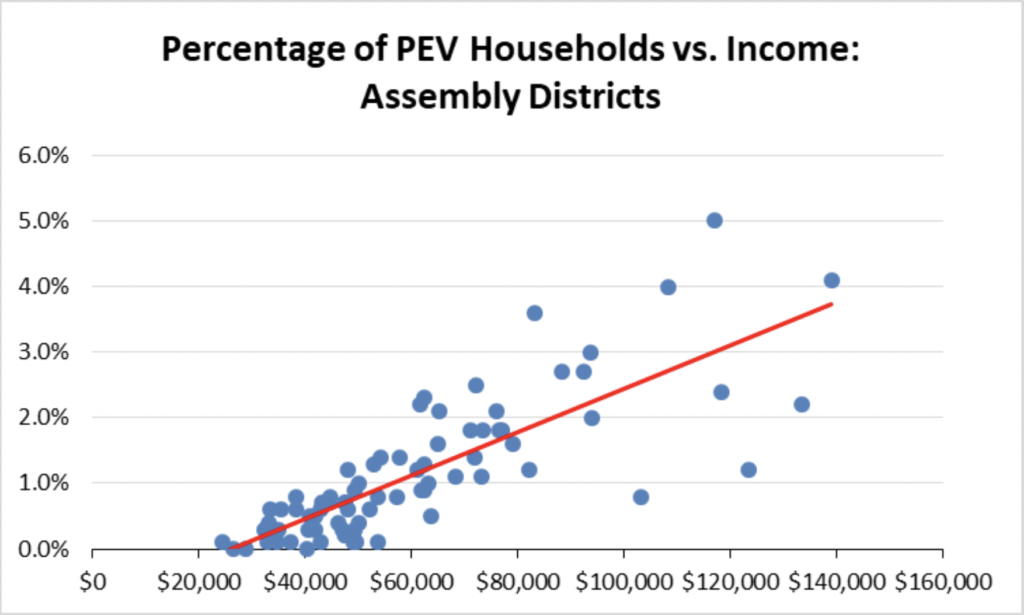 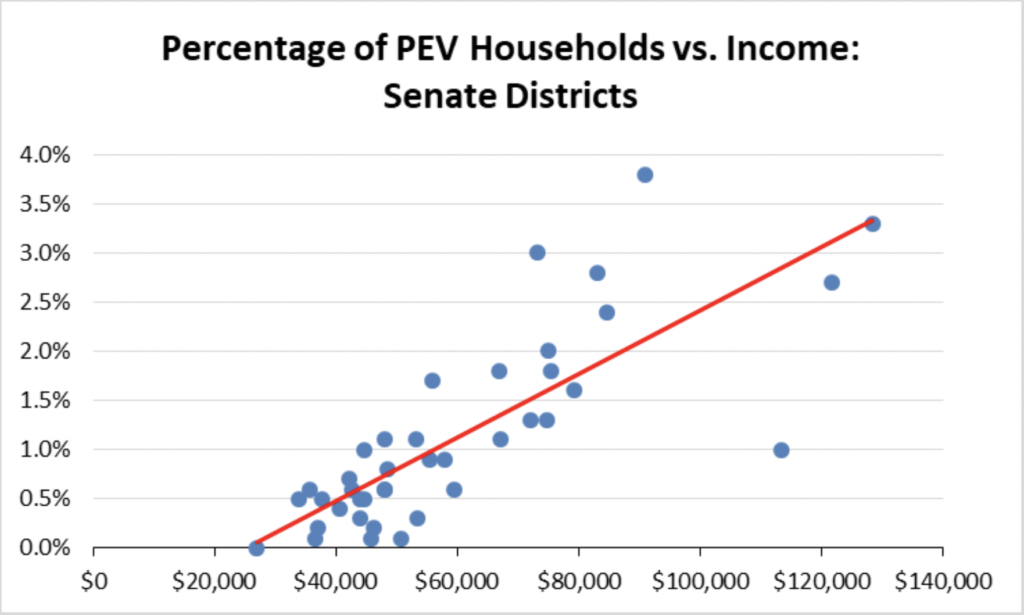 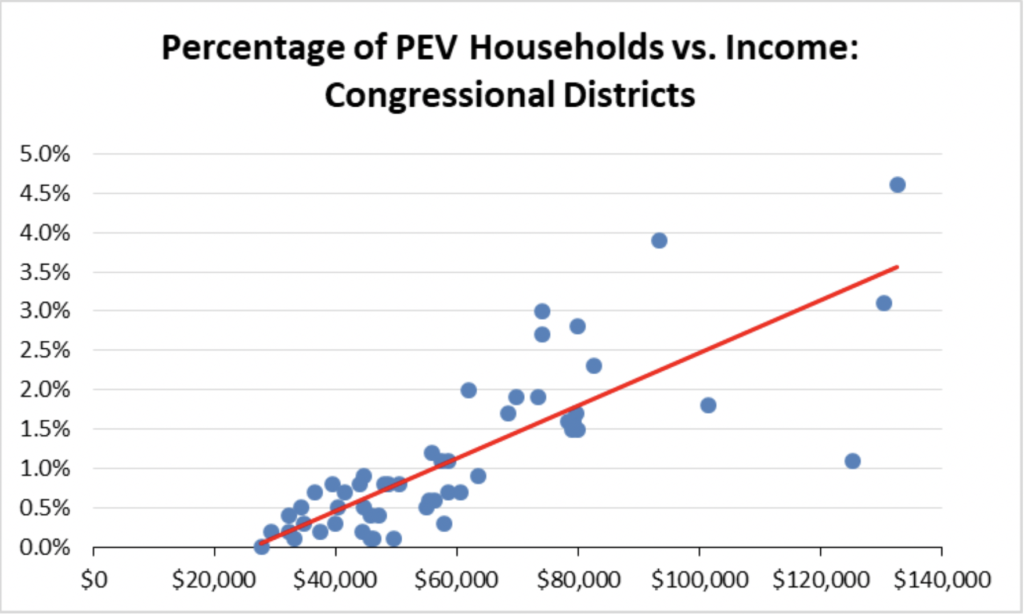 In February, the Center released a report assessing the risk to the state’s economy from potential shortfalls in the supply of battery critical materials, in particular cobalt.  Tesla—which relies on lower cobalt battery chemistries—subsequently stated its own concerns over future supplies of critical materials including battery-grade nickel, copper, and lithium.   Potential expansion of PEV sales in accordance with the Executive Orders and current state policy—at the same time other nations are pursuing similar goals—will be tempered by whether equivalent actions to address these supply issues and the growing dependence on unsecure sources will also be addressed.

In its most recent commodities production reports, US Geological Survey indicates world cobalt supplies have become even more concentrated within a single source.  As shown in the chart below, revised mine production numbers for 2017 indicate the global share from Democratic Republic of the Congo (DRC) rose to 61%.  Initial production estimates for 2018 show the DRC share rising even further to two-thirds of the world’s supply.  USGS estimates that production in all other countries combined declined. 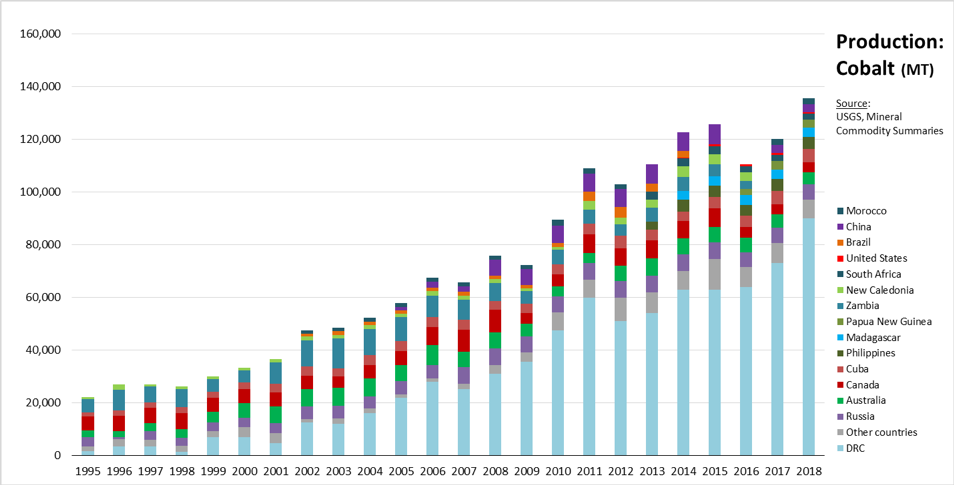 As detailed in the Center’s report, DRC is a highly volatile nation, with official corruption and virtually unceasing internal and external conflicts frequently disrupting supply flows from its mining sector.  More critically, previous reports from Amnesty International and other NGOs have documented frequent abuses associated with the use of child labor, lack of worker safety, and environmental damage from artisanal mining along with mistreatment of women and other disenfranchised populations in the associated mining communities which are frequently run by rebel militia and elements of both the national and foreign militaries.  Artisanal mining is estimated to provide about 20% of total DRC cobalt production.

ZEV and ZEV component producers requiring new facilities have instead gone to other states and countries providing the timing certainty on development decisions required by such a rapidly changing industry.  Tesla chose Nevada for its Gigafactory 1 for this reason.  Announcements from other companies since the last quarter include: