The latest new vehicle sales data from California New Car Dealers Association indicates that sales are still projected to be under 2 million units for the year, slipping below sales in the prior four years but still well above historical levels.  While slowing, this indicator reflects the level of overall consumer confidence and continuing strength of the recovery.  New vehicle sales are also a critical indicator of state and local revenues, with Motor Vehicle and Parts Dealers (NAICS 441) producing 13% of total taxable sales in the most recent data for the first quarter in 2018.

As part of the AB 32 climate change program, Executive Order B-48-18 administratively created a goal of 5 million zero-emission vehicles (ZEVs) on California roads by 2030. This action expands on the prior Executive Order B-16-2012, which set a goal of 1.5 million by 2025, with a sub-goal that their market share is expanding at that point. While these goals were set administratively, they are embodied in the state’s climate change strategies, and both public and utility ratepayer funds are being used to create the refueling infrastructure required for these motorists.

Rather than only true ZEVs, the numbers in the Executive Order and previous interpretations by the agencies indicate the goal is to be achieved by both BEVs that run only on electricity and combustion PHEVs that run on both electricity and motor fuels. Consequently, only a portion of the vehicles being counted to meet the zero emission goal—roughly half based on current sales volumes—will in fact produce zero emissions when driven. Additionally, FCEVs (fuel cell electric vehicles) also would count towards the ZEV total, but CNCDA data show total market share for these vehicles to date at around 0.1%.

Using this more flexible interpretation that includes both true ZEVs and combustion PHEVs, total PEV sales since 2009 account for 11.9% of the 2030 goal. True ZEV sales, however, account for only 6.7%. 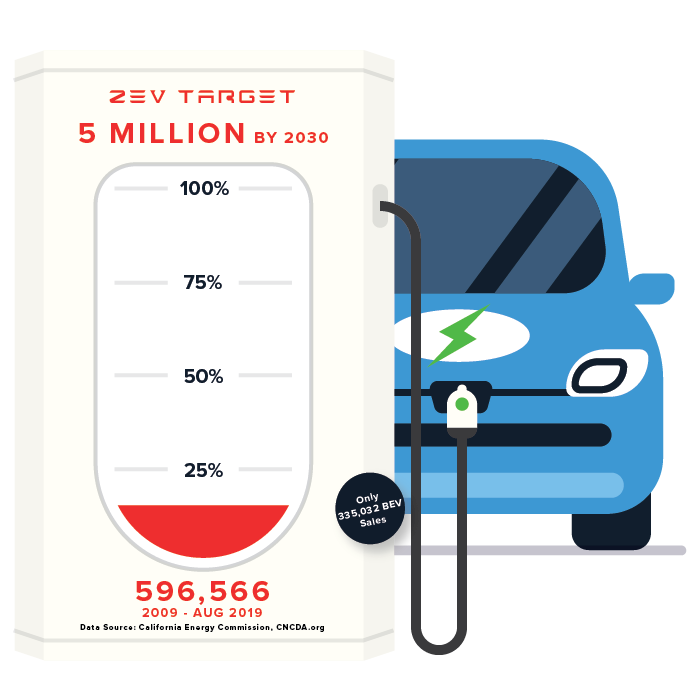 In addition to the distortion that comes from including combustion vehicles in the ZEV total, the Executive Orders also refer to ZEVs on California roads while the agency accountings rely on sales as the measure of progress. Using prior Energy Commission reviews to account for ZEVs no longer on the roads as a result of accidents, moves out of state, and other factors that over time remove vehicles from the active fleet, the actual progress rate consistent with the Executive Order language of “vehicles on California’s roads” would be 11.0% rather than the 11.9% shown in the chart below.

As discussed in the Q1 2018 report, carpool lane sticker data, however, suggests the differences may be even higher. While the “purple” decal numbers for cars bought beginning in 2019 track closely with the PEV sales since January, the “red” decal numbers for cars bought in prior years cover only 59% of PEVs sold in the applicable period. This discrepancy suggests a much higher turnover of PEVs “off California’s roads” than in prior estimates.

Like many other statements concerning job creation associated with the state’s environmental and energy policies, these provisions related to ZEVs primarily consist of promises with little in the way of concrete action to shift the other state policies and regulations standing in the way of creating these types of permanent jobs within the state. California does have a significant ZEV production presence from Tesla, but Tesla located here primarily because of the availability of a vacant vehicle production facility that was fully permitted and constructed. California previously had several such facilities, but instead of being repurposed to create new manufacturing jobs, they were instead mined to produce air quality emission credits.

ZEV and ZEV component producers requiring new facilities have instead gone to other states and countries providing the timing certainty on development decisions required by such a rapidly changing industry. Tesla chose Nevada for its Gigafactory 1 for this reason. Announcements from other companies since the last quarter include: