The latest new vehicle sales data from California New Car Dealers Association  indicates that sales are still projected to be just over 1.9 million units for the year, slipping below sales in the prior four years but still well above historical levels.  While slowing, this indicator reflects the level of overall consumer confidence and continuing strength of the recovery.  New vehicle sales are also a critical indicator of state and local revenues, with Motor Vehicle and Parts Dealers (NAICS 441) producing 12% of total taxable sales in the most recent data for the second quarter in 2019.

Light Trucks at 59% of Sales

Rather than only true ZEVs, the numbers in the Executive Order and previous interpretations by the agencies indicate the goal is to be achieved by both BEVs that run only on electricity and combustion PHEVs that run on both electricity and motor fuels.  Consequently, only a portion of the vehicles being counted to meet the zero emission goal—roughly half based on current sales volumes—will in fact produce zero emissions when driven. Additionally, FCEVs (fuel cell electric vehicles) also would count towards the ZEV total, but CNCDA data show total market share for these vehicles to date at around 0.1%.

Using this more flexible interpretation that includes both true ZEVs and combustion PHEVs, total PEV sales since 2009 account for 12.7% of the 2030 goal.  True ZEV sales, however, account for only 7.2%. 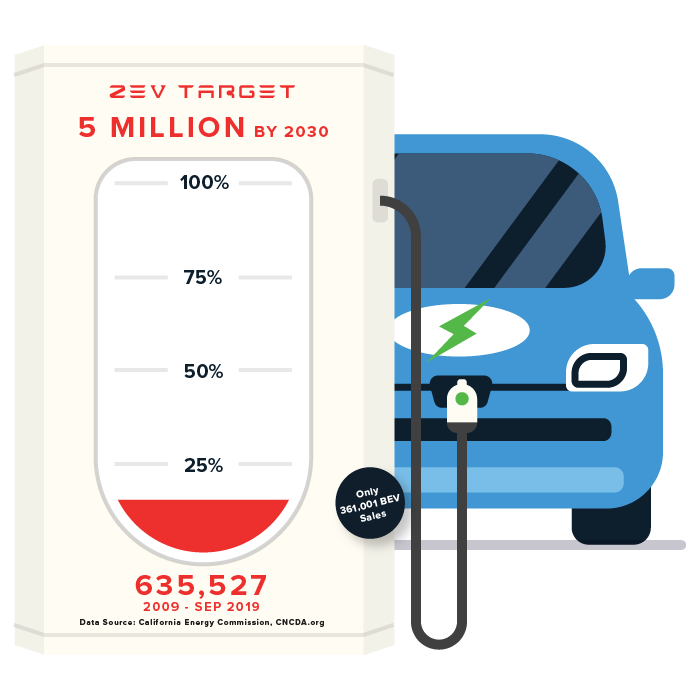 In addition to the distortion that comes from including combustion vehicles in the ZEV total, the Executive Orders also refer to ZEVs on California roads while the agency accountings rely on sales as the measure of progress.  Using prior Energy Commission reviews to account for ZEVs no longer on the roads as a result of accidents, moves out of state, and other factors that over time remove vehicles from the active fleet, the actual progress rate consistent with the Executive Order language of “vehicles on California’s roads” would be 11.7% rather than the 12.7% shown in the chart below.

As discussed in the Q1 2018 report, carpool lane sticker data, however, suggests the differences may be even higher.  While the “purple” decal numbers for cars bought beginning in 2019 track closely with the PEV sales since January, the “red” decal numbers for cars bought in prior years cover only 59% of PEVs sold in the applicable period.  This discrepancy suggests a much higher turnover of PEVs “off California’s roads” than in prior estimates.

The availability of a fully permitted and quick-to-operational facility in Fremont has at least made it possible for California to come close to catching back up with the rest of the country in vehicle-related employment.  As shown in the chart below, California employment in the related industries (NAICS 3362 Motor Vehicle Manufacturing, 3362 Motor Vehicle Body & Trailer Manufacturing, and 3363 Motor Vehicle Parts Manufacturing) in the most recent 2019 Q1 data was 47% above the level in 2010 Q1, somewhat below the equivalent figure for the other states which came in 53% higher.  Rather than making California an electric vehicle manufacturing center, this relative performance reflects the fact that other states are doing as well or better in securing these jobs. 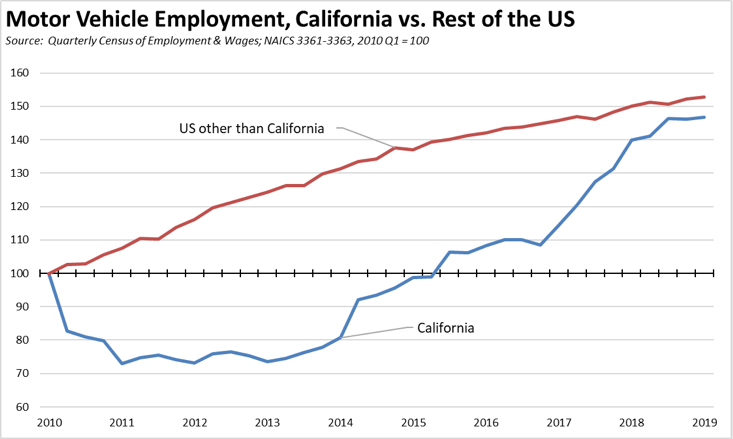 California’s gains much like the overall progress to date on the ZEV goals relied heavily on a single producer, Tesla, and to a great extent a single model, the Model 3, as shown in the employment upsurge beginning in 2017 but that has leveled off in the past 3 quarters.

California essentially gave birth to the modern electric vehicle industry through regulations issued in 1990.  The state’s failures to enact the required reforms necessary for a stronger manufacturing presence has instead seen this industry the state created increasingly concentrated in China.  And as China continues to expand its near monopolistic control over the battery production needed to fuel these vehicles, this concentration is only slated to grow more intense in the years to come.