The proposed minimum wage expansion (SB 3) contains two triggers under which a governor may—but is not required to—delay a programmed minimum wage increase by one year. These provisions are intended to mitigate state budget costs in the event of a future recession, which Governor Brown repeatedly and most recently in the January Proposed Budget has warned as being “an event not too far off given the historic pattern of the ten recessions that have occurred since 1945.”

The triggers in SB3 are defined by two factors:

A programmed and subsequent minimum wage increase may be delayed by one year using either trigger. The economic trigger may be used at any time, but the proposal limits the budget trigger to a maximum of two uses. The following chart illustrates the potential of these triggers using data over the past two recession periods: 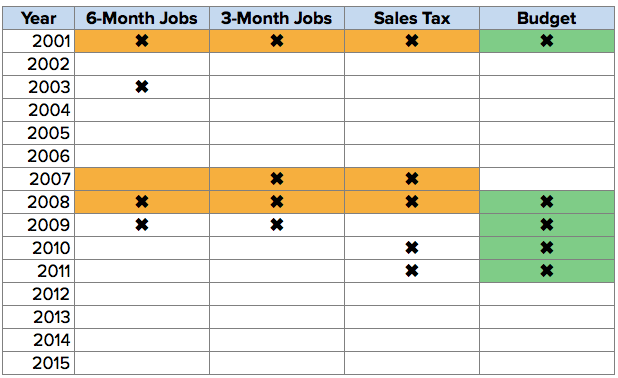 Note:  The colored bars show the year in which the trigger conditions are met, making a 1-year delay possible in the following year.

More critically, however, the triggers are designed to delay programmed increases by only one year. This situation means that should the inevitable next recession occur during the phase-in period of this legislation, both the budget and hiring will gain a temporary respite after the state has entered an economic downturn. However, the state will then resume raising its wage level above other states just as the recovery begins—a time when competitive factors will be particularly crucial to how quickly the state can restores its economy.

The previous two recessions illustrate two cases. In the first case, most of the country went through a relatively short 2001 recession, but in California it was extended due to Silicon Valley being the epi-center of the dot.com bust and spiking energy prices as a result of the state’s regulatory and other energy policy decisions. While the triggers would have provided a one-year delay in 2002, the minimum wage would have continued its annual increase as unemployment continued to rapidly rise from an average of 5.4% in 2001 to a peak of 7.3% in 2003.

The second case is the most recent recession which illustrates the effects on a more-prolonged recovery period. The table shows the economic trigger could have been applied for two years in the fall of 2007 at the start of the impending downturn. The budget trigger—if not previously used at the start of the downturn—then could have been applied for an additional two years during that time. The minimum wage increases would have resumed in 2012 when unemployment still averaged 10.4% or even earlier in 2011 when unemployment averaged 11.7%. Most importantly, the minimum wage increases would have kicked back in during the critically important 5 year recovery period where California slowly struggled to regain the two million jobs lost throughout the state.

The data in the chart above is derived from the following sources: