California is facing a new reality. Companies are leaving the state and relocating, redistributing, or centralizing operations and jobs through business centers in other states.

For the past two decades, California’s economic growth has been dominated by the tech industry, centralized nearly exclusively in the Bay Area. This region accounted for almost 40 percent of all employment growth since the 2008 Great Recession and has directly contributed to our record state surplus and increased funding of government services, including education.

At the same time, California policies have created the highest in the nation cost-of-living and strictest in the nation regulatory costs which have caused jobs in key sectors such as manufacturing to start-up, scale or relocate in other lower-cost states, sometimes just across the border from California. 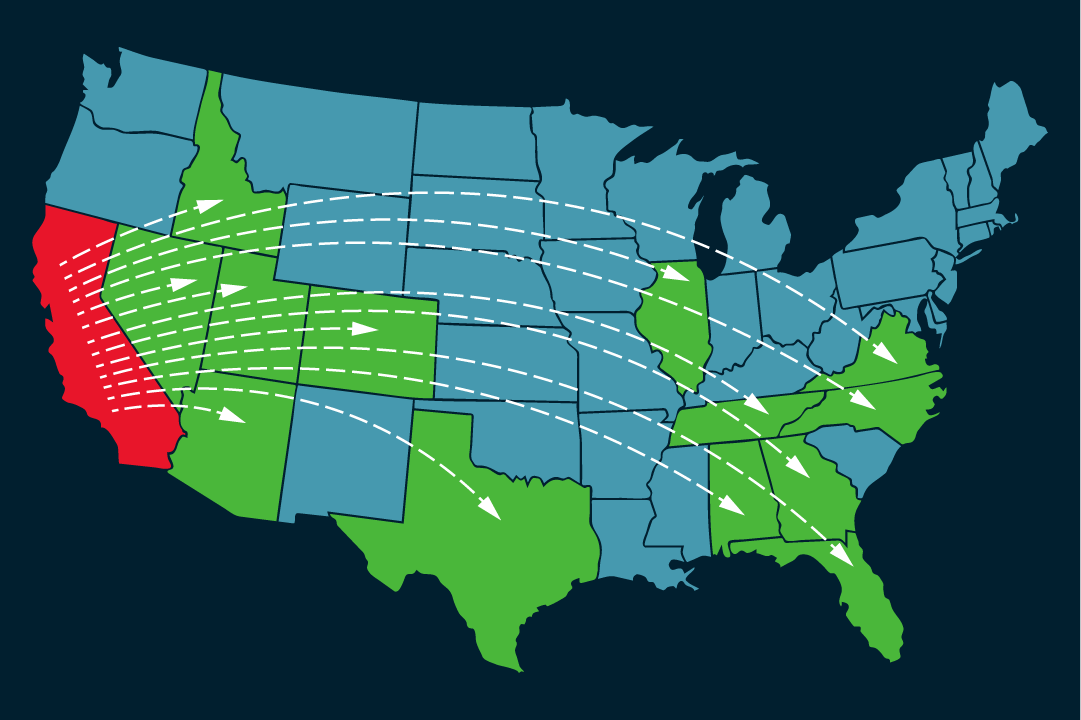 The result of the investments from these competing states and the tech industry itself have transformed other states’ economies into new and more competitive tech hubs. With these new and burgeoning hubs established, an increasing number of tech businesses, and the state taxes they and their employees pay California each year, are now leaving.

One of California’s most important strategic economic advantages has been as the national leader in venture capital funding. But now we are starting to document migration in that sector as well, undermining one of the powerful incentives that have kept tech, and other industries, cemented in California. Teleworking is an important workplace advantage in the tech sector, but ironically teleworking options created by the COVID-19 pandemic are accelerating the trends observed for the past several years—California is quickly losing its dominance in the tech economy as tech centers rise in other states and as telework allows their workers to choose where they want to live and what costs of living they are willing to pay.

Putting a number on how many jobs are moving from the state is a challenge as companies do not always provide this information, and the extent of telecommuting workers moving outside the state is just starting. The issue is further complicated by the fact that moving jobs out of California can take one of several forms: (1) a company may move all of its operations, as is the case for some of the companies listed below as moving their headquarters to another state; (2) companies may move a portion of their operations, in particular back-office functions that can be performed anywhere, and often these moves are made without a public announcement; (3) companies may choose to expand in other states rather than other regions of the state as they have done in the past, and the movement of jobs, in this case, is through lost opportunities; and (4) increasingly workers are taking on this decision by themselves and choosing to move to areas with lower costs of living while retaining their jobs through telecommuting.

There also is frequently a lag between a company announcing a move and a change of employment levels within the state.

As we look to the future of our post-pandemic economy, the shift of the tech industry and the movement of its executives and investors will significantly impact the stability and solvency of our General Fund since the state’s progressive tax structure relies heavily on taxes paid by California’s highest earners.

As part of its commitment to track trends in the economy and the impact these trends have on jobs and the state’s broader fiscal health, the Center is now tracking the “CaliFormers,” businesses that have left the state for lower-cost, lower-regulated states.

This site will be regularly updated as other companies announce their departures.