Below are the monthly updates from the most current 2022 fuel price data (GasBuddy.com) and February 2022 electricity and natural gas price data (US Energy Information Administration).

The latest data continues to reflect the increase in crude oil and natural gas prices, with the 2nd highest gasoline prices on record in California. More troubling for inflation prospects, diesel—a critical fuel for food production and delivery of goods and services—prices continued rising to their highest.

The steep and currently sustained rise in fuel prices has led to a number of relief proposals at both the federal and state level, although the previous proposals in California now appear to have been put on hold after failing to meet the required deadline.  Additional proposals are likely, and a number of federal proposals continue to be considered due to the high concern over the effects of fuel prices on household disposable incomes as well as growing inflation.

A core difference, however, is that California households have already been through the fuel price increase now being felt in the rest of the country. The following chart shows average gasoline prices in California compared to the rest of the US for comparable 12-month periods running from May to the latest data in April. As shown, the price trend households and employers faced in the current (2021-22) 12-month period is essentially the same those in California were subjected to in the previous (2020-21) 12-month period. The cost surge that is now raising understandable alarms at the federal level is something Californians have already been through without any comparable calls for relief from the state or reviews of the policies that produced it. 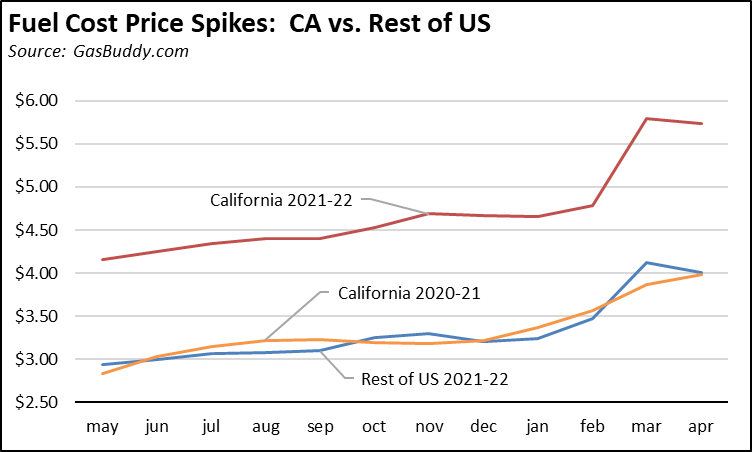 A more relevant key difference likely lies in why those alarms are being raised. The current surge in prices is the result of global market disruptions caused by actions by Russia. The 2020-21 experience in California and at least a portion of the most recent results are the result of actions by state policy and regulations that chose to increase fuel costs to Californians with little to no consideration of the eventual effects to the costs of living and the costs of doing business.

As global markets stabilize, the rest of the country is likely to see prices return to at least some approximation of normal. California’s policies and regulations, however, will keep prices well above the recent national peaks behind the calls for action in Washington and likely continuing to climb even higher.

Inflation Rising to Highest Since 1982

California vs. US Fuel Price Gap at 42.9% Premium

$1.72
Price Per Gallon
Above US Average
(CA Average)

The average price per gallon of regular gasoline in California eased 6 cents from March to $5.73. As prices in the rest of the country eased somewhat more, the California premium above the average for the US other than California ($4.01) rose to $1.72, a 42.9% difference.

In April, California again had the highest gasoline price among the states and DC. Californians paid $2.00 a gallon more than consumers in Missouri, the state with the lowest price.

$1.32
Price Per Gallon
Above US Average
(CA Average)

The average price per gallon of diesel in California rose 10 cents from March to $6.36. The California premium above the average for the US other than California ($5.04) rose to $1.32, a 26.1% difference.

In April, California again had the highest diesel price among the states and DC.

$1.82
Price per Gallon
above US Average
(Los Angeles Region)

California average Residential Price for the 12 months ended February 2022 was 23.22 cents/kWh, 76.4% higher than the US average of 13.16 cents/kWh for all states other than California. California’s residential prices again were the highest among the contiguous states.

Residential bills, however, vary widely by region, with the estimated annual household usage in the recently released data for 2020 as much as 78% higher in the interior regions compared to the milder climate coastal areas, and substantially higher when comparing across counties.

$9.1b
Premium Above
US Average Price

For the 12 months ended February 2022, California’s higher electricity prices translated into Residential ratepayers paying $9.1 billion more than the average ratepayers elsewhere in the US using the same amount of energy.

California average Commercial Price for the 12 months ended February 2022 was 19.45 cents/kWh, 83.7% higher than the US average of 10.59 cents/kWh for all states other than California. California’s commercial prices again were the highest among the contiguous states.

California average Industrial Price for the 12 months ended February 2022 was 15.23 cents/kWh, 122.0% higher than the US average of 6.86 cents/kWh for all states other than California. California’s industrial prices again were the 3rd highest among the contiguous states.

$13.7b
Premium Above
US Average Price

Average prices ($ per thousand cubic feet) for the 12 months ended February 2022 and changes from the previous 12-month period for each end user are shown below. In February, California residential rates again were the 4th highest among the contiguous states, 6th highest for commercial rates, and 3rd highest for industrial rates.