Below are the monthly updates from the most current October 2020 fuel price data (GasBuddy.com) and August 2020 electricity and natural gas price data (US Energy Information Agency). To view additional data and analysis related to the California economy visit our website at www.centerforjobs.org/ca.

Energy use provides another indicator of the effects coming from the current shutdowns related to the pandemic. In the period April through August, residential electricity use in California was up 12.4% from the comparable period in 2019, indicating yet another measure of the extent to which telecommuting has sustained a significant portion of the economy under the current crisis conditions. In contrast, commercial electricity use was down 10.2%, reflecting the impact of the closure orders, while industrial use was largely unchanged. The rest of the country, however, showed considerably lower effects, with residential use largely unchanged, commercial use down 3.9%, and industrial down 4.8%.

As reflected in the numbers below, the costs of energy in California continue to rise relative to the rest of the nation as a result of state regulations. In the current circumstances, these growing costs continue to impose a disparate burden to the lower wage households who have seen the highest loss of jobs as a result of the state-ordered closures. Their incomes are down, but the energy-related costs of housing and transportation continue to rise. This growing cost of living and cost of business component will also remain a barrier to household and employment recovery in the coming period.

Our August Energy Report estimated that the state’s climate change regulations now cost California households and employers $44 billion more a year when the cost of energy is compared to the average for the other states, and more if the consumption levels had been closer to the pre-COVID levels. This estimate is also based on a comparison to the average prices in the rest of the US and does not take into account the state’s ability in the past to provide reliable energy at lower prices, contributing to the state’s competitiveness in the past for both residents and businesses.

But as indicated in that report, the additional cost of $44 billion a year is not the cost of a climate change program. It is the cost of the way the state has chosen to pursue its program, relying heavily on a constantly expanding—even under the current unprecedented health and economic crisis conditions—body of regulations.

The recent Air Resources Board release of the emissions inventory for 2018 provides an update to the performance of the state’s regulation-heavy approach to climate change compared to the more cost-considered solutions pursued largely in the rest of the country.

California emissions saw an uptick in 2018, similar to but at a lower level than for the US as whole. California’s total included emissions were 1.3% below the 1990 level. The US was 3.7% above, indicating as in prior years that progress on the national level has trailed California by only 1 to 2 years. Overall in the period covered by the current inventory, progress in reducing climate change emissions has differed little in outcomes between California and the US. The only difference has been the substantially higher costs California has imposed to achieve those outcomes. 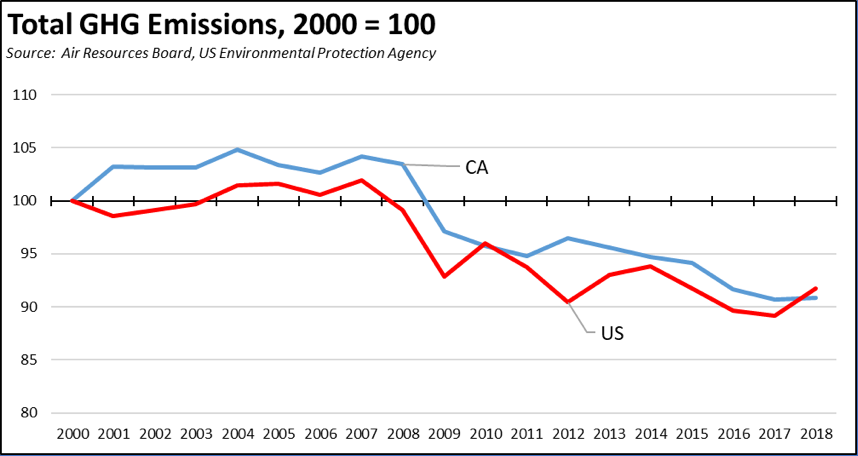 While there are some differences in how each agency calculates the emission inventories reflected in the chart, both are done in conformance with IPCC requirements. Differences in core elements include the following considerations: 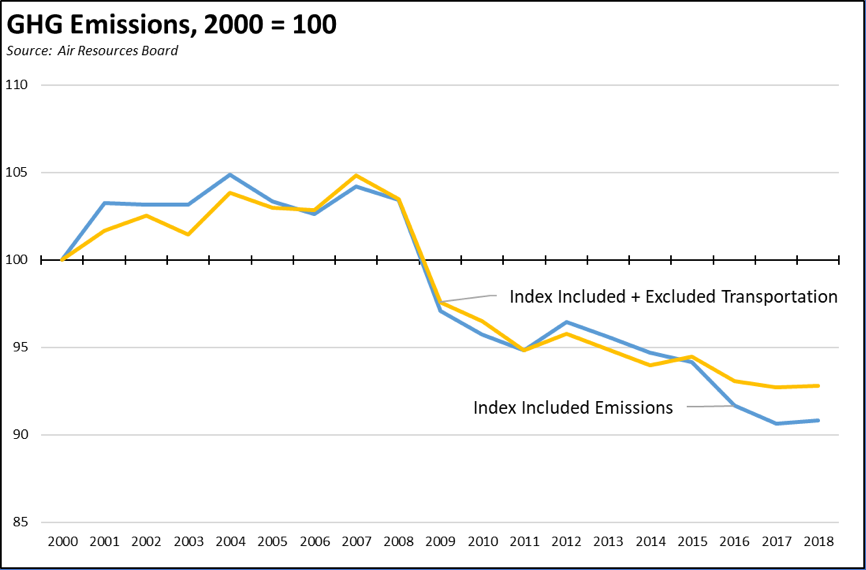 The second element as sharply illustrated this year are emissions from wildfires which in many years exceed whatever reductions are gleaned from the state’s regulations and their associated high costs on residents and employers. The following chart illustrates this point by combining the Air Board inventory’s included emissions along with the preliminary estimates of CO2 emissions from annual wildfires. In spite of the potential of wildfires to fully negate if not exceed the costly reductions achieved through the state’s regulations, reducing the incidence and severity of fires remains a relatively low priority under the cap and trade spending program, the primary source of discretionary funds to reduce climate change emissions in the state. Using the 2019-20 budget bill as a more representative allocation, reducing wildfire threats was allocated only 7% of the $2.9 billion Expenditure Plan. The approved spending instead was heavy with elements that contained only minimal to no emissions reduction potential including $1.3 billion for transit, High-Speed Rail, and the Strategic Growth Council. 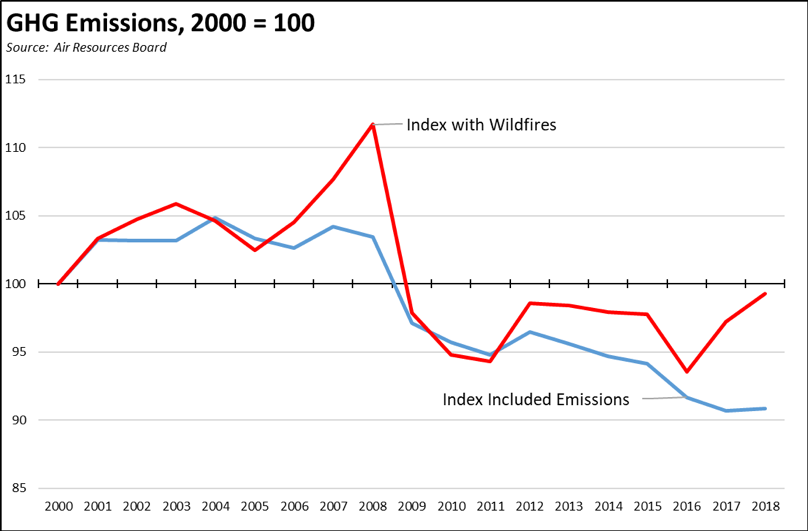 While the most current data shows an uptick in emissions in 2018, the longer-term trend shows continued reductions from the state’s efforts. These reductions, however, are little different than what the country as a whole has achieved in the same period at far lower cost, and the progress for California is only in the emissions that are included in the reporting and not the full outcomes from the state’s budgetary and policy decisions. The growing costs on households and employers from the state’s chosen approach have to be considered in this context.

California vs. US Fuel Price Gap at 53.7% Premium

The October average price per gallon of regular gasoline in California eased 3 cents from September to $3.20. The California premium above the average for the US other than California ($2.08) remained at $1.12, a 53.7% difference.

In October, California had the 2nd highest gasoline price among the states and DC, behind only Hawaii. Californians paid $1.36 a gallon more (74% more) than consumers in Mississippi, the state with the lowest price.

$1.03
Price Per Gallon
Above US Average
(CA Average)

The October average price per gallon of diesel in California eased 2 cents from September to $3.34. The California premium above the average for the US other than California ($2.31) rose to $1.03, a 44.5% difference.

In October, California had the 2nd highest diesel price among the states and DC, behind only Hawaii.

$1.26
Price Per Gallon
Above US Average
(Central Sierra Region)

California average Residential Price for the 12 months ended August 2020 was 19.74 cents/kWh, 56.3% higher than the US average of 12.63 cents/kWh for all states other than California. California’s residential prices remained the 6th highest in the nation.

$6.5b
Premium Above
US Average Price

For the 12 months ended August 2020, California’s higher electricity prices translated into Residential ratepayers paying $6.5 billion more than the average ratepayers elsewhere in the US using the same amount of energy.

California average Commercial Price for the 12 months ended August 2020 was 17.45 cents/kWh, 74.2% higher than the US average of 10.02 cents/kWh for all states other than California. California’s commercial prices remained the 3rd highest in the nation.

California average Industrial Price for the 12 months ended August 2020 was 14.18 cents/kWh, 125.1% higher than the US average of 6.30 cents/kWh for all states other than California. California’s industrial prices remained the 4th highest in the nation.

For the 12 months ended August 2020, California’s higher electricity prices translated into Commercial & Industrial ratepayers paying $11.6 billion more than ratepayers elsewhere in the US using the same amount of energy.

Average prices ($ per thousand cubic feet) for the 12 months ended August 2020 and changes from the previous 12-month period for each end user: