The Center for Jobs and the Economy has released our initial analysis of the April Employment Report from the California Employment Development Department. For additional information and data about the California economy www.centerforjobs.org/ca.

The April job and employment numbers continued to be positive, with employment showing strong gains comparable to the prior month but nonfarm jobs slowing. Nonfarm jobs (seasonally adjusted) are now only 1.4% below the pre-pandemic peak high in February 2020 compared to the US at 0.8% below. Employment, however, remains further behind at 2.1% below the prior peak, while the US is 0.5% below. 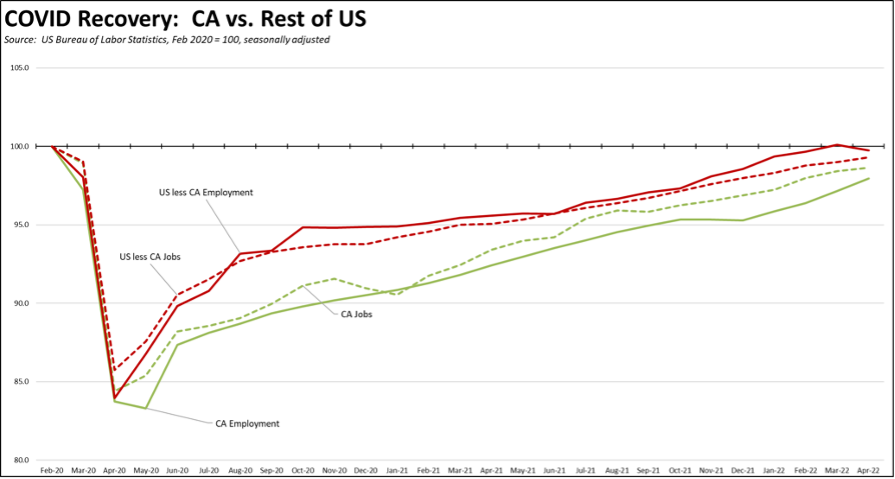 Job gains in California also slowed relative to the other states. California’s gain of 41,400 nonfarm jobs came in third, behind Texas at 62,800 and Florida at 58,600. In terms of recovery to the pre-pandemic levels, California’s position notched down to the 28th highest, while the number of states above the pre-pandemic job levels notched up to 14. 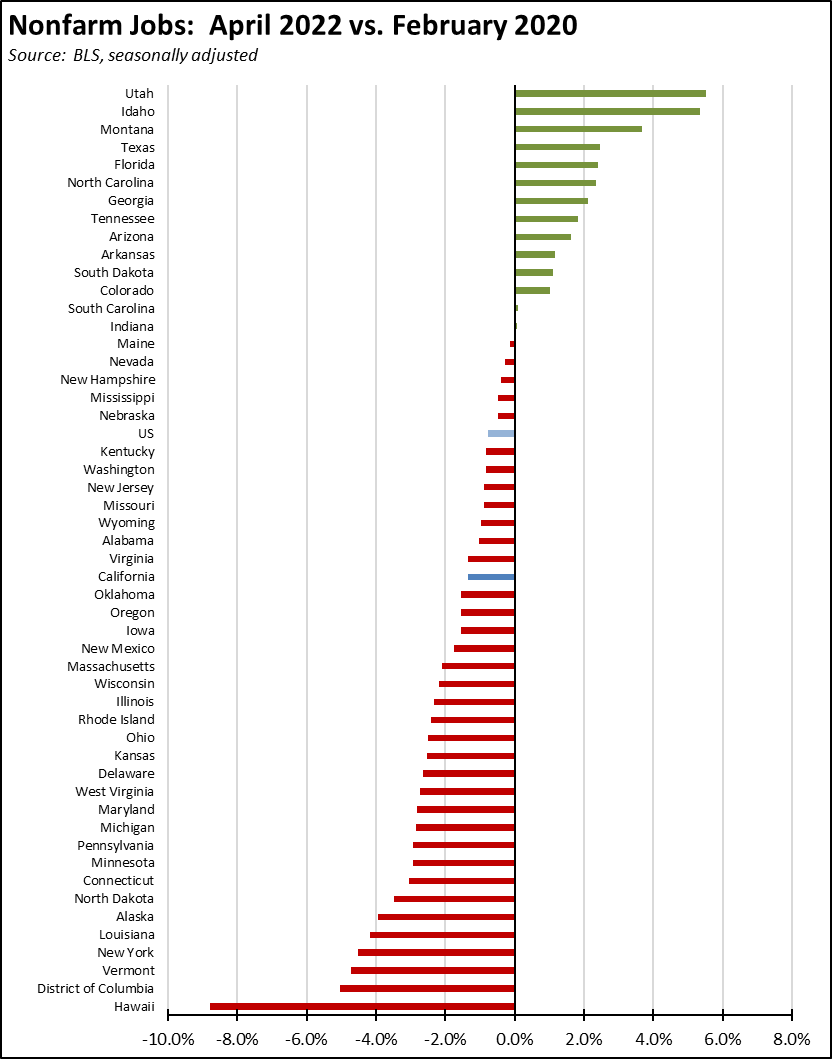 Overall employment levels, however, continued to lag. Despite stronger results in the seasonally adjusted numbers over the past two months, California still only improved marginally to 40th higher, while the number of states showing more people working than before the pandemic grew to 28. The state’s unemployment rate while continuing to improve tied with Illinois for the 6th highest, while 29 states had unemployment rates at or below the February 2020 level. 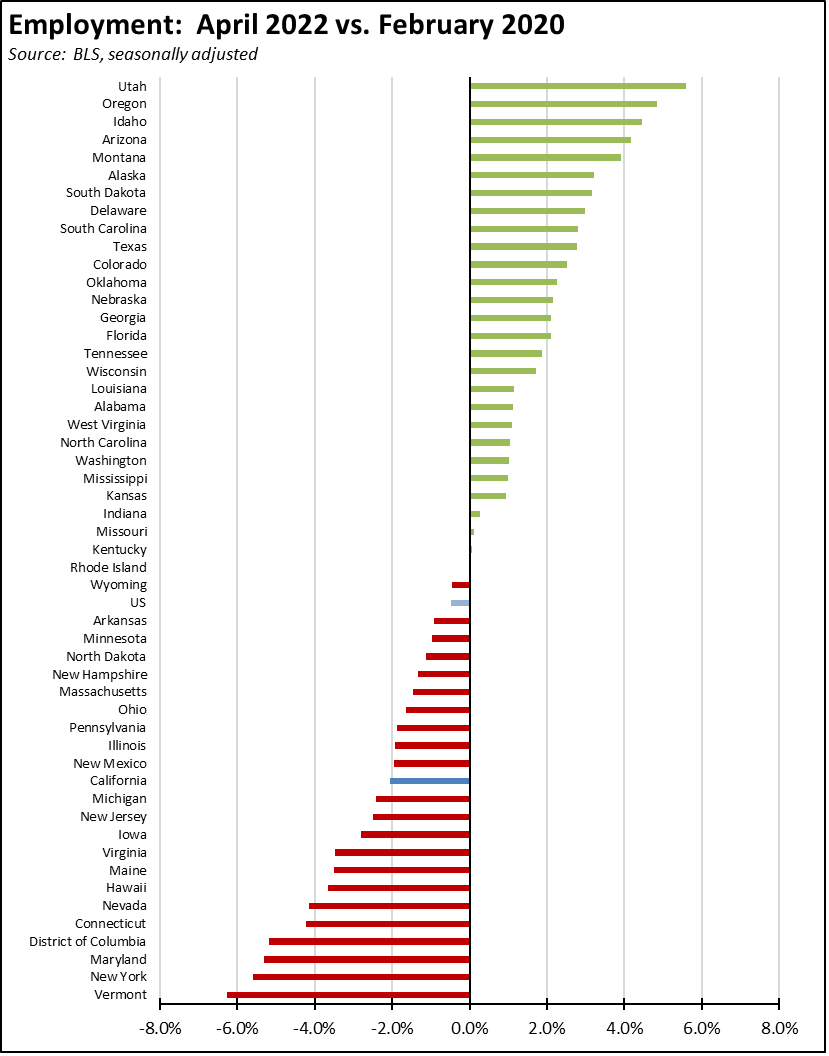 Most of California’s progress over the past several months has been to rebuild the jobs that were lost during the series of state-ordered shutdowns during the pandemic. Jobs were reopened and people returned to work as these restrictions were lifted, but the recovery has been slow and has yet to pass the pre-pandemic stage already reached and exceeded by a growing number of states. California has seen a strong showing in terms of raw numbers—an increase of 925 thousand jobs over the past 12 months—but this outcome was the result of state government no longer telling them to remain closed. With the exception of only a few industries, not the result of endemic growth.

And that number should have been higher—at 1.2 million or higher—to show jobs growth beyond the pre-pandemic level. Jobs recovery in this state, however, continues to be challenged by the state’s high taxes, fees, and expanding regulations behind the growing costs of doing business. Employment recovery continues to lag as state policy continues to focus on paying benefits to ease temporarily the effects of the state’s soaring costs of living, rather than tackling the cause of those cost rises through changes in state policy and regulation.

At the national level, the focus on recovery has now shifted to combatting inflation and increasing concerns over the potential for yet another recession. Still recovering from the last recession, California remains less prepared for this risk.

The reported national numbers show US unemployment rate (seasonally adjusted) was unchanged at 3.6%. Employment was down 353,000, while unemployment was essentially unchanged by dropping only 11,000. The labor force similarly showed little change by dipping 383,000.

Nonfarm wage and salary jobs rose 41.400 (seasonally adjusted) in April, while the gains in March were revised to 74,400 from the previously reported 60,200.

As of the revised April numbers, California regained 91% of the nonfarm jobs lost to the state shutdowns. The rest of the states combined regained 95% of the jobs lost in the pandemic period. Within California, the seasonally adjusted numbers showed gains in most industries, with the increases led by Accommodation & Food Services (30,400), Professional, Scientific & Technical Services (7,300), and Government (4,600). Losses were in Other Services (-100), Mining & Logging (-100), Health Care & Social Assistance (-500), Arts, Entertainment & Recreation (-10,300), and Construction (-13,200).

The number of counties with an unemployment rate at 10% or more remained at 2. The unadjusted rates ranged from 1.9% in San Mateo to 11.7% in Imperial.